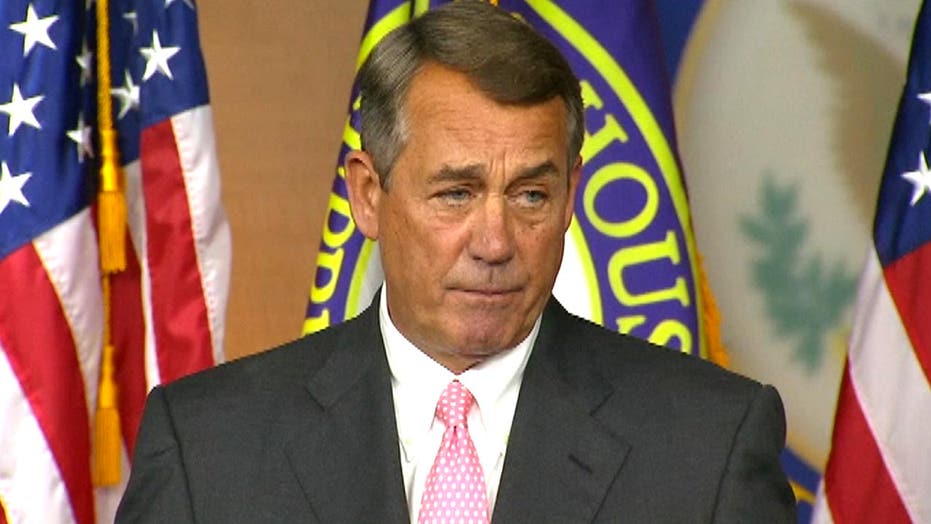 House speaker addresses his decision to resign; thanks family, staff and constituents

Whether it was "the right time," or a desire to end "this prolonged leadership turmoil" in the House -- or both -- John Boehner's bombshell announcement Friday to resign as speaker and leave Congress at the end of October had all the markings of a self-described "regular guy with a big job."

"Yep," Boehner told reporters, describing the sequence of events leading up to his decision -- which included a morning walk to Starbucks and a stop at the neighborhood diner -- "I think today's the day."

He first broke the news to his staff and then his House caucus Friday morning. Explaining the move to reporters, he simply said, "It's the right time."

The decision by the 13-term Ohio Republican shocked his colleagues, and will soon lead to a leadership battle as well as a special election in Ohio, in already tumultuous times. It comes amid mounting friction with the conservative wing of the party -- and one day after Boehner hosted a historic speech by Pope Francis to Congress.

Boehner, in a candid press conference, described what led to his decision -- a combination, it seemed, of concern for the institution and perhaps guidance from the pontiff himself.

The speaker said he actually had planned to announce in November, on his birthday, that he would leave at the end of the year. But he said he spent Thursday night thinking about the pope's address, and his "call to live by the golden rule." He said he told his wife and chief of staff he was thinking about resigning, and made the final decision Friday morning.

"The spirit moved him," one source said of the session with Pope Francis.

Boehner, though, stressed the final decision was not about the pope, as he was thinking of leaving anyway.

Boehner discussed his decision-making in trademark fashion, emotional at times and in plain language. He walked into the room singing "Zip-a-Dee-Doo-Dah."

The casual manner was in contrast to the shock on Capitol Hill from his decision. The speaker floored his GOP caucus early Friday morning when he informed them of his decision in a closed-door session. One lawmaker told Fox News he was "stunned," and that there was "some anger" in the room "against the people who caused this to happen."

The announcement came one day after the high point of Boehner's congressional career, the historic speech by the pope at Boehner's request. To the backdrop of that day's pageantry, though, Boehner was facing an internal battle in the House GOP caucus over Planned Parenthood funding and threats by some in the conservative wing to challenge his speakership.

Rep. John Mica, R-Fla., said Boehner "just does not want to become the issue. Some people have tried to make him the issue both in Congress and outside."

Conservatives have demanded that any legislation to keep the government operating past Wednesday's midnight deadline strip Planned Parenthood of his funds, a move rejected by more moderate lawmakers.

Boehner took over the speakership in January 2011. The decision to step down was closely held; Fox News is told House Majority Leader Kevin McCarthy, R-Calif., was only informed of Boehner's decision "one minute" before Boehner told the GOP conference.

McCarthy said in a statement Friday: "He will be missed because there is simply no one else like him. Now is the time for our conference to focus on healing and unifying to face the challenges ahead and always do what is best for the American people."

The decision took most leaders by surprise, including President Obama. He said at a press conference he called Boehner earlier Friday, adding "John Boehner's a good man. He is a patriot." Even though they often disagreed, Obama said, he conducted himself with "courtesy and civility."

A Boehner aide noted the speaker's original plan was to serve "only through the end of last year," yet former House GOP leader Eric Cantor's primary loss last year "changed that calculation." But the aide seemed to make clear reference to the internal turmoil.

"Speaker Boehner believes that the first job of any Speaker is to protect this institution and, as we saw yesterday with the Holy Father, it is the one thing that unites and inspires us all," the aide said. "... The Speaker believes putting members through prolonged leadership turmoil would do irreparable damage to the institution."

The aide added: "He is proud of what this majority has accomplished, and his Speakership, but for the good of the Republican Conference and the institution, he will resign the Speakership and his seat in Congress, effective October 30."

The House will need to hold an election to select a new speaker. The last speaker to resign in the middle of a Congress was Jim Wright, D-Texas, amid an ethics scandal in 1989.

Boehner's decision removes the possibility of a damaging vote to strip him of his speakership, a scenario that grew more likely amid the conservative clamor over a shutdown.

While the news Friday roiled Boehner allies, some conservatives welcomed his announcement.

Rep. Tim Huelskamp of Kansas said "it's time for new leadership," and Rep. Tom Massie of Kentucky said the speaker "subverted our Republic."

But more mainstream Republicans said it would be a pyrrhic victory for Tea Party-aligned lawmakers.

"The honor of John Boehner this morning stands in stark contrast to the idiocy of those members who seek to continually divide us," said Rep. David Jolly of Florida.

Boehner was first elected to the House in 1990 and soon established a strongly conservative record. He was part of former Speaker Newt Gingrich's leadership team when Republicans took over the House in 1995 for the first time in four decades but was ousted from his leadership role in the wake of the GOP's disappointing performance in the 1998 midterms.

He won a 2006 race to succeed Tom DeLay as the House's No. 2 Republican when DeLay stepped aside as majority leader. He took over as the top Republican in the House in 2007 after Democrats retook the chamber.

As speaker, his tenure has been defined by his early struggles to reach budget agreements with President Obama and his wrestling with the expectations of Tea Party conservatives who demanded a more confrontational approach.

In 2013, conservatives drove him to reluctantly embrace a partial government shutdown in hopes of delaying implementation of the new health care law.