Former President Bill Clinton, seen here in May, said impeachment hearings would have started already if a Democrat were in the Oval Office. (AP Photo/Bebeto Matthews, File)

Former President Bill Clinton argued Sunday that impeachment hearings would already be in full swing if a Democrat were in the Oval Office and if the special counsel’s investigation into Russian meddling in the 2016 election were as deep as it is now.

“I think if the roles were reversed — now, this is me just talking, but it’s based on my experience — if it were a Democratic president, and these facts were present, most people I know in Washington believe impeachment hearings would have begun already,” Clinton told “CBS Sunday Morning.”

Clinton, who appeared alongside James Patterson to promote the political thriller “The President is Missing” that the two penned together, noted that these are “serious issues” that the country is facing.

So far, the special counsel’s investigation, which is headed up by former FBI director Robert Mueller, has charged 19 people – including three former campaign aides of President Trump – along with three companies, and has received five guilty pleas. Perhaps the most high-profile of those guilty pleas came from Trump’s former national security adviser Michael Flynn.

Clinton, whose wife, Hillary, lost the 2016 election to Trump, is no stranger to impeachment hearings. After a lengthy investigation by independent counsel Ken Starr, the Republican-controlled House in 1998 voted to impeach Clinton for perjury and obstruction of justice in relation to the Monica Lewinsky scandal. 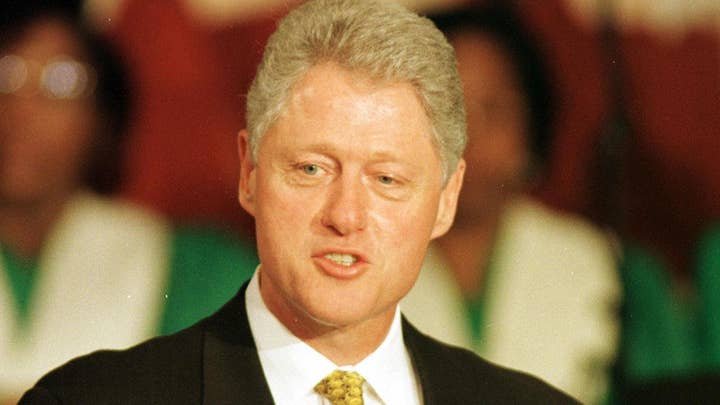 Clinton, however, was acquitted of both the perjury and obstruction of justice charges when the impeachment trial went to the Senate.

During the interview with CBS, Clinton also blasted Trump for the president’s bombastic style and his use of nicknames to poke fun at political opponents. Trump labeled Florida Sen. Marco Rubio “Little Marco” and Texas Sen. Ted Cruz “Lyin’ Ted” during the 2016 campaign season, has referred to North Korean dictator Kim Jong Un as “little rocket man” and continues to refer to Clinton’s wife as “Crooked Hillary.”

“I don’t like all this. I couldn’t be elected anything now ​be​cause I just don’t like embarrassing people​,” Bill Clinton said. “My mother would have whipped me for five days in a row when I was a little boy if I spent all my time badmouthing people like this.”

While the former president said that the press would have been just as “hard, or harder” in covering a Democratic president, he did defend the media against Trump habit of labelling certain news outlets as “Fake News.”

“I think they have tried by and large to cover this investigation based on the facts,” Clinton said.