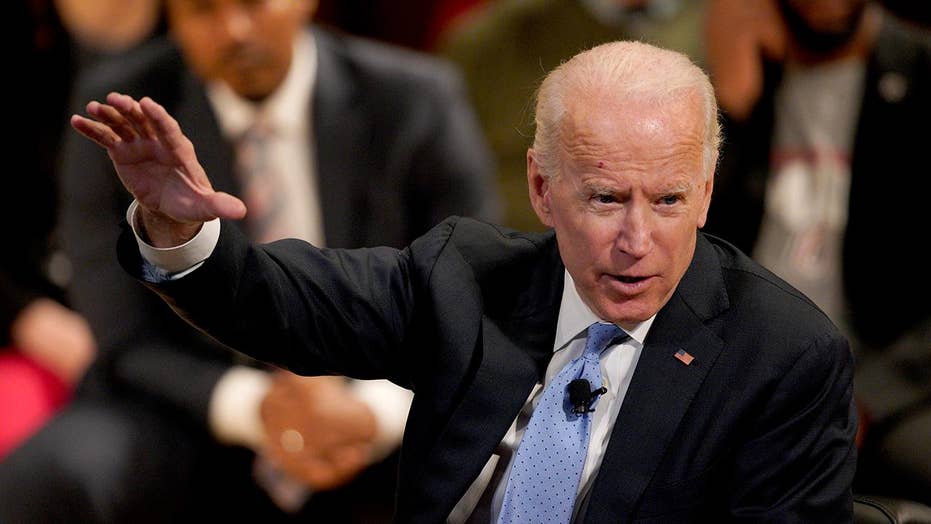 Would Joe Biden entering the 2020 race be good for Democrats?

Panel of Democratic voters weigh in on the 2020 presidential candidates on 'The Story.'

Biden was greeted with chants of “run Joe, run” as he took the podium in Washington, D.C. at the annual convention of the International Association of Fire Fighters (IAFF) union. Many in the crowd also were waving ‘Run, Joe, Run,’ and ‘Fire Fighters for Biden’ signs.

A few minutes later, during his keynote address, Biden said: “I appreciate the energy you showed when I got up here. Save it a little longer. I may need it in a few weeks.”

The comment brought a standing ovation from the audience.

Biden – who represented Delaware in the Senate for nearly four decades before becoming vice president under President Barack Obama – has been moving closer and closer to launching what would be his third bid for the White House.

Sources familiar with the planning of Biden’s inner circle last week confirmed to Fox News that top advisers to the former vice president are getting their ducks in a row, figuring out a campaign structure and reaching out to veteran Democratic operatives who would be involved. Those sources pointed to a likely April campaign launch.

An endorsement by the politically powerful IAFF also is likely in the works.

The IAFF, which represents more than 300,000 workers, has had a long and friendly relationship with Biden, dating back to his years in the Senate. And the union’s longtime general president Harold Schaitberger has been very vocal about his desire to see Biden run for the White House again.

Biden praised the firefighters in the audience, saying “there is really literally no group of men or women I’d rather stand with than all of you.”

“You are the heart and soul, the sinew and the backbone of this country,” he emphasized.

During his address, the former vice president made a spirited pitch for the 9/11 Victims Compensation Fund. The fund, which was opened in 2011 and compensates for the deaths and illnesses of people – including many first responders – due to exposure to toxins at the sites of the Sept. 11, 2001 terror attacks, has seen it payouts cut by as much as 70 percent.

“It must be permanently funded. Period!” Biden argued.

Biden went on to say that “I think about that time after 9/11 a lot these days. We were so united,” as he lamented the current state of politics. “Today we seem to be at each other’s throats. ... Mean pettiness has overtaken politics.”

BIDEN WALKS BACK PRAISE OF PENCE

Biden has led in recent Democratic primary polls even though he hasn't announced a campaign. But as he makes preparations, he's had to navigate the ever-changing politics of the party, including an ascendant liberal wing. He recently walked back comments calling Republican Vice President Pence “a decent guy” after criticism from some leading progressives.

“You notice I get criticized for saying anything nice about a Republican,” Biden said on Tuesday, apparently referencing the incident. “Folks, that’s not who we are. That isn’t how we got here.”

The former vice president highlighted that what defines the American people is that “in America, everyone gets a shot. That’s what the next president of the United States needs to understand and that’s what I think this current president doesn’t understand at all.”