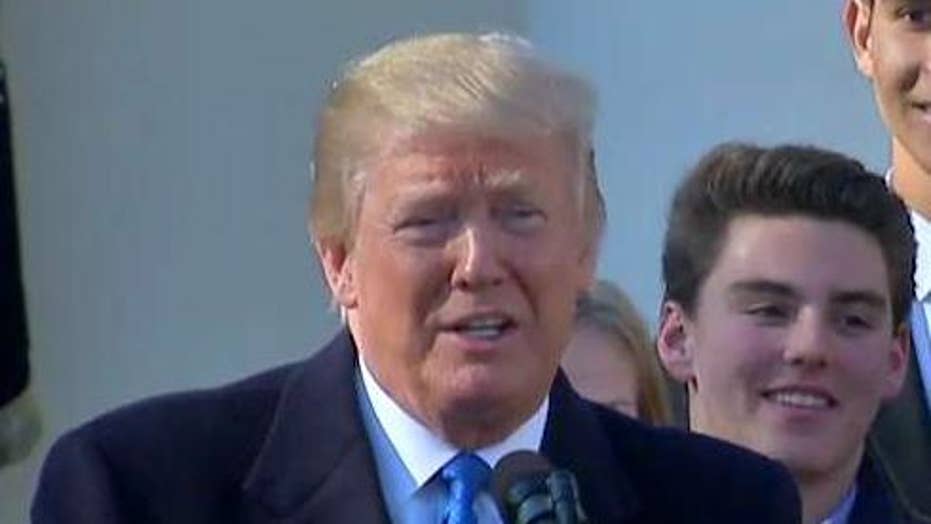 Trump: We will always defend the right to life

President Trump addresses pro-life leaders and advocates ahead of March for Life in Washington.

President Trump on Friday lamented how the United States, along with China and North Korea, allows late-term abortions in what was the first-ever live speech by a president to the pro-life activists of the annual March for Life rally in Washington.

“Americans are more and more pro-life,” Trump said in a speech in the Rose Garden that was streamed live to the crowd on the National Mall.

The president added: “We see that all the time. In fact, only 12 percent of Americans support abortion on demand at any time. Under my administration, we will always defend the very first right in the Declaration of Independence, and that is the right to life.”

The March for Life rally is held every year by pro-life protesters on the anniversary of the 1973 Roe vs. Wade Supreme Court decision that legalized abortion across the country.

“As you all know, Roe vs. Wade has resulted in some of the most permissive abortion laws anywhere in the world,” Trump told the crowd.

“For example, in the United States, it's one of only seven countries to allow elective late-term abortions, along with China, North Korea, and others,” the president said. “Right now in a number of states, the laws allow a baby to be born from his or her mother's womb in the ninth month. It is wrong. It has to change.”

MARCH FOR LIFE REMINDS US THAT ATTITUDES ON ABORTION ARE CHANGING

The speech came within hours of a possible government shutdown if Congress doesn’t pass a spending bill by midnight.

The president was introduced Friday by Vice President Mike Pence, who called Trump the “most pro-life president in American history.”

Friday’s event also coincides with the House passing the Born Alive Abortion Survivors Protection Act, which aims to protect the child in the aftermath of an attempted abortion and requires the abortion provider to take lifesaving measures, such as sending the child to a hospital.

This month, the Senate is expected to vote on the Pain-Capable Unborn Child Protection Act, which prohibits abortion after five months.

“I strongly supported the House of Representatives Pain-Capable bill, which would end painful, late-term abortions nationwide,” Trump said. “I call upon the Senate to pass this important law and send it to my desk for signing.”