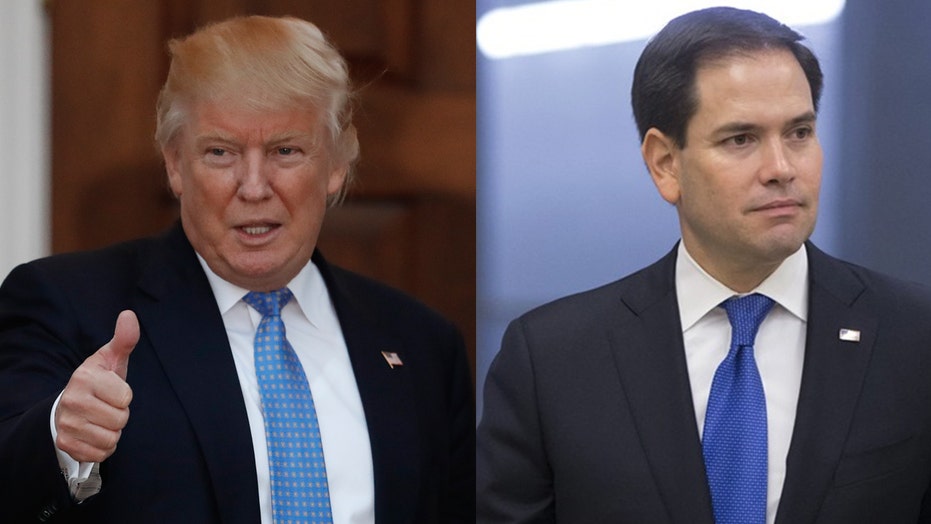 Will Trump agree to Rubio's move to crack down on China?

After Republican senators introduced legislation last week that would target Chinese interference in Hong Kong, questions linger as to whether Donald Trump’s hands-off foreign policy approach will go along with such measures – or if his anti-China rhetoric is limited to trade.

Sens. Marco Rubio, R-Fla., and Tom Cotton, R-Ark., who are on the Congressional-Executive Commission on China, introduced legislation last week that would slap sanctions on government officials in Hong Kong and China who restrict human rights and democratic freedoms in the semi-autonomous region.

Britain handed Hong Kong over to China in 1997 with the promise that it would keep a great deal of autonomy in terms of its political and economic structures – under the principle of “one country, two systems.”

Known as a “Special Administrative Region,” Hong Kong has its own government and is known for a commitment to free-market principles that has helped turned it into a major financial hub and a favorite of free-market economists, such as the late Nobel economic laureate Milton Friedman.

However, China has been increasingly interfering in Hong Kong’s autonomy in recent years, cracking down on anti-Beijing activists, intervening in decisions in Hong Kong’s legislature, and requiring loyalty oaths ahead of local elections in September. In 2015, five booksellers based in Hong Kong were abducted and held by Chinese authorities for months, triggering a global outcry.

“China’s assault on democratic institutions and human rights is of central importance to the people of Hong Kong and to its status as a free market, economic powerhouse and hub for international trade and investment,” Rubio said after the meeting.

Rubio and Cotton's bill -- the Hong Kong Human Rights and Democracy Act -- requires the president to “identify those responsible for the surveillance, abduction, detention, or forced confessions of certain booksellers and journalists in Hong Kong” and freeze the U.S. assets of such officials, and deny them entry into the country.

The move appears, on the face of it, to be out of step with previous positions held by President-elect Donald Trump who, in 2014, called on President Obama to “stay out” of pro-democracy protests in Hong Kong.

The bill also requires a yearly report from the Secretary of State on conditions in Hong Kong “of interest to the United States, including developments related to democratic institutions” and to require that the country is sufficiently autonomous before enacting new laws or agreements “affording Hong Kong different treatment” from China.

“The United States must lead the world in ensuring that the Chinese government ceases any repressive acts in Hong Kong and abides by its three-decade-old international commitment to respect the autonomy of Hong Kong," Cotton said.

Experts say the bill is likely to be effective at giving Hong Kong much-needed support and at nudging a wayward China back into line.

“Absolutely, all it has to do to be effective is for it to be enacted, because people in Hong Kong are looking for support,” Gordon Chang, columnist and author of 'The Coming Collapse of China,' told FoxNews.com. “When the U.S. supports them, that’s a big deal.”

Chang argues that the bill does something the U.S. rarely does – exercise its leverage against China.

“It will definitely spook China as it shows political will,” Chang said. “The U.S. has political leverage over China and we don’t use it because we’re trying to engage the Chinese and don’t want to upset them, and we think they have more power over us -- but that’s absolutely wrong.”

While President-elect Trump has repeatedly blasted trade deals that he says benefit China at the expense of the United States, and has threatened to label China a currency manipulator, it remains to be seen if he will extend that tough stance to the issue of human rights and democracy. The Trump transition team did not respond to a request for comment from FoxNews.com.

Mike Gonzalez, senior fellow for the Davis Institute for National Security and Foreign Policy, said it is difficult to predict what a Trump policy will be toward Hong Kong, but that Hong Kong dissidents have been unhappy with the approach of the Obama administration.

“We don’t know what President Trump is going to do, although he must be aware of Hong Kong’s importance as a businessmen and an entrepreneur,” he said. “We do know what has happened in the last eight years and that has not been a robust defense of human rights in Hong Kong.”

Top officials in Hong Kong have said they are taking a wait-and-see approach to the incoming Trump administration.

“I would say that this is still [in the] very early days. The election has just been completed. So we are waiting to see, for example, the appointments to key positions of influence, like the secretary of state, his team, and the Treasury etc.,” Clement Leung Cheuk-man, Hong Kong’s commissioner for economic and trade affairs in the U.S., told the South China Morning Post.

With the bill potentially not coming to a vote before Trump takes office, and with Beijing becoming increasingly aggressive in its interference in the region, the question of Hong Kong could be one of the first to face Trump when he takes office.

Chang told FoxNews.com that he believes Trump will eventually get on board with defending Hong Kong because the political stakes are ultimately too high to ignore.

“Once Beijing gets a victory, it’s not going to stop and that means we have to defend our values, as they have a full assault on us and our values and we have to recognize that they are an adversary,” he told FoxNews.com. “This is an existential struggle and they are going to carry on until they impose their values on the world.”