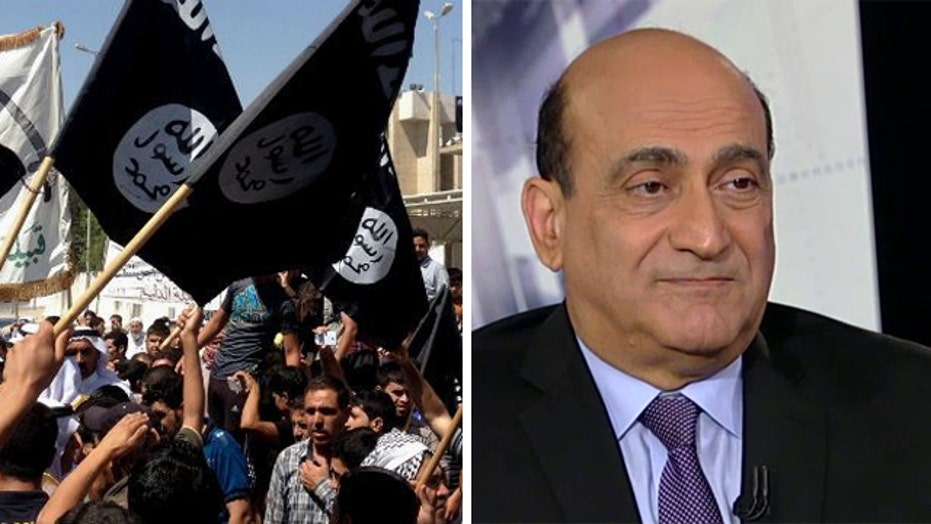 Concerns over global impact of ISIS getting stronger

The top American military officer said Sunday the success of the U.S.-led campaign to retake Iraqi territory hinges on getting more help from Arab nations, saying the Islamic State needs to be “squeezed from multiple directions.”

Army Gen. Martin Dempsey, the chairman of the Joint Chiefs of Staff, told reporters that more Arab participation in the effort is a prerequisite for President Obama's approval of the military campaign plan against the group, also known as ISIS or ISIL.

"If we can get ISIL looking in about five different directions, that's the desired end state," he said while traveling to Croatia from Lithuania, where he discussed Iraq and other issues with his NATO counterparts.

Dempsey stressed the importance of gaining more Arab participation in the U.S.-led effort, suggesting that without it the military campaign might not move to its next phase. Obama was briefed on the plan last week but has not okayed it.

"We want them to wake up every day realizing that they are being squeezed from multiple directions," he said.

In an opinion column published Sunday in the Tampa Bay Times, Obama wrote, "This is not and will not be America's fight alone. That's why we continue to build a broad international coalition." He said Arab countries have offered to help but he mentioned none by name and did not describe their specific roles.

The U.S. ambassador to the United Nations, Samantha Power, said the administration is pleased with its progress in building a coalition.

"The commitments are coming in every day," she said on NBC's "Meet the Press." However, she did not name individual Arab countries that have promised to participate in military action in Iraq, saying it was up to them to describe their own roles.

Obama's signature on the military campaign plan for Iraq and Syria operations would move the effort into a new phase, Dempsey said, enabled by a larger number of coalition aircraft that would allow for a more persistent presence over the battlefields of Iraq and improved prospects for rebuilding key elements of the Iraqi army.

Dempsey said last week that only about half of Iraqi army brigades, which originally were trained by the U.S., are suitable partners now for the U.S. On Sunday he said one of the major problems with the other half is that they have been infiltrated by extremists.

Dempsey focused his comments on military action in Iraq rather than Syria.

"We want to go from being episodic with our offensive operations to sustained," he said, adding that no one should expect a dramatic increase in airstrikes but rather a series of increases calculated to match Iraq's ability to retake territory with its own ground forces. Obama has ruled out U.S. troops fighting another ground war in Iraq.

Obama authorized U.S. airstrikes in Iraq on Aug. 8, and earlier this month he announced Washington would lead an international effort linked to the formation of a more inclusive government in Baghdad. That plan includes the prospect of U.S. airstrikes in neighboring Syria, but Dempsey has said the Pentagon's first priority is pushing the military campaign in Iraq.

A number of Iraq's Arab neighbors, including Jordan and Saudi Arabia, have said they support the U.S. effort but have not publicly committed to taking any offensive role in Iraq. France is the only ally that has joined thus far in airstrikes in Iraq.

Having more Arab countries involved would make the Iraq campaign more sustainable and "more credible -- that is to say, this is not just about the United States; this is a regional and even an international issue," Dempsey said.

The general said he spoke to his Turkish counterpart during the weekend NATO meeting in Lithuania about Turkey's role in the conflict. He said the allied military chiefs also discussed the prospect of NATO playing a part in training and equipping Iraq security forces, although no decisions were made.

Dempsey said he has no estimate of how many coalition forces he would like to see join with the U.S. in fighting the Islamic State group in Iraq, but he ticked off a list of military capabilities that he hopes can be provided by Arab nations and others. These include intelligence sharing, aerial refueling aircraft, surveillance and reconnaissance planes, precision strike aircraft, and financial assistance for the training and equipping of Iraqi troops as well as the Syrian moderate opposition.

Over time, Iraqi security forces and Kurdish militia should be able to capitalize on coalition airstrikes by executing offensive ground operations to retake territory now under Islamic State group control, Dempsey said. This already has begun with limited Iraqi advances in Babil province south of Baghdad, he said, where he said the extremists have been marshalling their forces.

Without mentioning specific provinces or towns, the U.S. in recent days has announced airstrikes on areas south of the Iraqi capital. On Saturday, for example, it said one strike southwest of Baghdad destroyed an Islamic State group boat ferrying supplies across the Euphrates River. And on Friday it said it hit a small Islamic State group ground unit southwest of Baghdad.