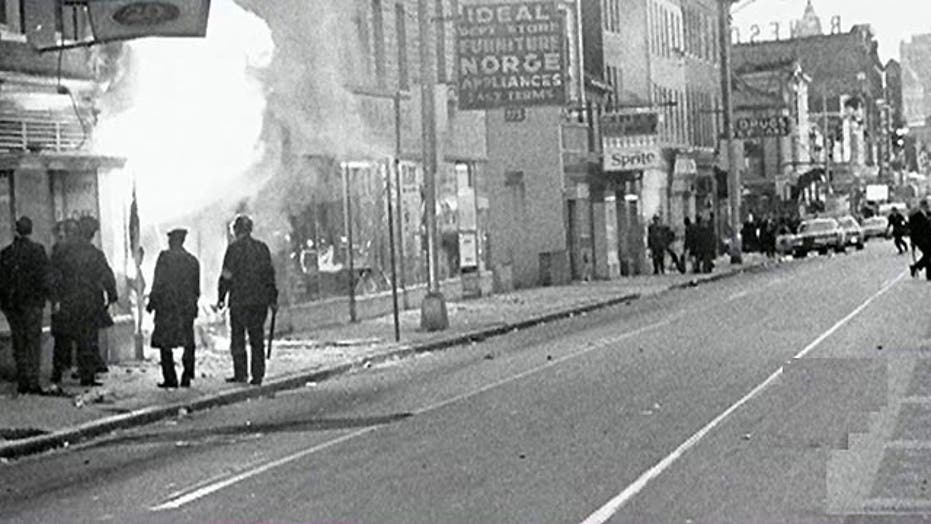 The politics behind Baltimore's blight

Have policies of the past failed the city?

"This has been a slow-rolling crisis,” President Obama said at the White House on Tuesday, standing alongside the Japanese prime minister. “This is not new, and we shouldn’t pretend that it’s new.”

In that assessment of the origins of the Baltimore riots, the president is assuredly correct. At the National Archives, official custodian of America’s historical heritage, the files of the U.S. Army’s Office of the Chief Signal Officer (Record Group 111) contain the collection of motion picture films maintained by the Army Library. And tucked away in the Army Library’s inventory of film footage is an entry labeled “Baltimore riots, Baltimore, Maryland, 04/07/1968 - 04/09/1968.” This covers the period shortly after the assassination of Martin Luther King, Jr., and the National Archives’ summary of the footage reads, in part:

Pans [across] city of Baltimore... Soldiers march in street. Firemen turn hose on burning building... Smoke from fire in distance... Prisoners are taken into courthouse... Troops in lock-step move down street... Storekeepers clean wreckage around stores...

Once again, to quote the president from the event with Prime Minister Abe: “This has been going on for a long time.”

Then, as now, one can observe in the commentary on Baltimore the emergence of two distinct camps: the Literalists and the Impressionists. As in art, the Literalists embrace realism and regard both life and the larger universe as reducible to particulars: Objective facts can be established, any scene can be rendered in minute and unfailingly accurate detail.

In the theater of sadness that was West Baltimore this week, the Literalist camp paradoxically united two rather disparate groups of onlookers: those who remained fixed on the facts surrounding the death of Freddie Gray in police custody, including chief prosecutor Marilyn Mosby, a Democrat, and many activists in the African-American community; and those who, like former New York City Mayor Rudolph Giuliani, a Republican, vocally decried the lawlessness in the streets and demanded a more robust response by law enforcement.

“It is my job to examine and investigate the evidence of each case,” Mosby said when, on Friday, she announced the indictment of six Baltimore police officers in Gray’s death.

“Here is the rule I had with my police department and my police commissioner,” Giuliani recalled on “Hannity” on April 28. “First rock, get arrested. Second rock, get arrested.” Despite their divergent worldviews, both Mosby and Giuliani, himself a former prosecutor, adopted the strict Literalist view, in the sense that they were apt to see the action unfolding in Baltimore in concrete, factual, even numerical terms. Every victim of police brutality and every lawbreaker in the rioting – “each case,” as Mosby put it, and the thrower of even a single rock, as Giuliani put it – must swiftly be brought before the bar of justice.

The Impressionists on the scene in Baltimore, however, are more inclined to move beyond the specifics, to see before their eyes something more than a demolished CVS. The Impressionists eschew the particular for generalization; they paint in broad strokes and speak not of specific cases but of sweeping historical dynamics and trends.

“It has nothing to do with West Baltimore or this particular corner in Baltimore,” said Democratic City Councilman Nick Mosby, husband of Marilyn, to my intrepid Fox News colleague Leland Vittert, amid the final flashes of smoke and looting on Monday night. “What it is, is young folks of the community showing decades old anger, frustration, for a system that's failed them. I mean, it's bigger than Freddie Gray. This is about the social economics of poor urban America.”

Both sets of onlookers of the moral decay on display this week, the Literalists and the Impressionists, are indeed recording the Baltimore Riots of 2015 with strong doses of accuracy. Where some see the commission of thousands of discrete criminal acts, many captured on video, others peer through an invisible veil to glimpse the effects, as Mosby put it, of “a system that’s failed.”

If the Impressionists are correct, then those interested in redress of Baltimore’s multiple ills will show a keen interest in more information about how and why the system that failed wound up doing so in such spectacular fashion. Once again, the enterprise could be guided by a Literalist point of view or by a more Impressionist sensibility; but in the more neutral terms of political science – a discipline that employs a blend of science and art, and in which this writer earned his bachelor’s degree at The Johns Hopkins University in 1980s Baltimore – a natural starting point for investigation would be the governments of Baltimore and Maryland.

Of those governments, perhaps the most salient fact to the objective political scientist, tasked with anatomizing the failed system, would be that both governments have long effectively functioned as one-party systems. Baltimore last had a Republican mayor, Theodore M. McKeldin, in 1967. (A wire photograph from April 1966 captured McKeldin, a bear of a man, chatting amiably with Dr. King in Baltimore, two years before the civil rights leader’s assassination in Memphis.) Maryland elected its incumbent Republican governor, Larry Hogan, in November – but that made Hogan only the second GOP governor in the Old Line State since 1969.

Incumbent mayor Stephanie Rawlings-Blake, a Democrat, deals with a city council comprised 100 percent of fellow Democrats. Other important power blocs in the political and civic life of Baltimore are likewise controlled by Democrats, such as educational institutions and public-sector unions.

In systemic terms, one-party control is generally considered unhealthy and to many eyes the record of one-party government in Baltimore, measured in the usual societal metrics, demonstrates as much with crystalline clarity.

Nor is scarce funding necessarily the issue. According to data compiled by the U.S. Census Bureau and Department of Education, Baltimore in Fiscal Year 2012 spent an average of $15,287 on each elementary and secondary school student, an investment that ranked Baltimore third, behind New York and Boston, on the list of top spenders among the country’s 100 largest school systems by enrollment. And yet recent studies have shown only 16 percent of Baltimore’s eighth graders score at or above grade level in reading, only 13 percent for math.

With Baltimore’s rates of violent crime and poverty also far worse than the national average, far worse than the numbers Baltimore posted fifty years ago – before American taxpayers spent an estimated $16 trillion in the war on poverty and other Great Society initiatives – some see the “system” that Nick Mosby lamented as having “failed” Baltimore’s young people as one that offers discernible lessons for public policy and how society can best tackle what Mosby called “the social economics of poor urban America.” In short, they see – in a highly Impressionistic way, of course – liberalism itself on trial in Baltimore.

“It’s a group of politicians that believe that the answers to everything lies in ever bigger government and ever more government spending,” said Michael Tanner, a senior fellow at the right-of-center Cato Institute think tank in Washington, of the political class that presided over Baltimore’s long- and short-term deterioration. “We understand the basics about how to get out of poverty. Number one, for example, has to do with a good education….We’re spending a huge amount of money on schools, not educating students, and you end up with a lot of kids in poverty.”

Juan Williams, the left-leaning journalist, author, and Fox News contributor, noted the “white flight” that had taken place in Baltimore over the last several decades, a “larger, racial dynamic” that he said hastened the deterioration of the cities into “basically the hole in the middle of a prosperous doughnut, oftentimes surrounded by very well-to-do suburbs.” Yet the communities that remained in Baltimore, even as the city shed one-third of its white population, starting in 1960, remain entitled to effective governance, Williams emphasized. “They still have a right to expect from their politicians results and accountability, and here we would have to admit to failure in terms of Democratic Party politics – and policies.”

One elected official in Baltimore rejected this indictment of liberalism running through the commentary of recent days. City Councilman Carl Stokes told Fox News: “We can go to other cities that are conservative, that have been run by other parties, and I'm going to tell you, you're going to find places where things are bad also.”

In fact, because Democrats tend to run most major American cities, examples to support Stokes’ claim are not easy to find. In Indianapolis, where the population exceeds Baltimore’s by about 25 percent and the two-term mayor is a Republican, homicides have surged to some of their highest numbers in a decade; however the city council is narrowly controlled, 15-14, by Democrats. And in Rockford, Illiniois, where the population of 150,000 is not even one-quarter of Baltimore’s, the poverty rate equals Baltimore’s and Rockfordians experience more violent crimes per 100,000 residents than all but seven other cities. Rockford’s mayor, however, is an independent and the city council is narrowly controlled, seven to six, by Republicans.

Almost 88 percent of Baltimore voted for President Obama in 2012. And earlier this year, Obama indicated that he has in turn been impressed by the governance he has observed in Baltimore – at least since 2011, when Mayor Rawlings-Blake assumed office. In remarks to the U.S. Conference of Mayors in the East Room in January, Obama singled her out by name and said he was “proud” of her.