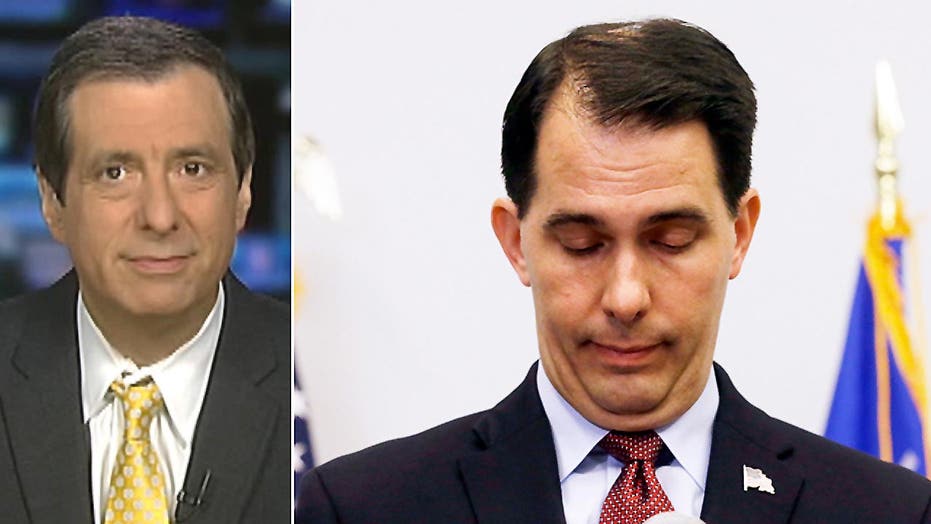 Since Scott Walker called for a Stop Trump effort in bowing out of the presidential race, it’s easy to conclude that he was vanquished by The Donald.

And that’s not quite right. The Wisconsin governor vanquished himself.

In the harsh glare of the national spotlight, he just wasn’t a very good candidate.

Walker was prematurely hyped by the media, boosting expectations to a level he had no hope of meeting. He peaked too soon and could never find his footing.

Walker is a competent governor but a boring guy who found himself trying to compete in a Trumped-up atmosphere. By the final weeks, the man who shops at Kohl’s was shouting at a crowd that he was “unintimidated,” and just looked uncomfortable on the trail, as he did taking questions from the Fox and CNN moderators.

I’ve never seen a presidential candidate drop out and urge others to do so, but that was Walker’s plea—perhaps to give meaning to his move and lash out at the “personal attacks” by Trump. Don’t hold your breath waiting for others to follow.

Walker didn’t have to quit on Monday, even though he had dropped below 1 percent in national polls and his fundraising had dried up. He could have hobbled along and hoped for an upturn in his fortunes. But he has a day job—an actual state to run—and for him to turn into a punchline would have hurt him at home. So he chose a dignified exit.

I watched with amazement as the media utterly hyped Walker’s chances based on a single punchy speech he gave in Iowa last January. That led to rising poll numbers, which in turn produced more good press. It was the worst thing that could have happened to Walker.

He soon started ducking questions, such as his stance on evolution, and complaining about “gotcha” questions. Then he dialed way back on interviews, took two overseas trips and didn’t talk to reporters. That signaled to me a candidate who wasn’t confident.

When Walker reemerged, it was clear that he wasn’t ready for prime time, especially on foreign policy. It didn’t help that he compared fighting ISIS to battling public employee unions in Wisconsin. Asked on CNBC about Rudy Giuliani’s remark that he didn’t think Barack Obama loved America, Walker said: “I’m not going to comment on what the president thinks or not.”

I wrote this in July: “When I met Walker, he struck me as a meat-and-potatoes guy: Solid, disciplined, earnest, the son of a Baptist preacher was not at all flashy. That means he could wear well over a long campaign, but could also be overshadowed on a debate stage.”

Things soon reached the point where Walker had trouble giving straight answers to media questions. After Trump called for repealing birthright citizenship, Walker took three different positions in interviews over seven days. He was so eager to appear tough on illegal immigration that he allowed himself to muse about the possibility of building a fence along the Canadian border.

Of course, running on a governor’s record in a year of fierce anger at politicians and politics as usual didn’t help.

Liz Mair, the GOP strategist who briefly worked for Walker’s campaign before being dumped over past controversial tweets, ripped her former boss:

“Things he got wrong: Misunderstanding the GOP base, its priorities and stances. Pandering. Flip-flopping…

“Becoming so invested in winning, no matter what it took, that he lost sight of his real identity as a political leader.”

So what does Walker’s exit mean for other single-digit candidates, beyond the usual scramble for donors and organizers?

It leaves John Kasich as the only Midwestern governor; Chris Christie as the tough-talking governor; Jeb Bush as the ex-governor running on his record, albeit with far more money; Marco Rubio as the fresh young face, and Ted Cruz as the anti-establishment senator.

It means if one or two contenders follow the lead of Walker and Rick Perry, we’ll be done with the undercard debates.

It leaves Trump, Ben Carson and Carly Fiorina, the non-politician brigade, at the head of the field, with Carson spending yesterday trying to explain away his comments about not advocating a Muslim for president.

Scott Walker was a strong candidate on paper. But elections, as we keep learning, aren’t won on paper.