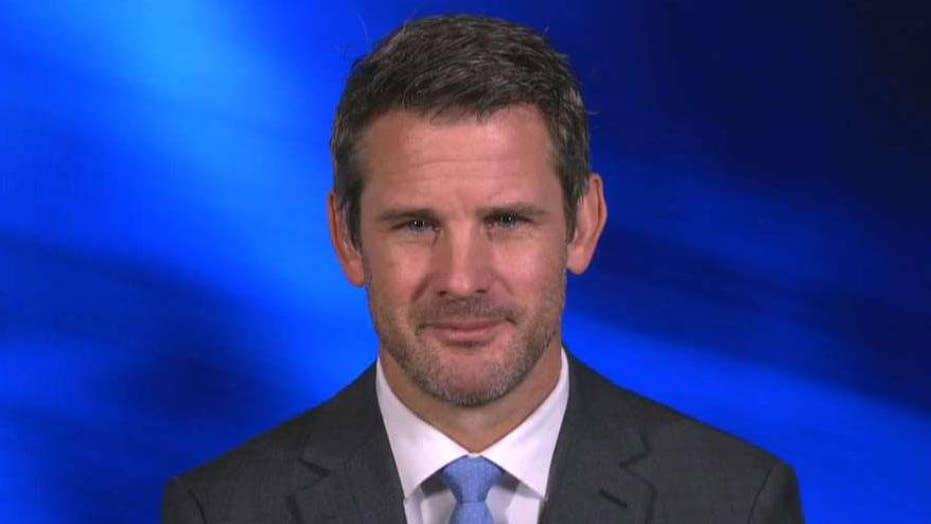 Illinois Republican Rep. Adam Kinzinger weighs in on escalating tensions between the U.S. and Iran.

Rep. Adam Kinzinger, R-Ill., told Fox News on Sunday he would have ordered military strikes against Iran in response to mine attacks on two oil tankers in the Gulf of Oman last week, but added that President Trump was not wrong to hold off on ordering such action so far.

"I think it needs to be clear, and hopefully it is clear to Iran, that basically, this is it," Kinzinger said on "America's News HQ." "This is about the extent of what we'll accept. This is the sixth tanker they've damaged, plus the fact that a quarter of American troops killed in Iraq were killed by Iran, and there's a point at which we've had enough."

IRAN TRIED TO SHOOT DOWN US DRONE THAT ARRIVED ON SCENE OF OIL TANKER ATTACKS, OFFICIALS SAY

A senior U.S. official told Fox News this weekend that the Iranians fired on an American MQ9 Reaper drone shortly after the aircraft arrived at the scene of the tanker explosion Thursday. Fox News also has learned Iran-backed Houthi rebels in Yemen shot down a second U.S. drone in recent days.

Secretary of State Mike Pompeo told "Fox News Sunday" that there was "no doubt" the explosions were the work of Iranian forces.

"These were attacks by The Islamic Republic of Iran on commercial shipping, on the freedom of navigation, with a clear intent to deny transit through the Strait [of Hormuz]," Pompeo said. "The intelligence community has lots of data, lots of evidence -- the world will come to see much of it. But the American people should rest assured we have high confidence with respect to who conducted these attacks as well as half a dozen other attacks throughout the world over the past 40 days."

Iran has denied being involved in the attacks and accused America of promoting an "Iranophobic" campaign against it.

Kinzinger described Iran as "a weak country that, because of the reimplementation of sanctions and the pulling out [by the Trump administration] of the Iran nuclear deal, is now lashing out.