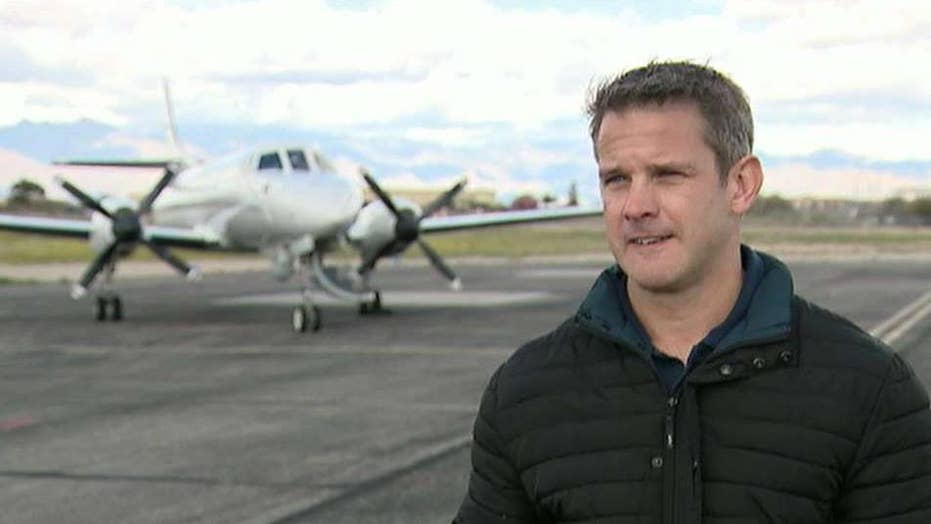 At a time when most people are wrapping up their day, Illinois Congressman Adam Kinzinger is headed to work. He is not going to the office in Washington D.C., but out past a hangar toward a plane, an RC-26 surveillance aircraft.

It’s the plane Kinzinger will fly for the next five hours (one of its primary advantages — being able to fly and work, undetected, longer than most other aircraft.)

“I love to be able to do it,” Kinzinger told Fox News.

The two jobs could not be in more different.

“I have some colleagues,” Kinzinger said of his job in Washington, “they have let their position get to their head a little bit.”

He said people are treated differently, for better or for worse, when they are in Congress.

All that changes when he drills with the guard.

“When I deploy with these guys, it’s just my old buddies,” said Kinzinger. “They say basically, ‘Hey, you are a lieutenant colonel here. Nobody special.’”

The work they are doing is part of a larger deployment to help bolster security along the Arizona border. The RC-26 Kinzinger flies may look like a corporate jet, but it’s specially equipped to gather information and high-resolution video of any illegal activity they may spot, on the ground.

Unlike other areas, some of the Arizona border is mountainous.

“We have over 200 miles of border out here that’s just almost unmanned. No fencing on it at all,” Lt. Col Kenneth Bruce with the Arizona Air National Guard told Fox News. “We have a lot of traffic through there.”

It can be difficult for border patrol not only to spot illegal activity, but to respond to it. But with eyes in the sky, border patrol agents are able to hone in on drug activity that might otherwise unnoticed.

At a time when most people are wrapping up their day, Illinois Congressman Adam Kinzinger is headed to work. He is not going to the office in Washington D.C., but out past a hangar toward a plane, an RC-26 surveillance aircraft.

“They are very difficult to find,” said Ron Bellavia, the acting deputy chief patrol agent for the Tucson sector. “They are crossing the border in camouflage. They are putting carpet on their shoes, so we cannot track them through the desert.”

After potential drug runners are spotted, army guard helicopters can fly agents to those remote areas to respond.

Kinzinger said the work is gratifying.

“When drugs come into Arizona, they end up in Illinois,” he said. “To protect this country from, frankly, all the drugs that are coming over, is awesome.”

At the end of his two weeks of duty, Kinzinger will go back to his other gig – the one in Washington – with a fresh perspective on how the decisions he and his colleagues make impact the country. It’s a perspective he wishes more lawmakers had.

“I think Congress would be in a better spot,” said Kinzinger.

He said he’s open to going on another mission.

“It’s not the first time I’ve done it,” said Kinzinger. “Hopefully, it’s not the last.”

About 1,800 National Guard troops are currently deployed across the entire southern border, 600 of those in Arizona. That’s in addition to the active duty troops who’ve been deployed to assist at the border, per President Trump’s request.