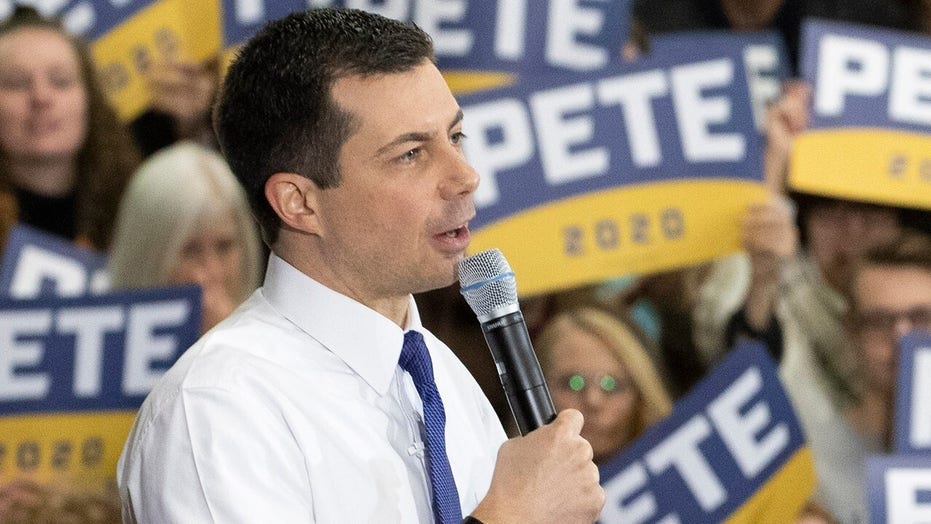 The winner of the 2020 presidential election is almost certainly in New Hampshire, and the crowds candidates are drawing at events around the state offer clues as to who has momentum for Tuesday’s high-stakes primary and beyond.

As President Trump pulled in a crowd of thousands at a Monday night rally at Manchester’s SNHU Arena, the Democrats seeking his job also crisscrossed the Granite State to appear at town halls, auditoriums and diners in a frantic push to win over voters in the nation's critical first primary.

The outcome of the Republican primary in New Hampshire is almost certainly going to be a Trump win, but the president is taking advantage of the heightened attention on the state as he flew into its most populous city for a rally Monday. Thousands of supporters packed into the arena for the president's rally.

SNHU Arena has a capacity of 11,770 for concerts, according to its website, well within what the president has been able to pack in for previous rallies. All day, crowds were waiting outside the arena in cold, wet weather.

Attendees saw an emboldened Trump, still riding the wave from a successful week that included his State of the Union Address, acquittal on two articles of impeachment, an easy win in the Iowa Republican caucuses and a set of longwinded, stream-of-consciousness remarks to an adoring audience Thursday in the East Room as he celebrated his impeachment acquittal.

Trump supporters aren't the only ones out in Manchester, however. A group of progressive Evangelicals called "Vote Common Good" appeared to protest Trump's rally.

"We are inspiring, energizing, and mobilizing people of faith to make the common good their voting criteria and to pursue faith, hope & love for a change on election day 2020 and prevent the re-election of Donald Trump," the group said on its website.

Sen. Elizabeth Warren, D-Mass., held a "Get Out the Vote" at the Rochester Opera House on Monday afternoon, drawing about 225 people, the campaign told Fox News.

Later Monday, Warren held a 5:45 p.m. town hall at Portsmouth's South Church, which a year ago squeezed in about 1,000 people for a Kamala Harris campaign event, according to her former press secretary.

But before her afternoon and evening activities, Warren spent the morning trudging through the snow on a 2.2-mile walk which included a stop for some McDonald's breakfast.

On Monday afternoon, Warren seemed to take a shot at two Democratic presidential candidates who aren't in Iowa: former New York Mayor Michael Bloomberg and former businessman and philanthropist Tom Steyer, who are both using their fortunes to blanket the airwaves in Super Tuesday states.

"We can do this," she said. "This is about winning unwinnable fights. People think the folks with the money are alway gonna win -- they don't know what they're up against! It's the folks with persistence who are going to win!"

Sen. Bernie Sanders, I-Vt., appeared at four New Hampshire events by the time Monday was over, including a breakfast in Manchester, a town hall at Franklin Pierce University, a canvassing event in Hudson and a rally at Whittemore Center Arena in Durham, which can fit 7,500 of Sanders' adoring supporters.

A crowd of 7,532 attended the event, Sanders campaign spokesperson Erika Mantz said, making it the largest crowd for any campaign event in the state by a Democratic candidate in the 2020 election cycle.

The self-proclaimed democratic socialist will entertain his rallygoers with a performance from The Strokes and an appearance with Rep. Alexandria Ocasio-Cortez, D-N.Y. Photos showed a big crowd of supporters in line for the event.

During Sanders' event in Hudson, he was asked about a new Quinnipiac poll showing that he leads the Democratic field nationally, which he turned into a boast about the expected size of his Monday night event.

"Polls are fine," he said, "but winning elections are more important ... We're gonna have, I believe, the largest Democratic event in this cycle tonight in Durham."

Pete Buttigieg, the surging former mayor of South Bend, Indiana, had a meet-and-greet at Plymouth State University at 10 a.m. ahead of two rallies later in the day -- one at 5:30 p.m. at Hampshire Hills Athletic Club in Milford and another at Exeter High School in Exeter at 8 p.m.

Buttigieg --  riding a wave of his self-declared Iowa victory that landed him on the front pages of the New Hampshire papers -- drew a large crowd of attendees to his primary eve rally.

Sen. Amy Klobuchar, D-Minn., who is enjoying a bit of a surge after an impressive debate performance Friday night, is packing four events into her Monday schedule. She held a "Get Out the Vote" event in Keene at 9 a.m. before a noon event at Nashua Country Club in Nashua, N.H.

She also had a 3 p.m. event at Exeter Town Hall and scheduled 7 p.m. event at the American Legion in Rochester, which says on its website it can hold 600 people. The events have been drawing larger crowds, amid the surge in interest in her campaign.

Former Vice President Joe Biden is looking to stop the bleeding in New Hampshire after a "gut punch" in Iowa, and he might be able to pick up some momentum Monday thanks to the endorsement from New Hampshire Senate President Donna Soucy.

The former vice president's itinerary includes an 11:30 a.m. "Get Out the Vote" event at Gilford Community Church, which can hold up to 400 people, and a 6:15 p.m. event at St. George Greek Orthodox Cathedral, another cavernous house of worship.

Earlier Monday, Biden also doled out some breakfast pastries to school bus drivers and one kid in Nashua.

Republicans mocked Biden on social media, comparing the attendance of supporters to those lining up for Trump's speech.

Rep. Tulsi Gabbard, D-Hawaii, who has spent more time in New Hampshire than any other candidate but has struggled to register at anything above mid-single digits in the polls, held a town hall at The Rex Theatre in Manchester. That venue seats 300 people.

Businessman Andrew Yang, still reeling from a dismal finish in Iowa, was the busiest candidate in the field Monday. In what might be the last gasp for his unconventional campaign, Yang is holding six events on the day before the New Hampshire Primary.

His stops include town halls in Rochester, Concord, Portsmouth, Manchester, Derry and Keene. Yang's 8 p.m. stop at Tupelo Music Hall in Derry could draw up to 700 people, according to the capacity on the music hall's website.