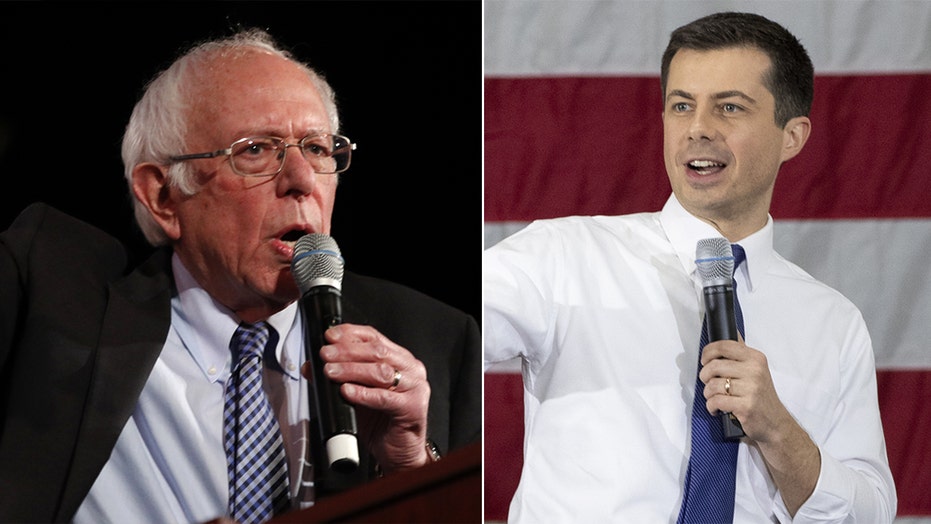 The fight between progressive and more moderate Democrats was expected to be Elizabeth Warren vs. Joe Biden; Peter Doocy reports from Gilford, New Hampshire.

MANCHESTER, N.H. – On the eve of New Hampshire’s presidential primary, one of the final public opinion polls in the first primary in the race for the White House indicates Sen. Bernie Sanders with a clear lead, former South Bend, Ind., Mayor Pete Buttigieg slipping and Sen. Amy Klobuchar of Minnesota surging.

Sanders stands at 27 percent support among likely Democratic presidential primary voters in New Hampshire, according to the final Suffolk University daily tracking poll for the Boston Globe and WBZ-TV.

The survey shows Buttigieg at 19 percent in the survey, which was conducted Saturday and Sunday and released late Sunday night. The 38-year-old candidate’s support has dropped 6 percentage points over the past two nights.

“We are measuring a continued upward trend for Amy Klobuchar at the expense of Pete Buttigieg,” said Suffolk University Polling Research Director David Paleologos. “This could be a temporary spike of support that might settle back on Tuesday, but if her trajectory continues, she could possibly send Joe Biden or Elizabeth Warren into the fifth spot which would be a devastating blow to one of those campaigns."

Former Vice President Joe Biden and Sen. Elizabeth Warren of neighboring Massachusetts each stand at 12 percent support in the poll.

Rep. Tulsi Gabbard of Hawaii and tech entrepreneur Andrew Yang each register at 3 percent, with environmental and progressive advocate Tom Steyer at 2 percent, former Massachusetts Gov. Deval Patrick at 1 percent and Sen. Michael Bennet of Colorado at less than 1 percent.

Granite State voters are traditionally late deciders and 7 percent of those questioned said they’re still undecided. Thirty-eight percent of those backing a candidate indicated they could change their minds before they vote on Tuesday.

Sanders was also in the lead in the final tracking poll by the University of New Hampshire for CNN.

The survey – which was conducted Thursday through Sunday and released Monday afternoon – indicated Sanders at 29 percent support, with Buttigieg at 22 percent, Biden at 11 percent, Warren at 10 percent and Klobuchar at 7 percent. Every other candidate tested registered at 5 percent or less.

Only about half of likely Democratic primary voters questioned in the UNH poll said they’ve definitely decided on whom they’ll support in Tuesday’s contest.

Smith also pointed to an edging up for Biden this weekend, noting that “he may have stanched at the debate some of the bleeding he had coming out of Iowa.”