Former DCC deputy executive director Ty Matsdorf and former NRSC chief digital strategist Tim Cameron weigh in on what can viewers can expect from candidates on night one of the first 2020 Democratic presidential debate.

It may come as no shock that Democratic senators currently running for president have opposed nearly all of President Trump’s judicial nominees this year -- but newly reported voting data shows some of those same lawmakers backed a surprising number of the president's court picks before the election season began.

Sen. Elizabeth Warren, D-Mass., for example, voted in favor of 46 percent of Trump’s nominees from 2017-2018, according to data compiled by Demand Justice. Yet the figures, obtained and reported by Politico, show that in 2019, that number shrank to zero.

Two other 2020 candidates, Sens. Bernie Sanders, I-Vt., and Kirsten Gillibrand, D-N.Y., also rejected every single one of Trump’s picks this year, when in previous years they each approved 47 percent. 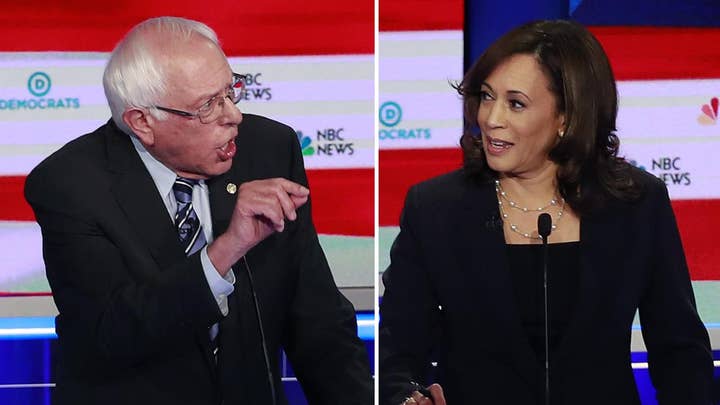 "They’ve lost their minds," Sen. John Cornyn, R-Texas, told Politico. "It’s just reflexive so I don’t think it’s any reflection on the nominees in particular. They’re just opposed to anything and everything the president is for."

Even those who approved the majority of the president’s judicial nominees during the first two years of his term have reversed course. While Sen. Amy Klobuchar, D-Minn., approved 64 percent of Trump’s picks in past years, this year saw just a 3 percent approval rate. Sen. Kamala Harris, D-Calif., went from 51 percent down to 6 percent. Sen. Cory Booker, D-N.J., had approved almost half in the past, at 49 percent, and stands at 11 percent this year.

"American voters made their voices heard on this issue in 2016, they want independent judges who fairly apply the law and adhere to the Constitution," Trotter told Fox News. "Trump has delivered those kinds of judges for the American people and it's only radical Democratic politicians who are standing in the way."

A spokesperson for Warren, meanwhile, told Politico that the senator “holds every nominee to the high standard appropriate for a lifetime appointment to the federal judiciary,” and accused the GOP and the president of failing to do the same. The Warren campaign did not immediately respond to a Fox News request for additional comment.

A representative for Klobuchar acknowledged there has been a downward shift in “every single Democratic Senator’s support,” blaming it on a rule change enacted by Republicans who control the Senate.

In past years, it was common for potential judges to receive approval from both of their home state’s senators before their nomination moved forward. That changed during Trump's presidency. In 2018, then-Senate Judiciary Committee Chairman Sen. Chuck Grassley, R-Iowa, stopped requiring senators' approval, allowing Trump to get judges on the court who did not have the approval of their senators.

The Ninth Circuit, for instance, was known largely as a liberal jurisdiction until President Trump started placing conservative judges on the bench. Now, the number of conservatives is catching up to the number of liberals on the court, with Trump poised to take advantage of even more recent openings on the bench. The Ninth Circuit includes California, whose senators include Harris.

In January, Harris vowed to “oppose every nominee to an appellate court” until Trump institutes a more “fair process.”

Several Democrats have proposed countering Trump's judicial picks with their own measures. Candidates including Booker, Warren, Harris, and Gillibrand have signaled their openness to increasing the number of Supreme Court justices if they enter the White House.

Sanders has opposed this practice, known as court packing, but suggested rotating justices to other courts in order to provide "new blood" to the Supreme Court. Former Vice President Joe Biden similarly came out against court packing, warning that if Democrats take that approach, "we’ll live to rue that day."