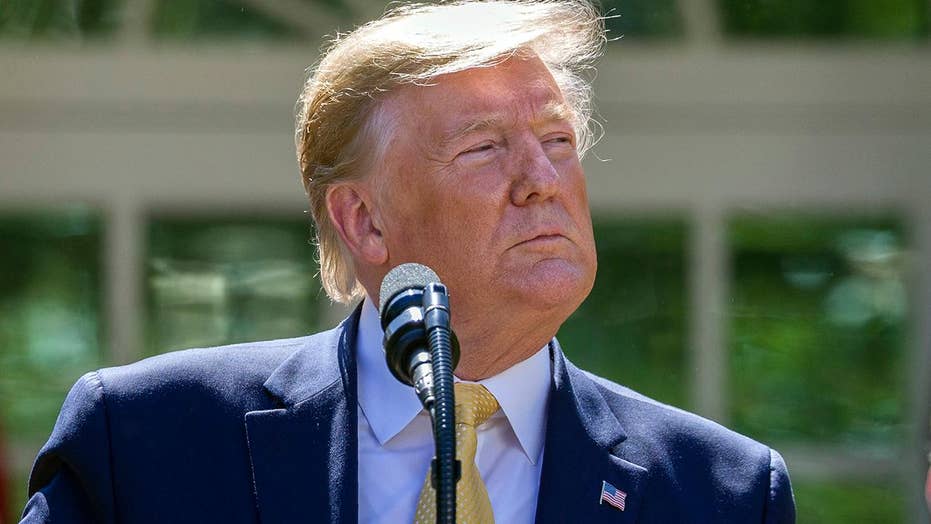 Where were the media when it came to Hillary Clinton's role in the Steele dossier? Fox News contributor Dan Bongino and Democratic strategist Jason Nichols debate.

A new vacancy on the Ninth Circuit Court of Appeals is giving President Trump a new opportunity to alter the DNA of the once-famously liberal court.

Judge Carlos Bea is intending to take a step back and claim senior status on the Ninth Circuit, opening up a spot for a new full-time active judge. One possibility for the position is Patrick Bumatay, currently a federal prosecutor in the Southern District of California.

Bumatay was nominated to the circuit court last year, but California Democratic Sens. Kamala Harris and Dianne Feinstein objected and the Senate did not take action. Trump then nominated Bumatay to the Southern District of California Court instead, but a similar lack of progress leaves him available for Bea's seat on the bench.

While it is traditional for a nominee's home-state senators to give their approval, it is not required, and Trump lately has bypassed the tradition in order to get conservative judges on the bench.

The sprawling Ninth Circuit -- which includes California, Arizona, Nevada, Oregon, Idaho, Montana, Alaska, Hawaii, Guam and the Northern Mariana Islands -- has long been a focus of Trump's. The president has railed against the court in the past for ruling against him in key cases. The court put Trump's travel ban on hold in a ruling that was then overturned by the Supreme Court, and also ruled against the administration's efforts to block California sanctuary laws.

In a "Fox & Friends" interview on Friday, Trump noted how he has specifically concentrated on nominating judges. Because Democrats led by Senate Minority Leader Chuck Schumer, D-N.Y., have stood in the way of his picks for positions like ambassadorships, Trump said, "Mitch McConnell, myself, and the Republicans have focused on judges."

That's not to say Democrats have not tried to block Trump's judicial picks. Aside from Bumatay's time in limbo, another Ninth Circuit nominee, Daniel Aaron Bress, continues to await confirmation after Democrats claimed he was wrong for the job because he did not have strong enough professional ties to California, where he is originally from. Bress' nomination has yet to move forward, following a May 22 Senate Judiciary Committee hearing.

Gayle Trotter, spokesperson for the Judicial Crisis Network, told Fox News that it is not about appointing "conservative" judges, but jurists who will be fair under the law.

"President Trump promised he would appoint fair men and women who were faithful to the Constitution -- including nominating such men and women to the Ninth Circuit -- and Democrats should stop obstructing his efforts to delivering on his promises," Trotter said.

Should Bumatay be nominated and get the job, he would be replacing another Republican-appointed judge, as Bea joined the Ninth Circuit after being nominated by President George W. Bush in 2003.

But Bea’s departure from his active role on the bench gives Trump yet another chance to put his mark on the court. Trump has already placed six judges there, bringing the total number of Republican-appointed judges to 11. Bress, if he is confirmed, would bring the number to an even dozen.

At the end of the Obama administration, there were 19 Democrat-appointed judges on the Ninth Circuit, compared with 16 now. There are two more vacancies yet to be filled.

The shifting makeup of the court could have bigger consequences soon.

A pending case before the court dealing with an injunction against construction of a border wall is being heard by a three-judge panel that includes two judges appointed by Republican presidents. The more judges Trump puts on the court, the greater the odds that such panels will include Republican picks in future cases.

As for Bumatay, Mike Davis, president of The Article 3 Project and former chief counsel for nominations to then-Senate Judiciary Chairman Chuck Grassley, R-Iowa, said he would “would make a phenomenal addition to the Ninth Circuit.”

According to the National Filipino American Lawyers Association (NFALA), Bumatay would be the first Filipino-American on a federal appellate court, and the second openly gay circuit court judge. In a statement, NFALA said they sent a letter to the White House encouraging President Trump to choose him.

“Patrick’s strong qualifications, including his breadth of experience as a federal prosecutor, a defense attorney, and a senior Department of Justice attorney make him ideal for the Ninth Circuit,” NFALA president Eric de los Santos said, adding that the organization believes Bumatay would serve “with excellence, fairness, integrity, and intellect.”

Fox News'  Gregg Re contributed to this report.