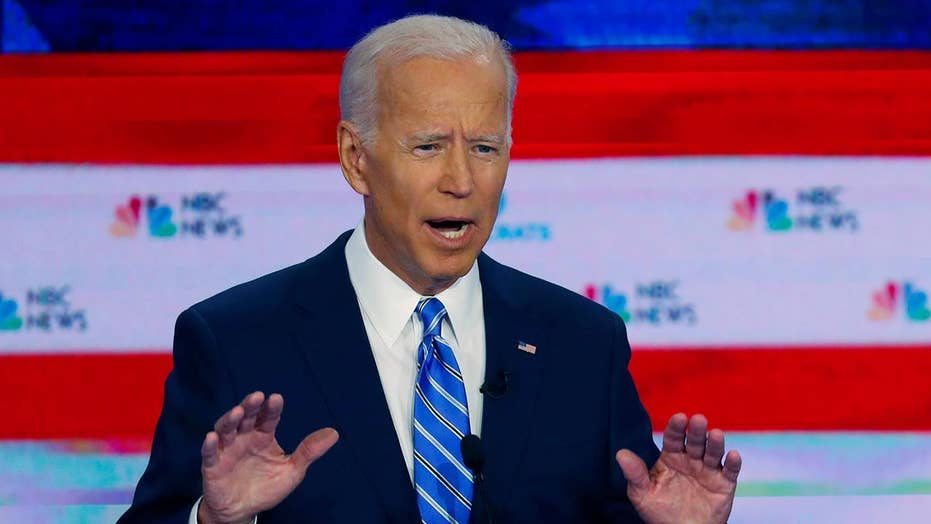 Democratic Vice President Joe Biden says he wasn't prepared to have to defend positions he held decades ago without time to go into context; Peter Doocy reports from Houston, Texas.

Former Vice President Joe Biden on Friday appeared to try and create some distance from the rest of the 2020 Democratic primary field as he ruled out packing the Supreme Court with more judges and made it clear that he is against decriminalizing border crossings.

“No, I’m not prepared to go on and try to pack the court, because we’ll live to rue that day,” the Democratic frontrunner told Iowa Starting Line.

A number of 2020 hopefuls have floated the idea of increasing the number of Supreme Court justices in response to a conservative dominance on the court, as well as long-standing grievances about how Obama-era nominee Merrick Garland was denied a hearing by the Republican-controlled Senate in 2016.

Several Democrats on the campaign trail, including former Rep. Beto O’Rourke, and Sens. Cory Booker, D-N.J., Elizabeth Warren, D-Mass., Kamala Harris, D-Calif., and Kirsten Gillibrand, D-N.Y., have signaled their openness to expanding the number of judges on the court if they enter the White House. Sen. Bernie Sanders, I-Vt., has opposed court packing but suggested rotating judges to other courts.

While court packing is an extreme idea, it is one of a number of once-fringe ideas that are now part of the 2020 conversation as Democrats select their candidate to face off against President Trump. Other ideas include health care for illegal immigrants, free college, reparations for slavery and an expansive "Green New Deal."

In the primary debate last week in Miami, candidates were asked about the question of illegal border crossings and if they supported making such crossings a civil offense. Most of the candidates on stage raised their hands, but Biden sought to clarify and gave an unclear answer.

In a Friday interview with CNN, he said more clearly that he does not support such a proposal.

“No I don’t. I think people should have to get line. But if people are coming because they're actually seeking asylum, they should have a chance to make their case,” he said.

In that interview, he also distanced himself from what he described as a “scrum” in the debate.

“Do you think the American public looked at that debate -- take me out of it -- and thought ‘Boy, I really like the way that’s being conducted. They’re really showing themselves to do really well’?” he asked. “Come on, man.”

But he said in the same interview he said he does support health care for illegal immigrants, as he had indicated in the debate a week earlier.

Although he is embracing, cautiously, a few of those ideas once seen only in the left-wing fringes of the party, he also said that the only way to win against President Trump is with a more mainstream approach, not by embracing the more radical stances of Democrats, such as those held by freshman Rep. Alexandria Ocasio-Cortez, D-N.Y.

"By the way, I think Ocasio-Cortez is a brilliant, bright woman, but she won a primary. In the general election fights, who won?” he asked. “Mainstream Democrats who are very progressive on social issues and very strong on education and health care."