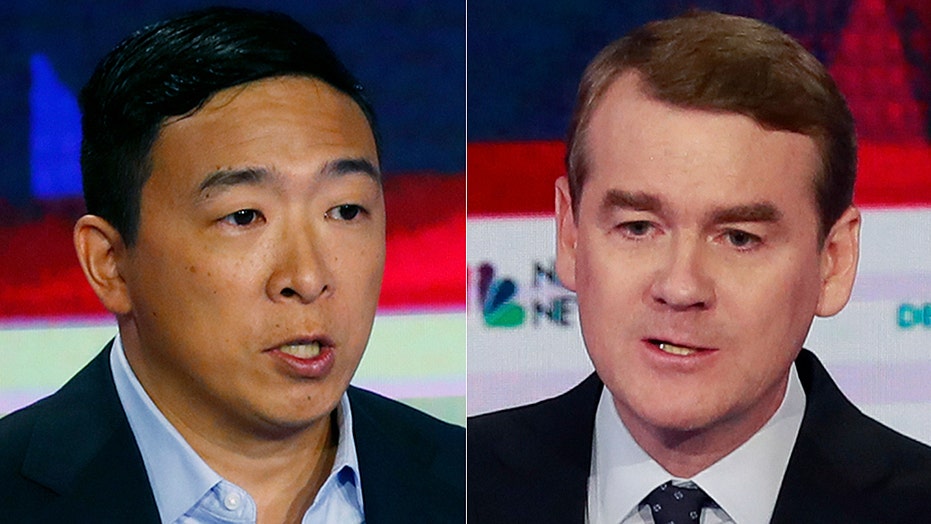 Businessman Andrew Yang and Sen. Michael Bennet, D-Colo., parodied Democratic feuds, tweeting memes and pledging to battle each other when they and other 2020 hopefuls face off during the second Democratic primary debate.

"I would like to signal to the press that I will be attacking Michael Bennet at next week’s debate. Sorry @MichaelBennet but you know what you did," Yang tweeted on Friday.

He and Bennet are just two of many who will join the second round of debates on July 31. That debate includes frontrunners -- Sen. Kamala Harris, D-Calif., and former Vice President Joe Biden -- who made headlines following a confrontation at the first primary debate.

While those two feuded over a serious topic, Yang and Bennet joked about grades and facing off like penguins -- likely a jab at media outlets' focus on party infighting.

One of Yang's tweets showed him as a penguin knocking another penguin, labeled as Bennet, on the head, causing him to fall into icy water.

While the exchange between the Democratic longshots was friendly in tone, Biden prepared to get tough with Harris in case that she challenges him again on race or other issues.

Biden reportedly sought a public speaking consultancy's help immediately after their first debate in July. On Wednesday, the frontrunner warned he "wouldn't be as polite this time." Biden also defended himself by pointing to the "significant background check" former President Obama did on him.

“I doubt he would have picked me if these accusations about my being wrong on civil rights is correct," Biden said.