Democratic presidential candidate Andrew Yang said Tuesday he has chosen another early voting state resident to pay $1,000 a month out of his own pocket, as part of his unconventional pitch for a “universal basic income” in the United States.

Yang said in a statement that he will pay Kyle Christensen, 41, of Iowa Falls, Iowa every month for one year, starting on July 1. The campaign said he is the second voter to receive $1,000 a month from Yang, after he chose a voter in New Hampshire earlier this year.

"We have plenty of resources in this country, but the benefits of living in the wealthiest and most advanced nation in the history of Earth are not being shared with most Americans,” Yang said in a statement. “We must build a new economy that puts people first. If there’s one policy that would transform American lives for the better on day one, it's the Freedom Dividend."

The New Hampshire recipients, the Fassi family from Goffstown, were selected out of a pool of dozens of Granite State applicants. They started receiving the monthly $1,000 payments in January.

Yang, an entrepreneur from New York, is proposing a “freedom dividend” of $1,000 a month for every American over the age of 18. 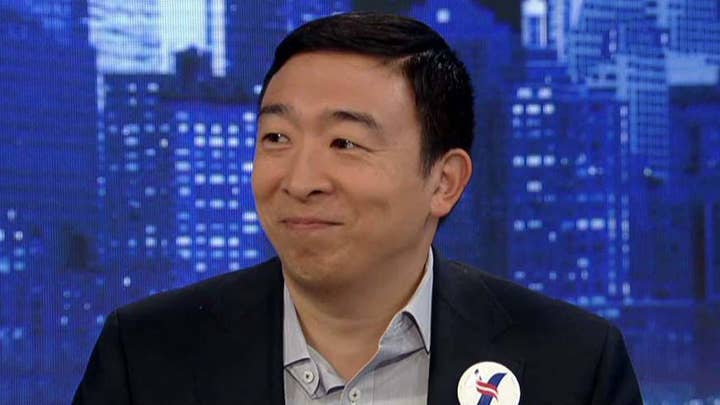 The plan, like Yang’s candidacy, is a longshot. But, thematically, it dovetails with such sweeping government aid ideas as those contained in the newly unveiled Green New Deal and other proposals on Capitol Hill.

Giving money to potential voters in two crucial early voting states could raise some eyebrows, legally speaking. But Yang said he checked with the Federal Election Commission before going ahead with his plan.

“I talked to the FEC and they said as long as it’s my personal funds, and it’s a personal gift with no strings attached, they have no issues,” he told Fox News earlier this year.

Yang told Fox News he’s “optimistic” the families receiving his personal cash payments this year “will come out for me, but I have no expectations and certainly no obligations.”

Experts at the Campaign Legal Center – a nonpartisan organization that works to reduce the influence of money in politics – told Fox News that the distribution of personal funds is not something that campaign finance laws cover.

They added that they didn’t believe what Yang was doing would be unlawful, since the money being given away came with no strings attached, and should not be considered a form of bribery.

Yang was the CEO of the test-prep education company Manhattan GMAT. In 2011, he launched Venture for America, a New York City-headquartered organization that trains entrepreneurs.