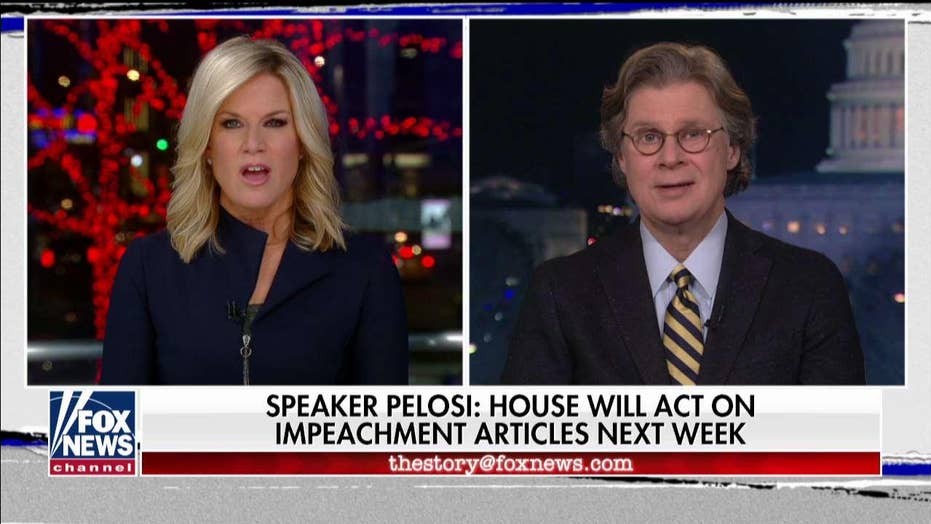 The timing of the Senate's likely impeachment trial of President Trump will not bode well for some 2020 Democrats' hopes of campaigning in Iowa and New Hampshire before those states' respective caucus and primary, according to Fox News contributor Byron York.

York said Friday on "The Story" that a handful of the Democratic presidential hopefuls are sitting U.S. Senators, who will have to be in Washington D.C. while their primary opponents are out in Des Moines and Concord.

Sens. Elizabeth Warren of Massachusetts, Michael Bennet of Colorado, Bernie Sanders of Vermont, Amy Klobuchar of Minnesota and Cory Booker of New Jersey will all be subject to a six-day-per-week trial, York said. Senate Majority Leader Mitch McConnell, R-Ky., has said he will make all senators work Saturdays as they adjudicate the articles yet to be forwarded by House Speaker Nancy Pelosi, D-Calif.

"This is a huge deal for some Democrats," he said. "If the trial does start next week, the Clinton trial took four or five or six weeks to finish. And if it takes that long ... that will go over the Iowa caucuses and the New Hampshire primary."

"Sanders and Warren are going to be sitting in the Senate."

York predicted that Pelosi will forward the articles sometime after Tuesday's Democratic debate in Iowa.

Trump himself poked fun at the Democrats' predicament Friday, sharing a clip of Sanders being interviewed by CBS "Late Show" host Stephen Colbert.

Sanders told the comedian he would be using a private jet to fly between the District of Columbia and the early primary states in order to fulfill both his senatorial and campaign obligations.

"Looks like Crazy Bernie will use a private jet to fly to early primary states during the hoax impeachment trial," Trump wrote on Facebook. "Is this the same Bernie Sanders who supports the Green New Deal? Hypocrite!"