Quarterback Drew Brees is under fire over his stance on kneeling during national anthem; reaction from former NFL star Burgess Owens.

An opinion piece published by NBC News claimed that NFL superstar Drew Brees' "biggest mistake" when defending the American flag was "believing" that it "means anything."

Brees unwittingly sparked a national firestorm when he defended the flag when asked during an interview about the kneeling protests that have taken place at football games over the years, insisting it was a sign of "disrespect."

However, amid the political climate following the death of George Floyd, Brees was widely condemned even by many NFL players. The star New Orleans Saints quarterback later apologized for his remarks.

"[Brees] has unfortunately become the poster child for what happens when you venerate a hollow space wrapped up in red, white and blue," writer Noah Berlatsky claimed. "Brees believed that his comments honored the flag and America's ideals. But valuing a symbol of justice over justice itself isn't moral or righteous. It's the opposite. When honoring the flag is the price of justice, then the flag does not symbolize justice. It symbolizes force, inequality and racism. It's a flag of conquest for white people, not of mercy or freedom for all."

Berlatsky then compared Brees' meaning of the American flag, which Brees said reminded him of his grandfathers who served in World War II, to 1852 remarks made by Frederick Douglass describing Independence Day, "the sunlight that brought light and healing to you, has brought stripes and death to me." 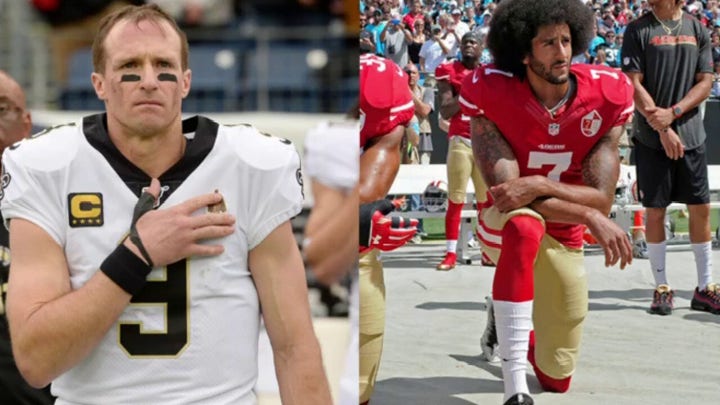 "Brees wants his interpretation of the flag honored; everyone, he insists, should put their hands on their hearts before the flag to show 'that we are all in this together.' But some people, like Douglass, or Floyd, or Kaepernick — banned from Brees’ league for his protest — are not equals in America," Berlatsky explained. "Brees will not stand in solidarity with them unless they first respect his symbols. You have to say the nation is righteous before the nation will consider whether to stop murdering you."

He continued, "There is no unity and solidarity centered on the flag, because the flag, and the nation, don't have any virtue. Only human beings can have that. [Kaepernick] asked his country to think about its own symbols, rather than blindly worshipping them. Brees, and white Americans in general, have not risen to this challenge. This nation must care more about its soul than its symbols. It's better to burn a flag than a person."