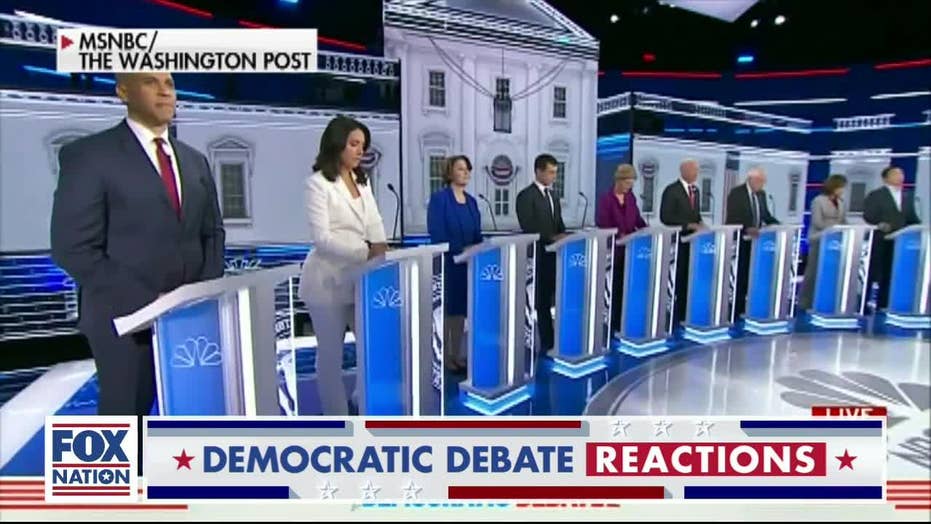 MSNBC’s presidential primary debate featuring the top 10 Democrats seeking the White House drew only 6.5 million viewers on Wednesday, making it the lowest-watched debate among total viewers of the 2020 election cycle, according to early Nielsen data.

“Having 6.5 million viewers tune into your broadcast is never anything to sneeze at, but it’s still far fewer than what previous debates hauled in,” TVNewser editor A.J. Katz wrote.

“Why the low ratings? Perhaps 11 hours of impeachment coverage wore politics junkies out. Perhaps people are becoming flat out tired of these debates. Could be a combination of both,” Katz added.

Fox News picked up 2.5 million viewers from 9 a.m.-4 p.m. ET earlier in the day for the fourth day of impeachment hearings. It’s the fourth-straight day that Fox News topped all cable and broadcast viewers for coverage of the hearings.

MSNBC finished second with 2.4 million viewers during the same time period, as CNN averaged 1.7 million to finish last among cable networks. None of the broadcast networks topped Fox News in total viewers, as CBS led the way with 1.7 million viewers followed by ABC’s 1.59 million and NBC’s 1.5 million.

The most-watched primary debate of all time was Fox News’ August 2015 GOP edition, which averaged a whopping 24 million viewers.

Prior to Wednesday’s debate, candidates Tom Steyer, Cory Booker, Kamala Harris, Bernie Sanders and Elizabeth Warren signed a letter urging the Democratic National Committee to hold NBC accountable for its “toxic culture” after a series of sexual-harassment scandals related to Harvey Weinstein and Matt Lauer -- but the issue was not addressed on the stage.

The Democrats’ next primary debate is scheduled for Dec. 19 from Loyola Marymount University in Los Angeles.