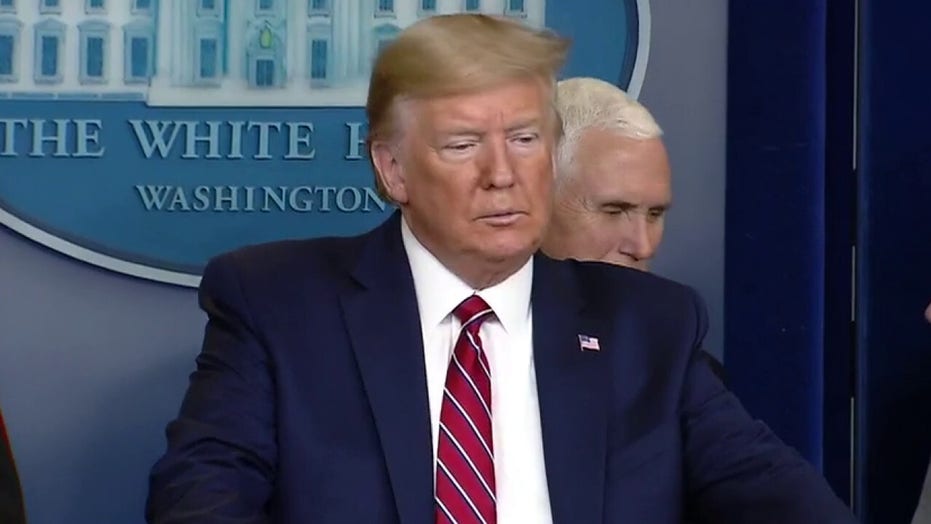 President Trump's message to America: 'There is tremendous hope'

'Our country has been incredible,' says President Trump addressing the American people over the coronavirus outbreak

Members of the White House press corps appeared to put Secretary of State Mike Pompeo in a tough situation on Friday when they asked him about the message President Trump sent by criticizing the U.S. media during the coronavirus briefing.

Their questions followed a tense exchange in which Trump criticized NBC reporter Peter Alexander and his network. Pompeo initially bypassed a question about whether Trump undermined his ability to do his job by calling news outlets untrustworthy.

PBS correspondent Yamiche Alcindor later followed up with another question: "Mr. Secretary, what message do you think it sends to other countries when you have the President of the United States lashing out at reporters?"

"I've had my frustration with reporters too," Pompeo responded. "All I ask when I talk to the media is that you listen to what we say and report it accurately. And it's frustrating. It's frustrating when you see that that doesn't happen, it's enormously frustrating."

After another question, Pompeo said that he's seen "many things at the State Department be reported wildly inaccurately on multiple occasions and I have spoken to those reporters about it each and every time — and I will continue to do so."

Trump, on Friday, invoked the Defense Production Act to get needed medical supplies to the front lines of the coronavirus outbreak and mobilize the private sector.

His administration also announced an effective closure of the U.S. border with Mexico, prohibiting most travel except for trade. That brings it in line with the restriction on the Canadian border earlier this week. The U.S. is also suspending interest on student loans to help young people cope with job losses and the financial crunch.

More than 200 people have died from COVID-19 in the U.S. and sickness from the disease is on the rise, with hospitals at risk of being overrun. Most people who get it have only mild or moderate symptoms, such as fever and cough. For some, especially older adults and people with existing health problems, it can cause more severe illness, including pneumonia.

The Associated Press conributed to this report.