A look at some of the biggest moments from Robert Mueller's testimony before House Intelligence Committee.

Liberal activist and filmmaker Michael Moore delivered a scathing review of Special Counsel Robert Mueller's testimony on Wednesday, suggesting Democrats should reconsider why they trusted him in the first place.

"I said it in 2017 and Mueller confirmed it today -- All you pundits and moderates and lame Dems who told the public to put their faith in the esteemed Robert Mueller -- just STFU from now on." 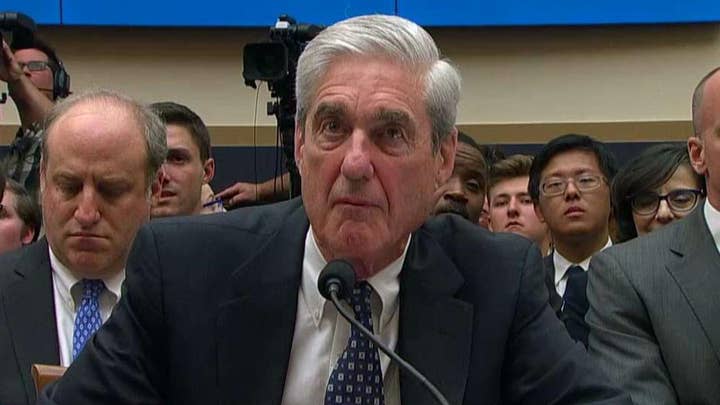 Moore was just one of many media figures to pan Mueller's performance and suggest it did not give Democrats enough to further any potential impeachment push.

While Democrats were hoping for a memorable hearing performance that might offer clear-cut testimony on crimes by the president, the result of hours of grueling testimony -- like the report itself -- was more ambiguous.

Mueller at times appeared flustered at the Judiciary Committee hearing, often asking lawmakers to repeat questions while referring back to the report or stating topics were outside his purview whenever questioners sought to drag him outside the bounds of his written findings.

"Trump must be gloating in ecstasy," Moore also tweeted. He claimed that although Mueller's report was a "damning document" for Trump, Wednesday's testimony provided a visual that helped the president.

MICHAEL MOORE WARNS DEMS AHEAD OF 2020: TRUMP 'HASN'T LOST' HIS 'INSANE BASE'

"Not because of the failure that is Robert Mueller — his Report is still a damning document of crimes by Trump—but because Trump understands the power of the visual, and he understands that the Dems aren’t street fighters and that’s why he’ll win," Moore tweeted.

Trump later tweeted in reply: "Even Michael Moore agrees that the Dems and Mueller blew it!"

Jeremy Bash, who served as an adviser during former President Obama's administration, similarly blasted Mueller's testimony as "boring" and called him "ineffective" in defending his work. "I fear that this hearing set back efforts to hold the president accountable," Bash said after Mueller's testimony on Wednesday.

Mueller faced a barrage of criticism Wednesday from House Republicans for his handling of the probe into any collusion between Russia and President Trump. He did not reach a conclusion in the report that Trump was guilty of anything but did not exonerate the president, either.