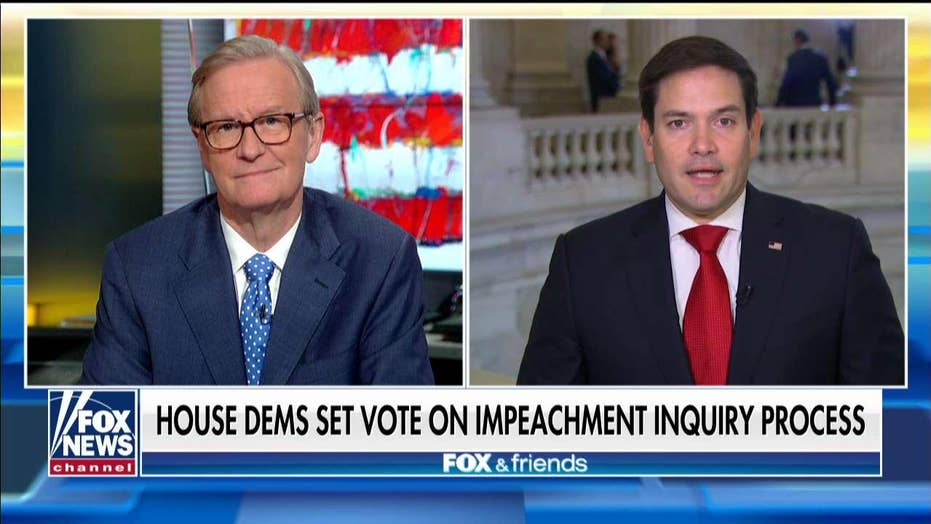 Florida Sen. Marco Rubio says America wants their lawmakers to be working on issues like the economy and health care instead of impeachment.

Florida Senator Marco Rubio said Tuesday House Democrats have lost credibility with their impeachment charge, since many have wanted to take such an action since President Trump's election.

Appearing on "Fox & Friends" with host Steve Doocy, Rubio said that Americans should not forget the gravity of an impeachment.

"Impeachment is really a big deal, like removing the President of the United States is not just an extraordinary measure — it's also really bad for the country, it's traumatic," said Rubio.

House Speaker Nancy Pelosi said Monday the House will vote this week on a resolution to formalize -–and establish the parameters – of the Trump impeachment inquiry. Fox News has learned the vote will take place Thursday on the House floor.

Republicans, who have been calling for a vote for weeks now, hit back Monday at Pelosi over the planned vote.

NEWT GINGRICH: HOW SEN. LINDSEY GRAHAM BOXED PELOSI IN ON IMPEACHMENT AND WHAT COMES NEXT

South Carolina Sen. Lindsey Graham – the chairman of the Senate Judiciary Committee, which would play a role in a Senate impeachment trial – said, “A vote now is a bit like unringing a bell as House Democrats have selectively leaked information in order to damage President Trump for weeks."

Rubio noted that there are a "significant number of the House [members]" that have been looking for a reason to impeach Trump since he took office.

"So, you'll start to lose some credibility when you make up your mind about this back in ... 2016 because you didn't like the results of the election," he told Doocy.

He added that no Democrats who were elected in districts that "Trump won" were sent to Congress to impeach the president.

"They sent them here to deal with drug prices, to deal with China, to help our economy continue to grow, to defund our military — where they won't even pass an appropriations bill that we need to get done which is really important for [the] long-term plan," said Rubio.

"Very few people, unless you come from the most radical fringes of the American political system, were sent up here to spend all of their time – every single day – focused on the issue. They're going to do what they're going to do. I can't control what the House does. But, we're going to continue to do our jobs, or at least try to here in the Senate," he said.