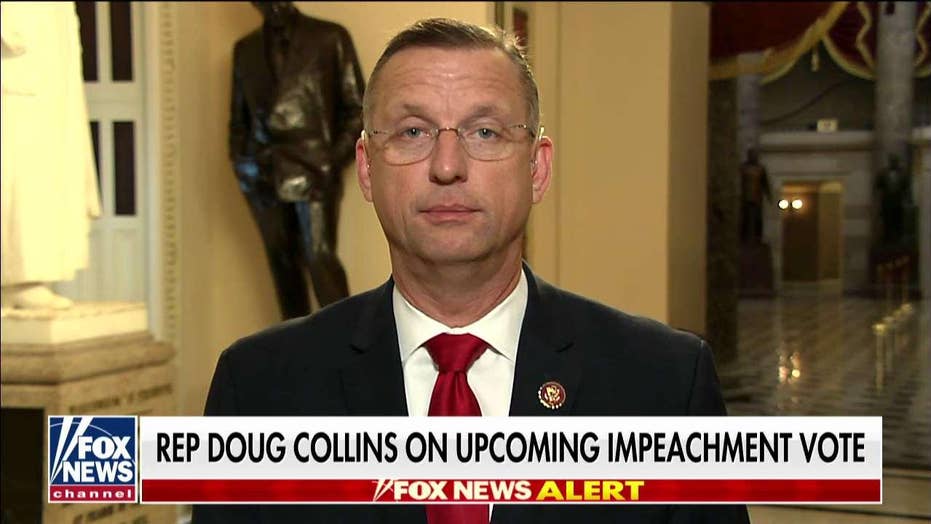 House Democrats' impeachment vote is nothing but a "sham," Rep. Doug Collins, R-Ga., said on Tuesday.

On Monday, House Speaker Nancy Pelosi announced the vote on a resolution to formalize -- and establish the parameters -- of the Trump impeachment inquiry. It is not an actual article of impeachment, but rather a resolution that sets the ground rules for the process. Fox News has learned the vote will take place Thursday on the House floor.

Appearing on "America's Newsroom" with host Sandra Smith, Collins, a ranking member of the House Judiciary Committee, said Congress should be focusing on "doing the people's business."

"We've been telling them it [was] wrong. We gave them plenty of notice that [it] was wrong and not fair to the American people or fair to the president," said Collins.

He noted that Republicans hadn't even seen the text of the resolution yet because they "had to write it all out last night."

"That shows you how desperate they are," he added.

Collins said Democrats are using the vote as "something to simply cover [the] problems that they've had with this investigation all along."

NEWT GINGRICH: PELOSI ANNOUNCES TRUMP IMPEACHMENT INQUIRY VOTE -- HERE'S WHAT I AM ON THE LOOKOUT FOR NOW

"We'll see the Republicans vote against this," predicted Collins. "Because, again, you can't fix what the craziness that they've done over the past three or four weeks to slam this president and do what they have been doing and now try to make it better."

"They tried to have public hearings. There was nothing there; Mueller showed that. They made all kinds of statements about the president that we proved to be false," he told Smith.

He added that while he has a "problem" with the way this is being handled, it seems "they've caved in."

"So, this is really a disservice to the American people, and Speaker Pelosi is admitting that they've been doing it wrong," Collins concluded.