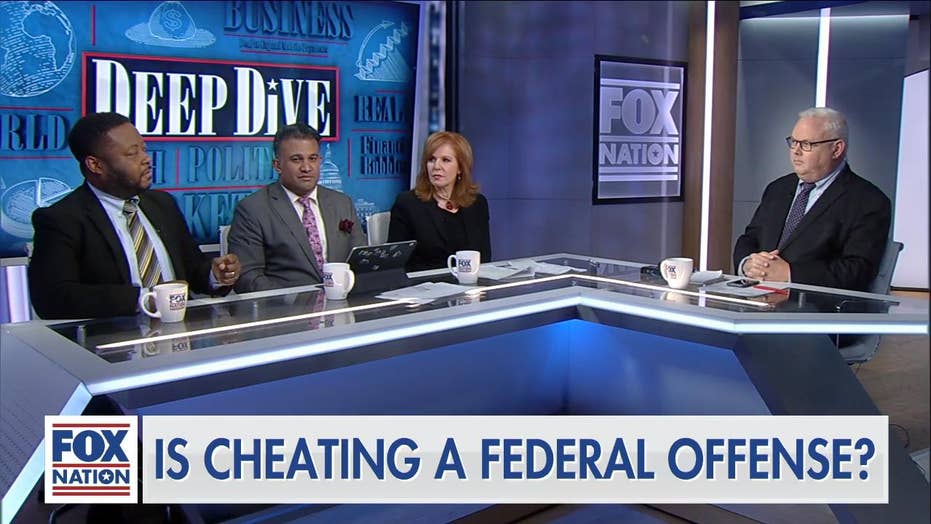 "Free Lori Loughlin," wrote Wall Street Journal editorial board member Bill McGurn in an opinion piece published Monday, and in the latest episode of Fox Nation's "Deep Dive," McGurn and a panel of experts hashed out that argument.

Last week, actress Lori Loughlin and her husband, fashion designer Mossimo Giannulli pleaded not guilty to new charges brought against them in the college admissions scandal.

"Federal dollars are at stake," replied attorney and political strategist Robert Patillo."These people are trying to benefit from the federal money that's going to be going to USC."

McGurn also took issue with the fact that Loughlin faces a potential sentence of 45 years in prison.

Fox Business Network anchor Liz Claman agreed with McGurn that the maximum sentence seems excessive, but Claman, whose daughter is currently applying for college, said that Loughlin should be locked up.

"In my opinion, she absolutely must serve time," she said. "If you don't have her spend time in prison as a deterrent for others who'd pull off this behavior, you are saying 'It is OK to participate in bribery, fraud, falsifying documents' ... These are breaking law issues that people serve time for."

DEMOCRATS RAMP UP CALLS FOR FACEBOOK TO 'POLICE' POLITICAL ADS: WHAT'S REALLY BEHIND THIS?

"I'm not so sure that for a first-time nonviolent offender not to serve jail time means there's no other punishments or that you're incentivizing people to do this," questioned McGurn.

"So was Bernie Madoff," said Claman, suggesting to the panel that first-time nonviolent offenders can be deserving of punishment.

"I think the reason this got so much attention compared to other cases involving college admission is this is exactly what we all thought happened," concluded Patillo. "I'm from rural Georgia, grew up in a double-wide trailer, and when you're putting your application in there with all the extracurricular activities, reading at old-folks homes, participating in sports, marching band, great scores on the S.A.T., great GPA and to know that Aunt Becky from 'Full House' can pay somebody money to pretend ... both daughters are on the crew team.  That's how we all thought the system worked."