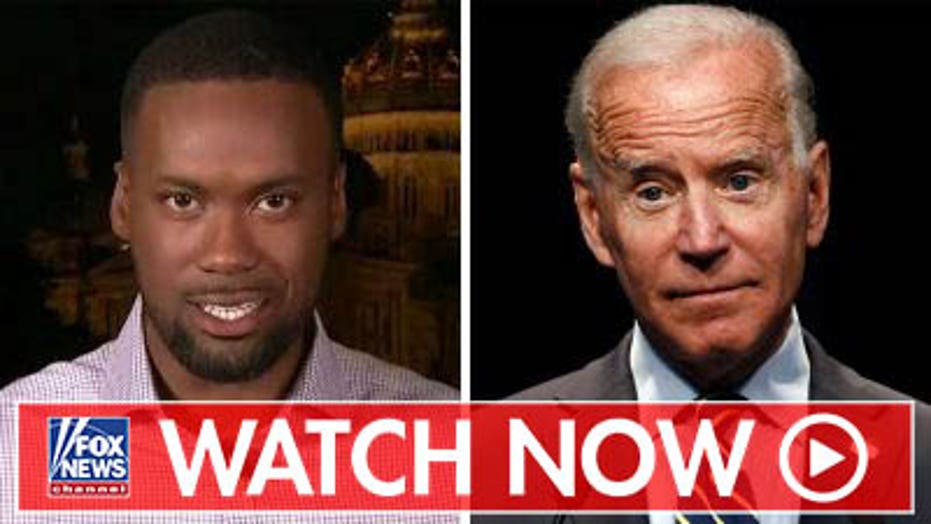 Many Democratic voters in Iowa and across the country are supporting former Vice President Joe Biden's 2020 run for the presidency because they see him as the best candidate to defeat President Trump, according to Lawrence Jones.

But recent interviews with some of those voters suggested their support for Biden was less than fully enthusiastic, Jones said Wednesday on "Hannity."

"They weren't enthused to go out and vote for him. A lot of the people were undecided," Jones told host Sean Hannity. "A lot of people are holding their nose to vote for him because they think he's the best candidate to beat Donald Trump.

"Democrats have this issue right now," Jones continued. "Either they get crazy progressives -- which they know the electorate aren't going to vote for in the general election -- or they settle for Sleepy Joe and I just don't think he has the stamina for a presidential race against Donald Trump."

"Democrats have this issue right now: Either they get crazy progressives -- which they know the electorate aren't going to vote for in the general election -- or they settle for Sleepy Joe."

Indicative of apathy toward Biden: Attendance at one of his recent campaign events in Iowa appeared to be less than 100 people, Jones said.

There were "probably about 75 people at the first event," Jones said of the Delaware Democrat's appearances in Ankeny.

Prior to joining host Sean Hannity, Jones spoke with several Iowa Democratic voters to get their views about Biden.

On the street in Iowa, Jones asked one woman if Biden is progressive enough.

A man told Jones he was expecting "another canned political speech" from Biden that day.

Another woman expressed hope the former U.S. senator has the "stamina" to carry on through the 2020 elections and defeat the incumbent president.