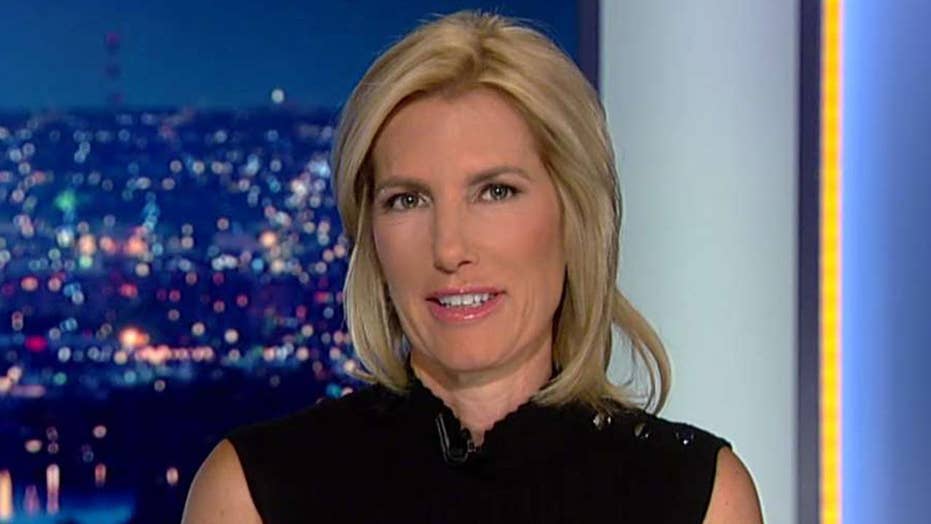 Laura Ingraham said Tuesday in her opening monologue that Democrats and their media allies now remind her of cartoon characters, as they repeatedly predict President Trump's "political demise."

“I feel like I’m watching characters in a cartoon series instead of representatives of the people. Month after month, they’re goofy, they just boldly predict President Trump’s political demise. They give Americans the impression that they have him trapped, that he’s headed off the edge of the cliff," she said, calling it an "animated series of failures."

Ingraham then laid out five ways that she believes Trump has "outsmarted them all," beginning with the country's booming economy, as liberals consistently "trash" his economic record and predict a recession.

Beyond the economy, Ingraham said critics have consistently predicted that Republicans would break with Trump, yet he enjoys 90 percent approval within his own party. Third, she said Democrats and the media have repeatedly claimed China tariffs would "tank the economy."

"Do they get up in the morning and just pick a few keywords that they're gonna share all day long?" she asked.

Over the summer, Ingraham said Democrats falsely believed that Trump's "war of words" with members of the so-called "Squad" would result in "political pain." Instead, she said it gave Reps. Alexandria Ocasio-Cortez, Rashida Tlaib, Ilhan Omar, and Ayanna Pressley more prominence within the party and their "impeachment fantasy became a daily reality."

Despite the new effort to oust Trump, polls now appear to be shifting in favor of Trump, specifically with independent voters, Ingraham noted.

Fifty percent of independents questioned in an NPR/PBS/Marist poll conducted Nov. 11-15 did not support impeaching and removing Trump from office, with just 42 percent backing such a move. That’s a noticeable dip in support compared with the previous NPR/PBS/Marist poll – conducted the first week in October – when support stood at 45 percent.

And, a Gallup poll conducted the first two weeks of November indicated that 45 percent of independent voters supported impeaching and removing the president – with 53 percent opposing the move. That’s a switch from October, when the previous Gallup survey put the split at 53-44 percent.

"If the speaker doesn't watch out, her new nickname will be Wile E. Pelosi. ... No matter what the Democrats throw at Trump, they just can't take him down, it's driving them crazy. Their predictions about the president's staying power have been spectacular flops," said Ingraham