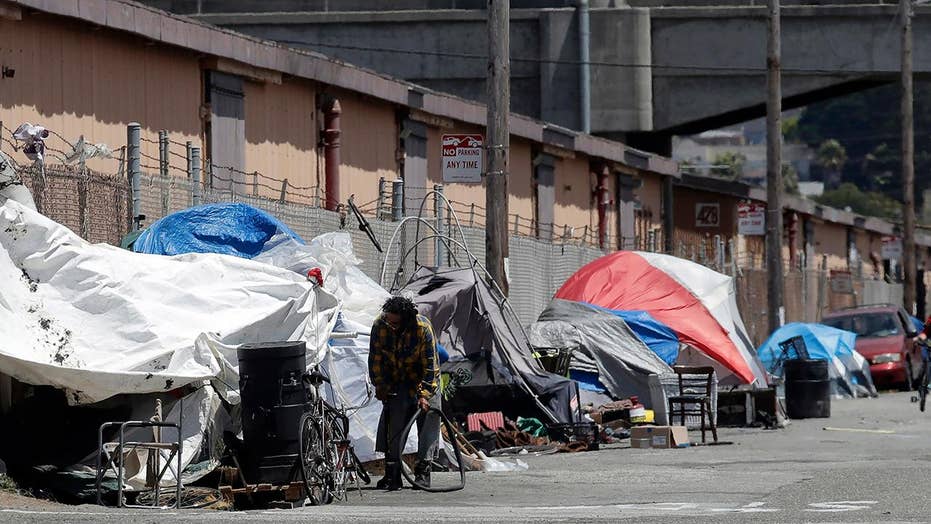 Instead of cracking down on public urination and public camping, the city will focus on fighting social injustice; reaction on 'The Five.'

"Do you remember the Tea Party?" Watters asked his co-hosts on "The Five" on Tuesday. "San Francisco needs to start the 'Pee Party.' OK. And this is what they need to do every day when the D.A. walks into his office there needs to be a bunch of patriots just peeing on the sidewalk in front of him until he's forced to arrest them."

Watters' co-hosts giggled as he touted his plan and compared the hypothetical urination protesters to Samuel Adams. Co-host Dana Perino voiced her support for the 'Pee Party' while co-host Juan Williams said the comments "shut me up."

Newly elected D.A. Chesa Boudin has promised not to prosecute public urination and other quality-of-life crimes that have plagued the Bay Area amid a crippling homelessness crisis affecting urban communities across California.

In response to an American Civil Liberties Union questionnaire reported by The San Francisco Chronicle last month, Boudin said such crimes should not be prosecuted.

The son of parents who were members of the radical left-wing Weather Underground, Boudin grew up with his parents incarcerated for their roles in an armed robbery that left three men dead.

Watters suggested that Boudin wants to rebuild San Francisco as a "socialist utopia."

"The D.A. really hates this city. He is there to destroy this city. His parents were domestic terrorists. They got locked up. Then he was raised by domestic terrorists," Watters said. "It makes perfect sense and now his job is to destroy an American city. He's a socialist. He wants to run everybody out of San Francisco and rebuild it as a socialist utopia. That's what's going on here."