Andrew Ansbro, president of the FDNY Uniformed Firefighters Association, spoke out against New York City Mayor Eric Adams’ recent changes to the vaccine mandate, calling it a double standard that more of the city is reopening while first responders face termination for not being vaccinated.

Ansbro's comments on ‘Fox & Friends’ Monday come on the heels of Mayor Adams recently announcing his decision to lift the vaccine mandate for athletes and performers in an attempt to "move this city forward."

At the same time, as many as 500 firefighters are at risk of losing their jobs because of their vaccination status. Another 1,400 have already been fired.

A demonstrator holds a sign during a protest by New York City Fire Department union members, municipal workers and others, against the city's COVID-19 vaccine mandates on Manhattan's Upper East Side, in New York City, Oct. 28, 2021. (REUTERS/Mike Segar/File Photo)

"For the last two years, we’ve been through the entire pandemic, every single wave of it," Ansbro told co-host Ainsley Earhardt Monday. "We’ve borne the brunt of it, as have all the essential workers in New York City."

FDNY UNIONS CALL FOR MAYOR ERIC ADAMS TO LIFT VACCINE MANDATES FOR CITY WORKERS: ‘ONE RULE FOR ALL’

He is, however, glad to see New York City make progress towards reopening.

"But you can’t have it reopened for some and put others on the unemployment line at the same time." 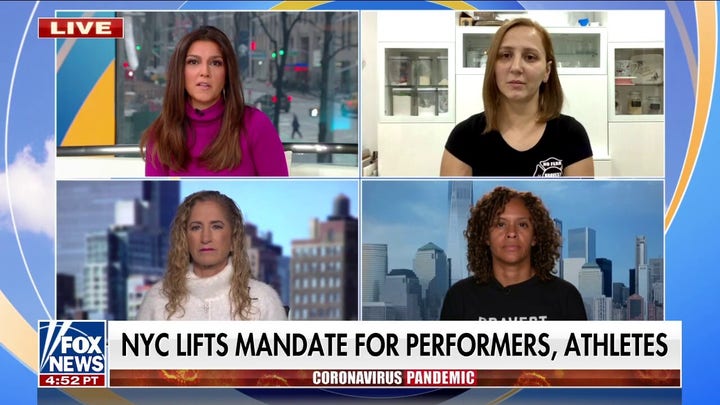 In his announcement, Mayor Adams said that he won’t consider rehiring city employees that have already been fired over their vaccination status.

Ansbro pushed back, saying he will continue to pressure Adams until the mandate is changed.

"I want someone to talk to his doctors that said it’s OK for athletes and performers to go back to work, and, at the same time, fire employees – fire their essential workers and fire teachers and everyone else who works for the city."

KYRIE IRVING: PEOPLE DEALING WITH ‘REAL CONSEQUENCES’ FROM BEING UNVACCINATED

Ansbro said most of his coworkers have contracted COVID-19 and now have some level of natural immunity.

"Two years ago, all they talked about was natural immunity – ‘Can’t wait until we get to that point.’’

"That point has passed," he said. "It’s time to put this behind us."