Lithuania Foreign Minister Gabrielius Landsbergis spoke to Fox News Digital about his country's role in Ukraine and tensions between Lithuania and China.

UNITED NATIONS, New York – Lithuania’s foreign minister spoke about the importance of countering influence from Russia and China last week at the United Nations, calling on industrial nations to step up in supporting Ukrainians against the Russian invasion and warning of Chinese "coercion" around the world.

Lithuania's president, Gitanas Nauseda, had said that Russia’s war in Ukraine was "unjustified, unprovoked and illegal" and a "gross violation of international law" during his address to the United Nations General Assembly last week, but Foreign Minister Gabrielius Landsbergis emphasized that the country was not worried about Russian ramifications for the comments.

"The whole U.N. General Assembly was at least partially devoted to Russia's unjustified and illegal war in Ukraine. So, if Russia wanted to retaliate, it would have to choose a lot of enemies and a lot of targets just for the words," Landsbergis said in an interview with Fox News Digital.

THE UNITED NATIONS: IS IT WORTH ALL THE MONEY?

Lithuania was one of many countries that spoke out against Russia’s aggression during the global event, including President Biden and Japanese Prime Minister Kishida Fumio, who both called out Russia for violating the U.N. charter in its attack against Ukraine.

The threat of a nuclear disaster or use of nuclear force by Russia has loomed over the war in Ukraine, with Russian President Vladimir Putin saying last week that his country would use "all the means at our disposal" and the threat to resort to nuclear weapons is "not a bluff."

PUTIN WARNS WEST: THREAT TO RESORT TO NUCLEAR WEAPONS ‘NOT A BLUFF’

Given the gravity of the Russian threat, Landsbergis called on NATO to be "very clear about the possibility of response in case … nuclear weapons are being used."

"It does not necessarily have to be a nuclear response. But I think that we possess a number of possible responses that would not escalate the conflict further but yet … give a very clear answer," he said.

But even without the use of nuclear weapons, Russia has the capability to create a nuclear disaster in Eastern Europe.

"We have to remember that Vladimir Putin already possesses a nuclear power plant in the occupied territory in Ukraine, which can be used as a weapon. So, it also is a worry for … many neighbors close to Ukraine, for many countries too close to Ukraine," he said.

Russian forces captured the Zaporizhzhia nuclear plant in Ukraine earlier this year, and the site remains near the front lines of the conflict, raising safety concerns over the potential for nuclear disaster.

While much of the United Nations General Assembly focused on Russia’s invasion of Ukraine, climate change remained a significant topic, and Landsbergis said the world could not "afford to lose sight of either."

"Unfortunately, this is sometimes how crises work. They do come in waves," he said, adding that COVID had been a third, simultaneous crisis.

Landsbergis also warned of the "vast array of coercion instruments" China is willing to use against countries around the world.

In 2021, Lithuania became the first state to withdraw from the Cooperation between China and Central and Eastern European Countries initiative, led by Beijing. The country also made the decision to allow Taiwan to open a representative office in the Lithuanian capital of Vilnius. In retaliation, China enacted a series of economic embargoes and sanctions against Lithuania. 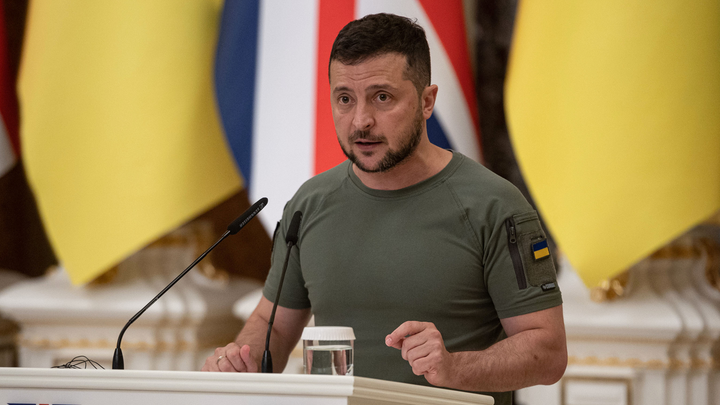 "What happened to Lithuania can happen in any country, Europe, Indo-Pacific, wherever," Landsbergis warned. "And I think we learned this lesson well; not just Lithuania, but everybody else, I think, should take heed of this and be better prepared."

Lithuania’s actions, Landsbergis said, were not about standing up to China but rather standing up for "principles."

The same principles, he said, that have resulted in Lithuania standing up for democracy and territorial integrity around the world, including Ukraine and Taiwan.