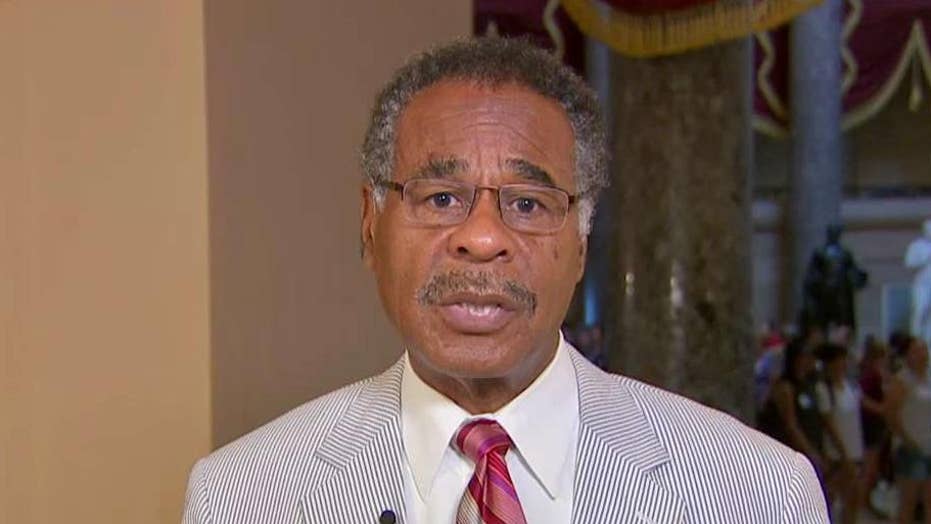 Missouri Democrat Rep. Emanuel Cleaver says the goal was to get through the resolution to condemn President Trump's tweets without more hostilities.

The Democrat who dramatically left his seat during a chaotic speech on Capitol Hill on Tuesday has explained why he made the unprecedented move.

Rep. Emanuel Cleaver, D-Mo., chastized both Republicans and Democrats for their partisan squabbling and abandoned his seat during a speech on Capitol Hill Tuesday because he was fed up with the escalating partisan attacks on both sides.

"I was frustrated. If you look at the footage, I had admonished both sides during this process. My goal was to get through this ... without adding any more hostilities," he said Wednesday on "Your World with Neil Cavuto."

"We were about five minutes through the whole process of the resolution condemning the president when a guy who's generally a very good guy, Congressman Collins, moved to take down the words of the speaker. Now the reason that became troubling to me is there was a point earlier where if I were to be an unfair person, I would have given a Congresswoman ... the same opportunity to take down the words of a Republican who had also violated the rules.

"Almost everybody who came up to speak violated the rules. I then allowed it to go along because I thought, okay, we're not going to start a fight in here and lo and behold -- fight ... I decided for my own mental health, I needed to get out of the chair."

Cleaver said he wanted to remind his colleagues of their lack of civility towards one another and was trying to find a way out of the "hostility" gripping the entire chamber.

"In some ways what I did, reminded a lot of the people, good and decent people on both sides of the aisle, who said, I didn't come here to fight," he said.

"Now, to be fair and to be sure, there are people who want to fight. And I've had some of them say, my constituents want me to come up here and fight.  And I don't think those people are going to change no matter what. But there are some other people I think, given the opportunity, would like to back away from all this hostility."

Host Neil Cavuto asked Cleaver if he had a chance to sit down with House Speaker Nancy Pelosi D-Calif, and he said he was able to speak with her and Republicans as well.

"I did. I went to both sides. I went over, talked to the Republicans right after I stepped down and then I spoke to Nancy Pelosi when she returned," he replied. "She wasn't in the chamber when that happened. But when she returned, I came back. Look, let's be clear, Nancy Pelosi violated the House rules. There's no question about it. As did almost everybody else who spoke. But I was able to keep that from becoming riotous. So she and I had a conversation. She said yeah, I've violated the rules and I want you to go ahead and go through the process. And I said I couldn't do it."

Cavuto also asked Cleaver if he thought Trump should be considered a racist, and he said he refrains from calling people racists because it rapidly ends the conversation, and puts up barriers that are almost impossible to bring down. He then asked what the country has to gain from being so divided.

"As I said on your show before, I don't call people racists even if I believe in my heart that they are," Cleaver added.

"Because once you do that, the dialogue is over. And so I'm not going to do that. What I will tell you is that the president does have a long and deep history of making racially insensitive comments. And there are a lot of people who would measure those things and say, well if he's doing it as much as we have him on record doing, then there's obviously is some racism there.

"I choose not to do it, and I didn't do it yesterday and I'm not going to do it today. I think the president is doing enormous damage, however, to this whole country. We're being torn apart and the question is, for what."