Speaker of the House Nancy Pelosi's remarks on the House floor draw a response from Rep. Doug Collins.

The Democrat-controlled House of Representatives passed a resolution Tuesday evening condemning President Trump's "racist" remarks this weekend -- although the moment was largely overshadowed by a dramatic floor fight earlier in the day that ended with House Speaker Nancy Pelosi ruled out of order for a breach of decorum.

The unexpected mayhem in Congress, which briefly resulted in the revocation of Pelosi's speaking privileges on the House floor, left commentators and lawmakers stunned. "So, Democrats vote to break House rules and decorum, so that they can call Trump out on decorum. Surreal," wrote Wall Street Journal columnist Kimberley Strassel.

The final resolution, entitled "H. Res. 489 — Condemning President Trump’s racist comments directed at Members of Congress," passed by a vote of 240-187. All Democrats voted yea, with a handful of Republicans joining them: Reps. Brian Fitzpatrick, Will Hurd, Fred Upton and Susan Brooks.

Michigan Rep. Justin Amash, who recently left the Republican Party after calling for Trump's impeachment, also voted yes. The rest of the Republicans voted no.

Trump had tweeted on Sunday that unnamed "Democrat Congresswomen" should go back and fix the "corrupt" and "crime infested places" from which they came and then "come back and show us how it's done." He later all but affirmed he was referring to Reps. Alexandria Ocasio-Cortez, Ilhan Omar, Rashida Tlaib, and Ayanna Pressley -- all of whom, except Omar, were born in the United States.

But, what Democrat leaders envisioned as a moment of Democrat unity turned out to be a striking display of disarray. As Pelosi spoke in favor of the resolution on the floor, she used frank and unsparing terms about Trump's comments -- and soon became the story herself. 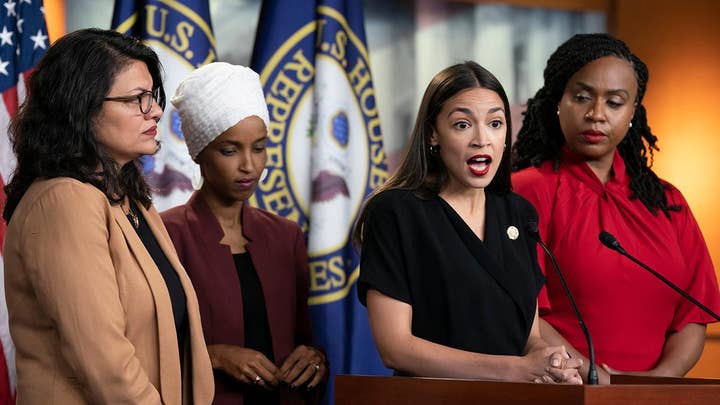 "There is no place anywhere for the president's words, which are not only divisive, but dangerous -- and have legitimized and increased fear and hatred of new Americans and people of color," Pelosi, D-Calif., said. "It's so sad because you would think that there would be a given that we would universally, in this body, just say, 'Of course. Of course.'"

Pelosi continued, her voice rising: "There's no excuse for any response to those words but a swift and strong unified condemnation. Every single member of this institution, Democratic and Republican, should join us in condemning the president's racist tweets. To do anything less would be a shocking rejection of our values, and a shameful abdication of our oath of office to protect the American people. I urge a unanimous vote, and yield back the balance of my time."

Georgia Republican Rep. Doug Collins rose to challenge her and demand that her words be "taken down." The extraordinary rebuke was the first of its kind involving a member of Congress and a speaker of the House in decades.

Collins immediately stood and asked if Pelosi wanted to "rephrase that comment."

"I have cleared my remarks with the parliamentarian before I read them," Pelosi claimed, before walking away to applause.

"Can I ask the words be taken down? I make a point of order that the gentlewoman's words are unparliamentary and be taken down," Collins said.

Trump says the issue is not about him, but rather what Reps. Alexandria Ocasio-Cortez, Rashida Tlaib, Ayana Pressley and Ilhan Omar say and do; chief White House correspondent John Roberts reports.

Fox News is told Collins used House Rule XVII, Clause 1(B). That rule requires that remarks on the floor “be confined to the question under debate, avoiding personality."

"The chair will remind all members, please, please, do not make personality-based comments," the chair, Rep. Emanuel Cleaver, D-Mo., responded.

Collins then repeated his request to strike Pelosi's comments. For more than 30 minutes after Collins' objection, House members were huddled with the parliamentarian, Thomas J. Wickham Jr., to determine next steps.

As the consultation dragged on, Pelosi then appeared to leave the House floor, which itself constituted a violation of House Rules when someone’s words were taken down. Members are supposed to be seated on the floor when a member’s words are stricken.

The scene then became even more bizarre when Cleaver told representatives after the lengthy huddle that he was trying to make a fair ruling as to whether Pelosi had broken House rules governing decorum, but people weren’t cooperating. Cleaver explained to Fox News he felt Pelosi was being singled out.

Cleaver simply declared, "I abandon the chair," and left -- a moment with no apparent precedent in modern congressional history. North Carolina Rep. G.K. Butterfield, also a Democrat, assumed the chair, before Hoyer took the reins.

Hoyer eventually assumed the chair upon Pelosi's request so that a Democrat leader, and not a rank-and-file member, could take control. Hoyer eventually read the parliamentarian's ruling that, based on the precedent "of May 15, 1984," Pelosi’s language did not meet the standard.

"The words used by the gentlewoman from California contained an accusation of racist behavior on the part of the President,” Hoyer said, affirming the House parliamentarian's decision and technically banning Pelosi from speaking on the House floor for the rest of the day.

“The words should not be used in debate," Hoyer said.

Democrats, including Hoyer, quickly voted along party lines to restore Pelosi's speaking privileges and keep her comments on the record, effectively overruling the parliamentarian.

The 1984 precedent came after Republican Newt Gingrich, then a Georgia congressman, sparred with then-House Speaker Tip O’Neill, a Massachusetts Democrat. O'Neill remarked: "My personal opinion is this: You deliberately stood in that well before an empty House and challenged these people, and you challenged their Americanism, and it is the lowest thing I have ever seen in my thirty-two years in Congress."

The parliamentarian determined at the time that the speaker’s use of the word "lowest" amounted to inappropriate language, and O'Neill's words were taken down.

Collins, in a statement late Tuesday, condemned Democrats for effectively reversing the ruling. 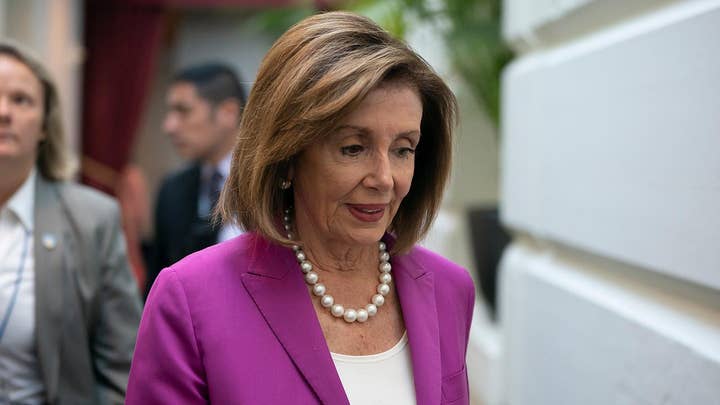 "Democrats admitted her words violated the rules of decorum, the very rules that ensure democracy’s every voice can be heard as we carry out the people’s business," Collins said. "Still, every Democrat lawmaker voted against striking her words from the record. It bears repeating the House prizes decorum because it is a symptom of and a catalyst for a healthy, confident democracy. I hope we recover that confidence soon and more forward with respect for the American people who sent elected officials, including the president, to represent them in Washington.”

But, Democrats privately told Fox News that rules of the House technically have been broken all the time, and that Republicans just wanted to distract from Trump's remarks.

Among other volumes, the House has used Thomas Jefferson’s "Manual of Parliamentary Practice" as a touchstone for House operations even today. Jefferson’s manual stated that House members cannot use language on the floor "which is personally offensive to the President." The manual also said members cannot accuse the president of "having made a bigoted or racist statement."

The House additionally has relied on Cannon’s Book of Precedents, authored by the late Missouri Rep. Clarence Cannon, a Democrat. Cannon’s book says that "personal criticism, innuendo, ridicule and terms of opprobrium" are out of the order in the House.

South Carolina GOP Sen. Lindsey Graham told "Fox & Friends" that the progressive representatives were a "bunch of communists," and charged that Omar was plainly anti-Semitic. Just over a dozen GOP lawmakers have condemned Trump's comments.

Omar previously has been criticized by prominent members of both parties for making remarks widely deemed anti-Semitic. This past March, the Democrat-led House overwhelmingly passed a bipartisan resolution that indirectly condemned Omar's repeated "anti-Semitic" and "pernicious" comments, including some in which she suggested Jewish politicians in the U.S. were bought and paid for.

The final House resolution, after days of Democrat infighting, did not actually mention Omar by name, and instead condemned bigotry of "all kinds."

Omar has also referred to 9/11 as a day when "some people did something," rankling Trump and top Republicans, who called the remarks clearly insensitive.

Some Republicans have condemned the president's remarks, including Sen. Lisa Murkowski, R-Alaska, who tweeted: "There is no excuse for the president’s spiteful comments –they were absolutely unacceptable and this needs to stop."

After the final vote on the resolution Tuesday night, Texas Rep. Al Green, a Democrat, reintroduced articles of impeachment against Trump. Omar and Tlaib, in a press conference Monday, had pushed for Trump to be impeached, saying he had been "credibly accused" of criminal collusion with Russians -- despite the contrary results of Special Counsel Robert Mueller's probe.

Green said his revived impeachment effort was related to Trump's comments this weekend. An impeachment resolution is privileged, meaning it goes to the front of the legislative line. It will be up for consideration either Wednesday or Thursday.

However, it is not guaranteed that there will be a straight up-or-down vote on the articles of impeachment. The House could move to table, or set aside, Green’s measure. Therefore, the vote is not on impeaching the president, but whether to kill or set aside Green’s articles of impeachment. The vote is two steps removed from an actual roll call tally.