Trump is under 'constant assault' because he is an 'existential threat' to the establishment: Crowley

Former Assistant Treasury Secretary Monica Crowley joined 'Fox & Friends Weekend' to discuss why Donald Trump has been under 'assault' from the political establishment and how the raid has impacted his political trajectory.

Former Assistant Treasury Secretary Monica Crowley slammed the FBI's raid on Trump's Mar-a-Lago estate, calling it the latest in a string of "abominable acts" to remove the former president from the political sphere. Crowley joined "Fox & Friends Weekend" on Saturday to discuss why Trump is under "constant assault" from the political establishment.

MONICA CROWLEY: The absurdity of this case tells you that the regime has jumped the shark with this raid, and they are clearly aware of that. That is an outrageous assertion that somehow Donald Trump had our nation's most sensitive nuclear secrets. But they waited a year and a half to go get them. I mean, what's next that he's hiding nuclear missiles under his bed? The whole thing is absurd, and while there is some outstanding questions about classification, and we've been going back and forth on that issue, and perhaps that does need to be litigated all the way to the Supreme Court. We don't know that yet, but what we do know is that this is the latest in a long line of abominable acts against this president to try to undermine them and try to smear him and ultimately try to destroy him, remove him from the US political scene, and everybody is talking about the particulars of the Russia hoax or the two fake impeachments or January 6. But nobody is teasing it out to the broader question of why he is under constant assault, and guys, the only reason for that is because he is an existential threat to the entire ruling class and their absolute grip on power, and therefore, he must be destroyed.

WATCH THE ENTIRE INTERVIEW FROM "FOX & FRIENDS WEEKEND" BELOW: 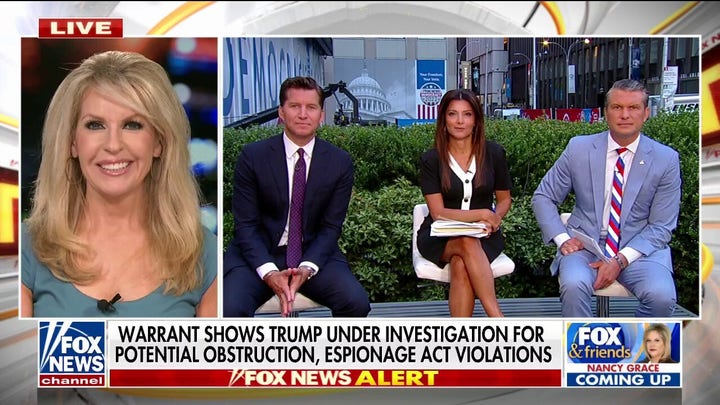