MSNBC’s Chris Matthews was noticebaly absent from the network’s South Carolina primary coverage Saturday evening, one day after being accused of “sexist” behavior by a former network contributor -- and then later misidentifying a politician while on the air.

Earlier in the week, Matthews had issued an on-air apology after drawing backlash for comparing the Nevada caucus victory of Sen. Bernie Sanders to the 1940 invasion of France by the Nazis.

In an op-ed for GQ on Friday, journalist Laura Bassett claimed Matthews had used sexist language when she would visit the MSNBC studio to appear on his show as a guest.

She recalled Matthews looking at her in an adjacent makeup chair before an appearance in 2016 and asking: 'Why haven’t I fallen in love with you yet?'" Bassett said she laughed nervously but Matthews kept making comments to the makeup artist. “Keep putting makeup on her, I’ll fall in love with her," Matthews allegedly said.

She said he made another comment about her makeup during a separate appearance. "Make sure you wipe this off her face after the show,” she wrote he said to the makeup artist. “We don’t make her up so some guy at a bar can look at her like this.”

Bassett said she decided to write the op-ed because of a “sexist” interview Matthews did with Sen. Elizabeth Warren, D-Mass., after the last debate in which he pressed her about her accusation that former New York Mayor Mike Bloomberg has once told a woman at his company to “kill” her unborn baby. Bloomberg denies he said it.

A feminist group has called for Matthews' firing over the interview.

Bassett said she wrote a similar op-ed in 2017 without naming Matthews because she was afraid to publicly accuse him at the time, but wrote many women reached out to her saying they knew who she was talking about.

She said while she didn't think Matthews' behavior rose to the level of criminal sexual harassment, it undermined her ability to do her job.

In 2017, it was reported that NBC paid $40,000 to a producer on Matthews’ show who claimed he sexually harassed her.

MSNBC has not confirmed the amount paid to the woman, nor has the network said whether the payment was made to settle a harassment claim.

An MSNBC spokesperson said at the time that executives were told that Matthews made inappropriate jokes and comments about the woman in front of others, that the matter was reviewed and it was determined the comments were inappropriate and made in poor taste but were never meant as propositions.

NBC did not immediately respond to Fox News' after-hours request for comment.

Then during his "Hardball" broadcast Friday, Matthews mistook Sen. Tim Scott, R-S.C., for Democratic U.S. Senate candidate Jaime Harrison, chalking it up as a case of "mistaken identity."

Harrison was appearing on "Hardball" to discuss his campaign to unseat Sen. Lindsey Graham, R-S.C., but the interview went off the rails when Matthews ran a clip of Scott standing beside Graham at that evening's Trump rally in North Charleston and assumed it was Harrison.

Both Scott and Harrison are African-American.

"Jaime, I see you standing next to the guy you're going to beat right there, maybe," he said. "Maybe? Maybe, maybe? Lindsey Graham?"

Soon Matthews realized his error and apologized to Harrison.

Harrison appeared to roll his eyes and looked shocked, but kept a smile on his face and answered Matthews' question.

'I will strive to do a better job'

Matthews also took fire for a comment he made about Sanders’ decisive victory in Nevada last weekend, comparing the candidate to the Nazis' defeat of France during World War II. 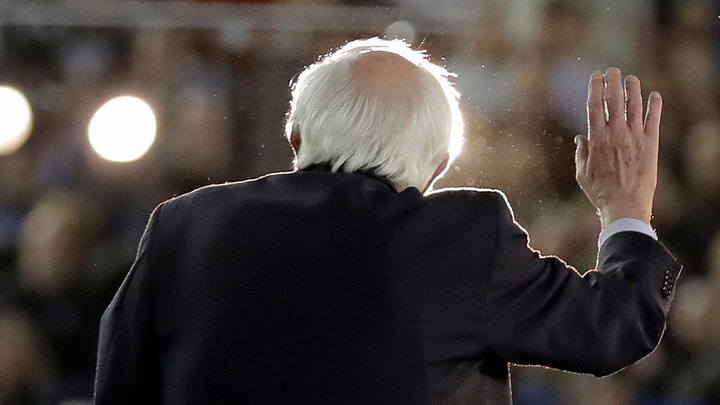 “I'm reading last night about the fall of France in the summer of 1940," Matthews said during the network's Nevada coverage. "And the general calls up Churchill and says, ‘It’s over,’ and Churchill says, ‘How can it be? You got the greatest army in Europe. How can it be over?’ He said, ‘It's over.’”

But many viewers were outraged by the comments -- and Matthews apologized Monday.

"Senator Sanders, I'm sorry for comparing anything from that tragic era in which so many suffered, especially the Jewish people, to an electorate result in which you were the well-deserved winner," Matthews said. "This is going to be a hard-fought, heated campaign of ideas. In the days and weeks and months ahead, I will strive to do a better job myself of elevating the political discussion. Congratulations, by the way, to you, Senator Sanders, and to your supporters on a tremendous win down in Nevada."