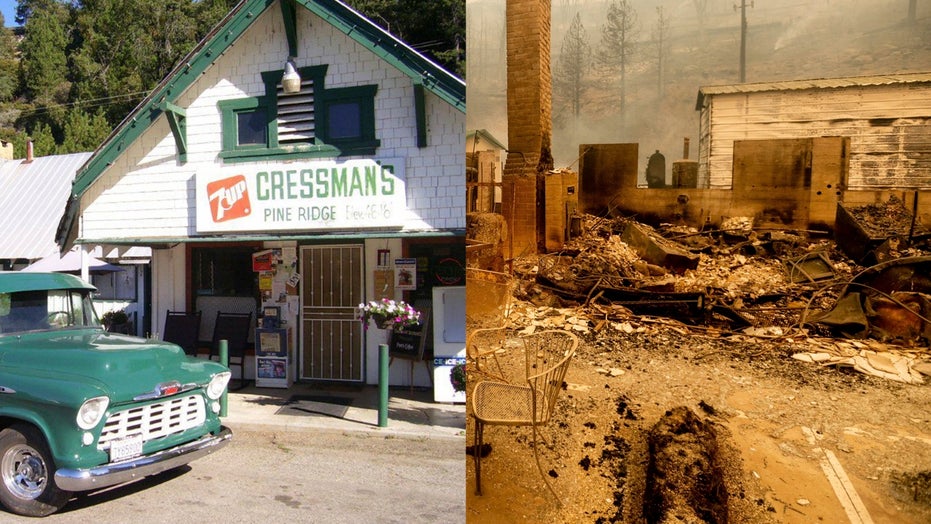 A mountain community grieves the loss of Cressman’s General Store in Shaver Lake, California. The iconic landmark has provided food and fuel to residents and vacationers for about 116 years. The owners describe the night the flames destroyed their family business and home.

The Creek fire in California has been destroying hundreds of homes and structures since Friday evening. Among them, a beloved and historic general store that has served the Fresno community since 1904.

Nestled in the mountains near Shaver Lake and China Peak ski resort, Cressman’s became the popular spot to stop for vacationers going to the lake or ski cabins, but it also provided food, fuel and supplies for local families and loggers.

“Cressman's has established a reputation in our area for just being such a special spot for people to stop at,” Cressman’s owner Tara Gillett and her husband Ty told Fox News. “Parents will tell their kids ‘I remember when I used to stop here when I was a kid.’ Families are just mourning with us and we’ve really seen that come alive in the past couple days. It's just being felt across the entire mountain.”

On Monday, Ty and a group of friends tried to prepare the store for the surging flames. They brought down over 40 trees and placed hoses and water pumps all around the area to help bolster its defense.

“We are very prepared, but we were not prepared for what was coming. And it ran us out of there very quickly,” Ty recalled. “We were basically completely surrounded by the fire by the time we left and it was throwing hot embers over our head.”

LIVE UPDATES: WILDFIRES RAGE IN CALIFORNIA AND OTHER WESTERN STATES

Ty accredited the firefighters and their expertise for getting them out of the area and keeping them alive that night.

The Creek fire wasn’t done with the Gillett family just yet. As Ty left Cressman’s, he watched the flames move across the forest, directly toward his home. The fire burned the house down to its foundation.

The Gillett's home in Pine Ridge, California, was completely destroyed by the fires on the same night their family business was scorched.

Ty and Tara, along with their two young children, had evacuated their home in Pine Ridge, which they say is just about a mile from Cressman’s, earlier that day and were able to save a few of their most valued possessions.

“I wish we had a do-over because even when I was packing, I didn't think that would be the last time I would be in my home,” Tara said. “So there's things now that I wish I would have gotten, like my wedding dress out so my daughter can play in it when she gets older.”

According to Cal Fire, approximately 14,000 firefighters are battling 28 major wildfires across California.

“The fire was so hot that it was hard to comprehend that it was burning things so fast that there was nothing left,” Ty said.

Ty and Tara took over ownership of Cressman’s last summer and say they plan on rebuilding the iconic general store so they can continue to serve the essential needs of locals and travelers.

The Gillett family in front of Cressman's General Store with its previous owner Keith Davis.

A GoFundMe page has been set up to help the Gillett family, the families of their employees, and other families affected by the Creek fire.

“I think seeing it be rebuilt is going to be a symbol of hope to our community. And I think people are going to want to come in again and kind of establish that normalcy,” Tara said.

This year, wildfires have now burned over 2.5 million acres in California.  There have been eight fatalities and over 3,700 structures destroyed.