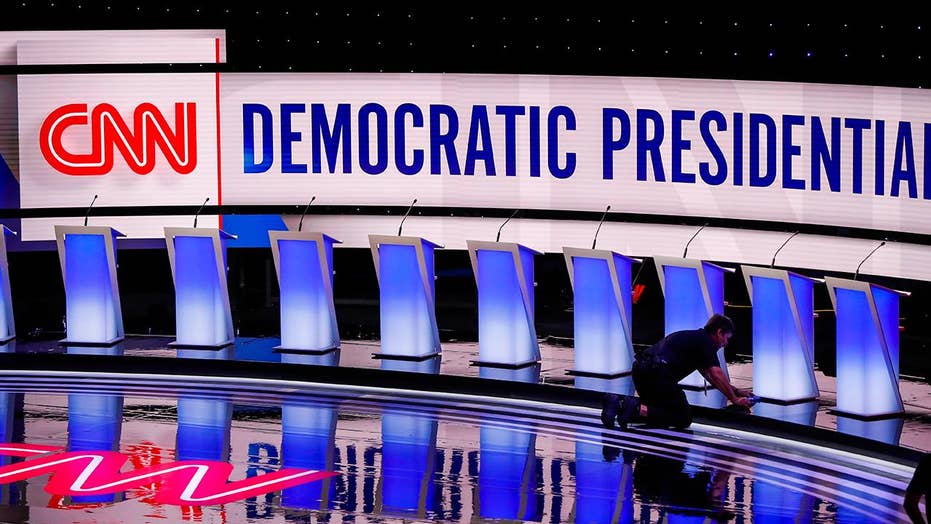 Round 2: Democratic debate predictions from 'The Five'

The much-anticipated rematch between Joe Biden and Kamala Harris began at the outset, and the newly energized former vice president threw the first punch.

And Harris was instantly on the defensive, a mirror image of the faceoff she clearly won last month.

As they threw facts and figures at each other in CNN’s second Democratic presidential debate, Biden’s quicker and sharper speaking style may have been more important than the charges and countercharges. He had one overriding goal—to dispel the widespread criticism that he seemed too old and slow last time—and he cleared that bar.

But on substance as well, Biden eviscerated Harris’ newly minted plan as one that would take 10 years, cost $3 trillion and eliminate employer-based private insurance. When he said, “You can’t beat President Trump with double talk,” it was game on.

Harris, stumbling a bit, accused Biden of leaving 10 million people uncovered and said she’d break up the insurance companies’ status quo. Biden said he’d build on ObamaCare with a public option. But thanks to aggressive questioning by Dana Bash and Jake Tapper, the California senator finally acknowledged that she would wipe out employer-based plans that now cover more than 150 million Americans.

While other candidates like Bill de Blasio and Cory Booker occasionally broke through, CNN initially gave the two top contenders so many rebuttals that it turned into the Joe-and-Kamala-Show. Harris, in fact, spent most of the first hour with her body turned toward Biden.

In an echo of Tuesday’s debate, several of the candidates strongly defended stances on government-run health care and lenient border policy that will be difficult to defend in a matchup with Trump. But this time, Biden, not long-shot candidates, was pushing back, underscoring his status as the left-center establishment guy.

On immigration, Julian Castro dismissed criticism of decriminalizing border crossings by saying that “open borders is a right-wing talking point.”

But when Don Lemon asked Harris whether she was supporting open borders, she completely ignored the question and launched into describing her visit to a private detention facility with 2,700 children. He did not follow up.

The liberal Lemon did get Biden to say he would “absolutely not” repeat Barack Obama’s practice of deporting 800,000 immigrants, a policy that was widely denounced on the left.

Booker and de Blasio did a tag team against Biden when he refused to say whether he had privately advised Obama against the practice, putting him on the defensive.

But Biden stayed in counterpunching mode. When Booker slammed the crime bills that the longtime senator has sponsored since the 1970s, Biden decried the corrupt police department and stop-and-frisk policies when Booker was Newark mayor.

As the debate wore on, Harris faded a bit while Biden remained the center of gravity on the Detroit stage. That’s because the other candidates took turns whacking at his long record, the price of being the frontrunner. The combined assault may have taken its toll in the second hour.

But people like de Blasio, one of the sharpest critics, have no hope of winning the nomination.

In a reprise of their busing battle, Harris insisted her position is different from the one he took in the 1970s. But Biden countered that she took no action as California attorney general against two of the most segregated school districts in America.

Lemon, who was assailed by Trump as “dumb” for calling him a bigot Tuesday night, referred to his “racist tweets” in a question about Baltimore. But perhaps mindful of the backlash, Lemon stuck to asking contenders how they could heal the racial divide in America.

The second hour was dominated by candidates throwing out their oppo research against their rivals, and Harris bore some of the brunt. But it was hard for viewers to sort out amid the blizzard of accusations.

Kirsten Gillibrand cornered Biden with an old op-ed in which he appeared to question whether women should work outside the home. Harris piled on over his change of position on the Hyde Amendment barring federal funding of abortion.

Biden clearly took some nicks and cuts in the debate, but no one can say he was passive or low energy. Harris tried to stay on the offensive, but she no longer had the advantage of surprise.