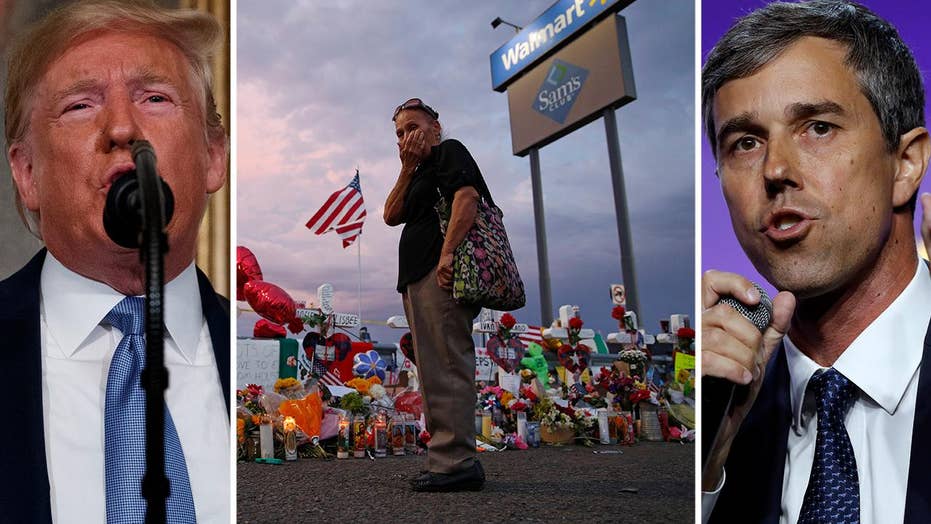 Why are Democrats urging Trump not to visit El Paso, Dayton in wake of mass shootings?

The war of words continues between President Trump and 2020 presidential candidate Beto O'Rourke, who on Wednesday declared Trump a "white supremacist" and said that the United States "has been racist since it's been a country."

As the president visited O'Rourke's hometown of El Paso, Texas, following the mass shooting there last weekend that left 22 people dead, the former congressman ratcheted up his attacks during an interview on MSNBC. He insisted another shooting will occur because of Trump's rhetoric, which some say influenced a manifesto that investigators suspect was the El Paso gunman's.

"What happened in El Paso is not an isolated incident," O'Rourke told MSNBC correspondent Jacob Soboroff. "After the president warned of caravans, you had somebody go into the Tree of Life synagogue in Pittsburgh warning of caravans. You had the mosque in Victoria, Texas, burned to the ground on the day President Trump signed his executive order to ban Muslim travel to the United States. So there are very real consequences to his words, to the tweets, to the racism that he fans."

O'Rourke continued: "He's not the source of racism in this country. This country has been racist as long as it's been a country, but he is certainly fanning the flames, he is certainly making violence like this more possible and more real."

"He is," O'Rourke responded. "He's also made that very clear. He's dehumanized or has sought to dehumanize those who don't look like or pray like the majority here in this country."

The presidential candidate has been very outspoken with his attacks against Trump, calling him a "racist," blaming him for the shooting and saying he wasn't welcome in El Paso on the heels of the bloodshed.

Trump fired back late Tuesday night on Twitter and mocked his "phony name."

"Beto (phony name to indicate Hispanic heritage) O’Rourke, who is embarrassed by my last visit to the Great State of Texas, where I trounced him, and is now even more embarrassed by polling at 1 percent in the Democrat Primary, should respect the victims & law enforcement - & be quiet!" Trump tweeted.