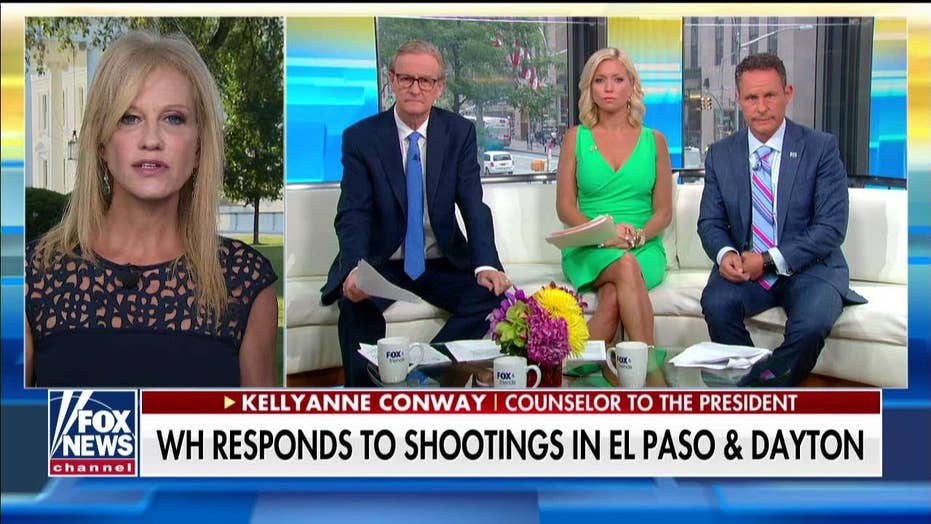 President Trump on Tuesday ripped into 2020 presidential candidate Beto O'Rourke, telling him to "be quiet" ahead of his visit to the Democrat's hometown of El Paso, Texas, following last weekend's shooting that left 22 dead.

Over the past several days, O'Rourke has slammed the president, whom he has partially blamed for the massacre, pointing to his rhetoric about Hispanic immigrants that was echoed in the killer's manifesto. The former congressman declared that Trump is a "racist" and compared his language to Nazi Germany's Third Reich. He also compared Trump's North Carolina rally-- where the "send her back" chant took place-- to "Nuremberg."

"That is a leader reveling in the hatred and the racism of the people that he purports to serve and to lead," O'Rourke said Monday.

Trump responded to O'Rourke and claimed the candidate is using a "phony name" in an attempt to appeal to voters.

"Beto (phony name to indicate Hispanic heritage) O’Rourke, who is embarrassed by my last visit to the Great State of Texas, where I trounced him, and is now even more embarrassed by polling at 1 percent in the Democrat Primary, should respect the victims & law enforcement - & be quiet!" Trump wrote in a late-night tweet.

O'Rourke responded to Trump's tweet and doubled-down on his claim that Trump is responsible.

"22 people in my hometown are dead after an act of terror inspired by your racism," he tweeted. "El Paso will not be quiet and neither will I."

The president referred to the rally he held in El Paso back in February amid the national debate about the migration crisis and had previously boasted about his crowd size in comparison to O'Rourke, who held a competing rally on the same night.

Trump will also visit Dayton, Ohio on Wednesday, where nine people were killed in another mass shooting on Sunday. Trump's feud with O'Rourke foreshadows what could be a tense visit to both areas. Democrats have attempted to link Trump's rhetoric about immigration to the El Paso shooting.

The White House said that Trump's visit will be similar to those he has made to other communities affected by gun violence, and that he will meet with first responders, survivors and mourning families.

"What he wants to do is go to these communities and grieve with them, pray with them, offer condolences," White House spokesman Hogan Gidley said Tuesday. He said Trump also wants "to have a conversation" about ways to head off future deadly episodes.