Fox News contributor Joe Concha reacts on ‘Fox and Friends’ to Rep. Alexandria Ocasio-Cortez’s push to ‘rein in’ the press.

Media watchdogs are shocked and appalled that Rep. Alexandria Ocasio-Cortez said that Congress is looking into media literacy initiatives, including a commission to help "rein in" misinformation in the wake of last week’s deadly breach of the U.S. Capitol – and one critic slammed AOC’s suggestion as "wholly un-American."

During a lengthy live stream on Instagram on Tuesday night, the leader of the so-called "Squad" discussed the aftermath of the Capitol riot, how she feared for her life during the chaos and what needs to be done going forward.

At one point, Ocasio-Cortez read a question from a viewer who asked if there is discussion in Congress on "truth and reconciliation or media literacy initiatives" to help with healing.

"I can say, there is absolutely a commission being discussed but it seems to be more investigatory, in style rather than truth and reconciliation, so I think that’s an interesting concept for us to explore, and I do think that several members of Congress, in some of my discussions, have brought up media literacy because that is a part of what happened here and we’re going to have to figure out how we rein in our media environment so that you can’t just spew disinformation and misinformation," Ocasio-Cortez said.

"Fox & Friends" anchor Steve Doocy said he was "a little troubled" by Ocasio-Cortez’s suggestion and enlisted The Hill media columnist Joe Concha to help figure out who would decide what media gets reined in under the progressive lawmaker’s plan.

"Let’s unpack this proposal, she wants to basically establish a Ministry of Truth, we’ve all read ‘1984’ and, you know, to determine what is truth and what is not. So who sits on this committee exactly? Eric Swalwell? Adam Schiff? Because they seem to have some challenges when it comes to telling the truth," Concha said.

"How does Mrs. Ocasio-Cortez define truth exactly? She was asked in a ["60 Minutes"] interview, this was a couple of years ago after she was fact-checked on some very dubious claims, about those particular claims and she said, ‘People want to really blow up one figure here, or a word there, I would argue they are missing the forest for the trees, I think there is a lot of people more concerned about being precisely, factually, semantically correct than being morally right,’" Concha said.

"Oh, so it’s not about being factually correct, it’s what she sees as being right and wrong from a moral perspective," Concha continued. "Let’s say I want to argue against defunding the police or adding two states, which therefore would add four Democratic Senators, does that make me morally wrong and therefore do I have to testify before this committee? Am I pulled off the air? That’s the thing when you have a Democratically controlled Washington -- Congress, Senate and White House – this sort of thing in terms of government regulating speech should stay in China, or stay in North Korea or, I don’t know, ‘1984.’"

AOC: 'WE CAME CLOSE TO HALF OF THE HOUSE NEARLY DYING' DURING RIOTS

"Perhaps in the political systems favored by AOC citizens are impelled to look to government for ultimate truth, but that’s not the case in the United States. At least, not yet. Here, the Constitution ‘reins in’ Congress from intruding on the speech of citizens, journalists, or any private institutions, not the other way around," Harsanyi wrote. "As a practical matter, we can already envision from ‘lived experienced’ — as a progressive might say — how sanctioning the state to adjudicate the veracity of journalism can be abuse."

Harsanyi doesn’t feel that hyper-partisan reporters should be responsible for determining what is allowed to be uttered in America.

"We need only point to our media ‘fact-checkers,’ journalists with political and ideological biases who have regularly, and arbitrarily, labeled completely debatable contentions as falsehoods, while either ignoring or justifying scores of other unsettled contentions," Harsanyi wrote. "Are these the arbiters of facts who will be manning the government commission appointed by those storied truthtellers in congress?"

He noted recent mainstream media and big tech gaffes, such as Twitter censoring damning stories related to Hunter Biden and endless promoting alleged collusion between the Trump campaign and Russia, as an example of why the press shouldn’t sit on AOC’s hypothetical commission.

"Has anyone ever proposed a truth commission to heal the nation from those wounds? This kind of state intrusion into discourse — on whatever level AOC envisions it — would, like all other facets of society lorded over by Congress, inevitably lead to giant rent-seeking corporations like CNN, ABC, NBC, Washington Post, The New York Times, gaining favor with government and consolidating power," Harsanyi wrote.

"The less powerful would either be left to contour their speech to please the state’s factcheckers or be branded liars. The press should challenging those in power, not obsequiously trying to earn gold stars from unelected bureaucrats on a state-run committee," Harsanyi continued in the scathing column.

"It’s just creepy, not to mention wholly un-American, for an elected official to advocate the state as adjudicator of veracity of our political speech. It’s also crassly hypocritical. If anyone could use a truth commission, it’s Congress," he concluded. 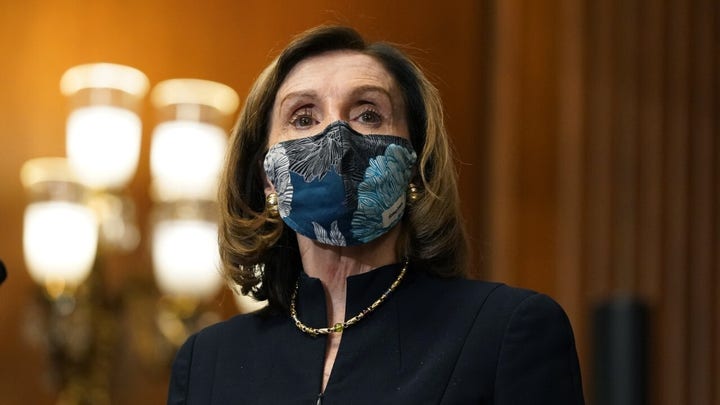 "They already obey… they’re an arm of the Democratic Party," Bruce said. "What they’re talking about are dissenters, talking about arguments like this… a conversation that critiques and dissents within the framework of what they’re doing but it also exposes, doesn’t it, the idea of the power that they think they have. That this is now what their job is. Their job, instead of this kind of garbage, is to try and convince Democrat governors to distribute the damn vaccine."

Bruce said Democrats should be keeping Americans safe from foreign adversaries, in addition to helping slow the spread of coronavirus, but instead worry about controlling what people are allowed to say.

"They’re down at their little desks looking at what it is they can do to control the conversations in the United States," Bruce said. "Considering what we’ve just been through, and the imperative of transparency, we need more conversation. We need more openness, and of course the American people… know very well what they want to hear, what’s good, what’s not good, but it also presumes… that the American people are babies, that they need to be controlled by government."

The office of Ocasio-Cortez did not immediately respond to a request for comment.