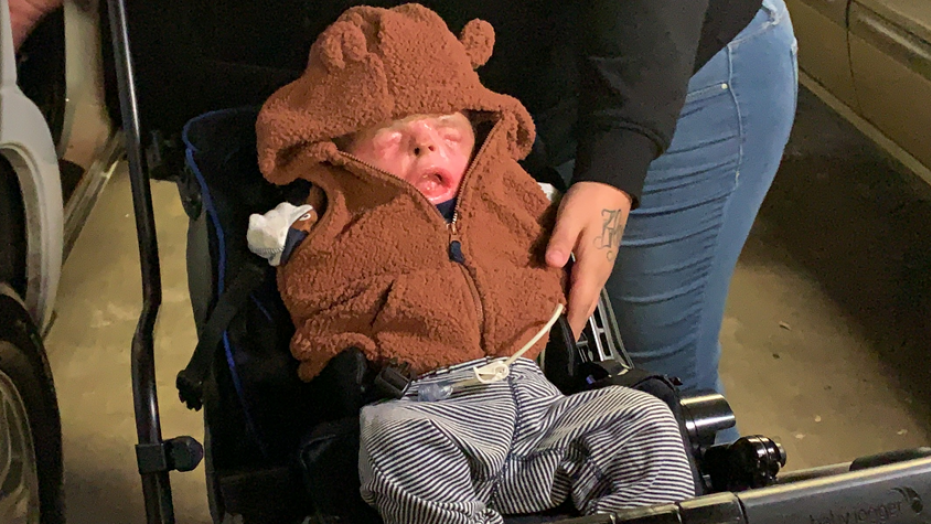 Nearly six months after receiving a treatment devised from his own skin cells, a 10-month-old baby in Texas who was born missing nearly all of his skin has gone home to his family for the first time.

Ja’bari Gray, who was released from Texas Children’s Hospital in Houston on Wednesday, was born with his eyes fused shut, his fingers and toes fused together, and large areas of skin missing from his limbs and torso.

Doctors aren’t sure what caused the condition, but the boy, who weighed just 3 pounds on his New Year’s Day birth, has been making steady progress since undergoing an innovative procedure in May. His medical team first sent a biopsy of his skin to Vericel Corporation in Cambridge, Mass., where researchers used his own cells to grow new skin, Fox 26 reported at the time.

“They grow and divide making a very thin sheet about four-to-eight cells thick across the bottom of the flasks that we grow them in,” Dr. John Hopper, chief medical officer at Vericel Corporation, told the news outlet. “We have 24 hours from when it leaves the controlled environment here in Cambridge to when it should be placed on the patient.”

Priscilla Maldonado, the boy’s mother, told the Associated Press that her son’s procedure was successful and that he gained weight and color in his skin. In September, doctors were able to remove his breathing tube, and he was able to be held without medical equipment or protective dressings for the first time.

Ja'bari, who is now 10-months-old, had only ever been outside when he was transferred from the hospital where he was born to Texas Children's Hospital, where he has been receiving treatment ever since. (KRIV. )

“The strength is amazing for that boy, to be able to do all that,” Marvin Gray, Ja’bari’s father, said, according to the Associated Press.

The hospital said that Ja’bari will face additional procedures in the future; however, at this time, there are no plans to open his eyes.

“It’s kind of scary,” Maldonado said of her son coming home for the first time, adding that she spent several days learning how to care for him ahead of his release.

Although several tests have ruled out certain skin conditions, Ja’Bari currently remains without an official diagnosis, according to the San Antonio Express-News. The family, which includes his two older siblings, has relocated to Houston in order to be close to his medical team.