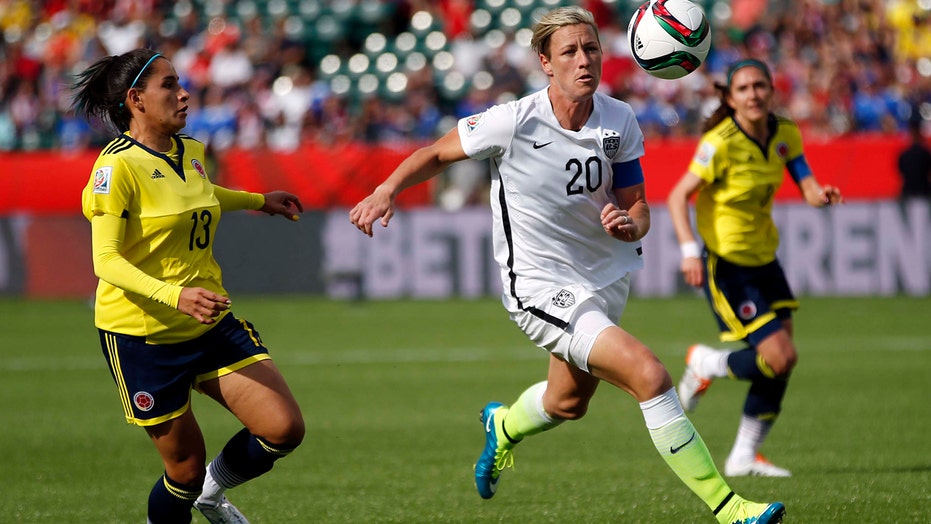 When U.S soccer champion Abby Wambach suffered a concussion in 2013 she realized just how quickly her career could be taken away from her. Today, she’s raising awareness on concussion safety and a new wearable device that can help

World Cup soccer champion Abby Wambach has spent her career working hard and playing harder, but when she suffered a concussion in 2013 she realized just how quickly her career could be taken away from her.

The two-time Olympic gold medalist had been struck in the head during a play to clear the ball from a defensive zone, and immediately began experiencing some of the classic symptoms associated with a concussion.

"It was a pretty heavy impact and for me my eyesight immediately went-- I felt a little dizzy, very disoriented, and quite frankly it was kind of scary because I wasn’t in my sane mind, and I was supposed to be because I was playing in a soccer game,” Wambach told FoxNews.com.

A concussion, also known as mild traumatic brain injury (TBI), is when the brain is injured, usually by a hit to the head or a fall and causes the brain to bounce against the inner wall of the skull. This type of movement can stretch and damage brain tissue and nerve connections within the brain. In addition to the symptoms Wambach experienced, patients may suffer from headaches, light and sound sensitivity, nausea, vomiting, dizziness or imbalance, insomnia and difficulty thinking or concentrating.

“The degree to which the brain is injured is going to greatly affect the severity of the outcome. If you have a really bad head injury it can lead to coma and even death,” Dr. Joshua Cohen, a neurologist at Mount Sinai Roosevelt’s Headache Institute and an assistant professor of neurology at The Icahn School of Medicine at Mount Sinai, told FoxNews.com.

“But for mild brain injury, like a concussion, the worst symptoms that I’ve seen are people with really severe or ongoing headaches, bad cognitive problems or bad mood changes that really change their outlook on life-- depression or anxiety that really make it hard for them to engage in their [normal] activities,” he added.

Studies estimate that nearly 300,000 sports-related concussions occur each year, which doesn't account for the hundreds more that go unreported or ignored.

Wambach can attest that playing any sport comes with some level of risk, whether it's a sprained ankle or a blow to the head, which is one of the reasons why the 2012 FIFA World Player of the Year has become an advocate for concussion awareness.

“It’s so important to make people mindful that 'You know what, man-- I just took a major head impact and I need to go off the field and check myself out,' no matter what game or environment you’re in, because I’ve been there, I’ve done that and I’ve thought 'I can muscle through this' and that's something that needs to become part of our conversation that we end,” Wambach said.

Currently, the standard of care for an injured athlete aged 13 years and older is a Sport Concussion Assessment tool (SCAT3), which involves a symptom check list and a series of tests on memory, coordination and balance.

“It’s a simple tool that can be used on the sideline by primarily athletic trainers, or trained medical personnel,” Tom Kaminski, professor of kinesiology and applied physiology at the University of Delaware (UD) and director of UD's athletic training education program told FoxNews.com. “And then based on how the athlete scores with that tool a decision is made as to whether or not they could potentially go back to competition.”

Kaminski has been tracking head impacts in women’s collegiate soccer teams for more than twenty years and even monitored Wambach when she played for the University of Florida in 1998. Kaminski and a team of researchers at UD are also involved with a 3-year, $30 million NCAA-U.S Department of Defense concussion study, that is aimed at better understanding the natural history of concussions and improving the safety of NCAA student-athletes and military service members.

While research continues to break new ground on concussion risks and management, some athletes are finding ways to stay safe through new technology.

Safety gear in the form of wearable technologies—including helmet and headband sensors-- claim to monitor and measure head impacts in a wide range of sports.

Triax Technologies is one company producing smart impact monitors (SIM-G) worn as a headband or a skullcap for helmeted sports.

A small sensor in the headbands or skullcaps tracks the G-force and frequency of head impacts and sends the data in real-time to a smart device on the sidelines to observing coaches and trainers. The sensor measures the linear and rotational acceleration and forces that hit the head.

The University of Delaware was the first to pilot Triax’s measurement tool and uses their SIM-G monitors in part of an ongoing project involving the school’s women’s soccer team.

“It’s one more piece of information that we all can use to help make informed decisions, because I can’t tell you if a girl gets a hit to a head if its 60G’s, but the technology can and that can help the athletic trainers make better decisions about pulling these girls out of the game or not,” Kaminski said.

Wambach partnered with Triax in 2014 and has been wearing the impact monitor for the past year.

“I’ve headed the ball so many times throughout my career, [so] does it give me pause thinking about what my future looks like? Of course it does, so I want to put athletes in control of their lives so that they don’t have that kind of pause,” Wambach said. “So if they were to get a head impact or they were to have their head rung on some level, they would be able to have some sort of measureable device to see if it was over their threshold or not.”

While impact monitors can be used as a guide to indicate potential risk and improve training and evaluation techniques, experts stress that these new technologies cannot diagnose a concussion.

"None of [it] takes into account what actually happens inside the brain because of those hits or the duration of time that that hit happens, all which will affect the likelihood of getting a concussion and will determine how severe the concussion could be,” Cohen said.