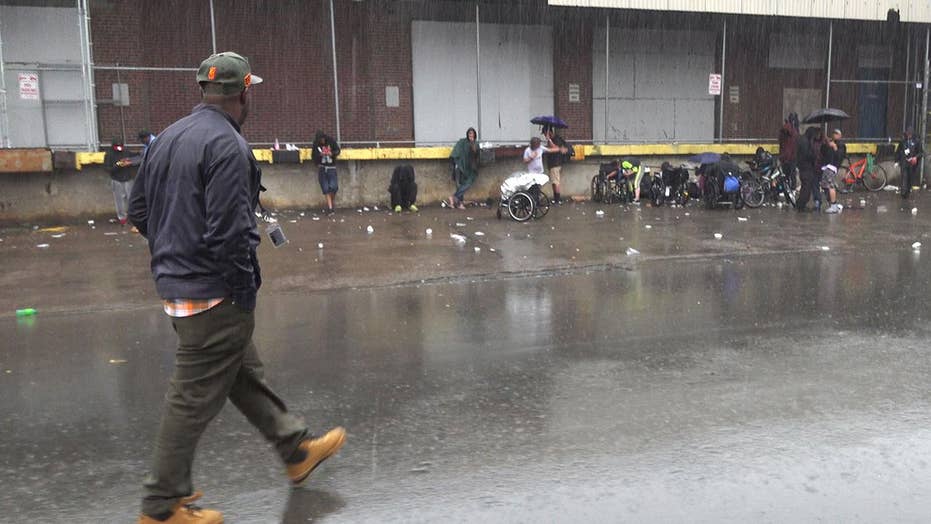 As the epidemic continues to break records, police departments are shifting strategies of how they interact with people with addiction.

About four years ago after he was picked up by police on a misdemeanor charge, an officer sat him down in a holding room at the police station.

"The police asked to come in, and said to me, 'Hey listen, sit down and talk with me, we want to help and support you," Perryman said. "I was shocked."

ADDICTED TO MEDS: ONE NURSE'S STORY OF ADDICTION AND RECOVERY

That conversation convinced him to go get treatment for his addiction, he said. Now almost four years into his recovery, he walks the streets he once sat on, working with the Boston Police to reach out to people whose shoes he was once in.

"It gives them hope to lead them to believe that they could do the same thing," Perryman said.

As the addiction epidemic across the country continues to break records, police departments are rethinking their approach to how they interact with people with substance abuse disorder. Instead of arresting them, they are urging them to get treatment and helping them get into recovery.

One such effort is the Police Assisted Addiction and Recovery Initiative's Recovery Corp program. It is an AmeriCorp-affiliated program that is placing volunteers like Tyshaun in police departments across the country as a resource for their communities.

The initiative was born in Gloucester County, Mass., and will now expand to 13 other police departments in Arizona, Colorado, Illinois, Maine, Michigan, Rhode Island, Wisconsin, Washington and elsewhere in Massachusetts. A similar program called "Straight... To Treatment" was launched in March in Burlington County, N.J. In both programs, people can come into the police station, surrender their drugs and get referred to treatment — facing no questions or criminal charges. Some departments have also started to reach out to those they know are addicted or were recently saved from an overdose, directing them to treatment.

Under programs like P.A.A.R.I. and "Straight... To Treatment," people can surrender drugs and paraphernalia and get referred to treatment without the fear of criminal charges.  (Rob DiRienzo/Fox News)

But the new approach is also drawing controversy.

There was an uproar in Seattle after police in the city stopped charging people for possession of small amount drugs — heroin, meth, and crack, notwithstanding. Critics argued the policy has exasperated the city's addiction and homeless problem.

Critics of the problem say the hands-off approach has made some areas unlivable. The approach, they claim, is not holding people accountable for their actions and leading people to believe they can take drugs and face no consequences.

Todd Wiebke, a former police officer in Seattle, told the Washington Post recently that while well-intentioned, the non-arrest approach is causing property crimes to go up as people commit crimes to fuel their addictions. He said it's gotten to the point in Seattle where children walk past needles to get home.

“As a society, the way we are treating the weakest amongst us is to allow them to live off the side of the road,” Wiebke told the Post. “Those conditions we have created are built up off narcotics.”

Those in favor of the program say much of the focus is centered around people with substance abuse and changing their perception of the police — and vice versa.

A 38-year veteran on the force, Hingham, Mass. Police Chief Glenn Ollsen looks back at his first drug arrest with a degree of shame.

"I just thought that this person that I arrested was the kingpin of the world," Ollsen said. "It was just somebody, a family member a loved family member that has an addiction problem. I thought he was a low life of society. I didn't care about his family. I sort of look back and say like that was really wrong of me to do that."

Ollsen said that since the program was implemented in his county of Plymouth County, Mass., the number of both fatal and non-fatal overdoses has decreased in the last year. He also credits a database of overdoses shared between the county's 27 departments.

"We can't do judgment," Ollsen said. "I don't care how many times I have to Narcan somebody. Maybe that sixth time will be the one that's going to make them finally get the treatment."

Tyshaun said he often has to reassure people that he won't get them in trouble.

"You don't have to be arrested because you have a disease," Perryman said. "I'm going to work with the police to make sure you don't get arrested."

"Before this kind of law enforcement movement, your only tools as a police department arrest somebody or do nothing," said Hunter, who conceived of the Recovery Corp concept. "And so this is giving them that third tool of connecting somebody to services."

In Massachusetts alone, P.A.A.R.I. said its members have counseled 6,771 people, referring nearly 800 to treatment. They hope to replicate those numbers in the other regions the program is expanding.

Dr. Wendy Dickinson, a psychologist who specializes in addiction treatment, lauded the new outreach initiatives as a step in the right direction.

"The more we have programs like those that give people an opportunity, the more we're going to change the narrative," said Dickinson, adding though she does not think the solution ends with police. "I think the solution is going to have to be bigger than that. I think it's going to really rest on all of us to get involved in our communities to understand what's going on."

In the meantime, for Recovery Corp members like Tyshaun, talking to members of his own community going through the same strife he did, gives him a renewed sense of hope.

"It keeps me motivated and inspired," Perryman said. "You know, I get a natural high for showing that type of capacity of love."