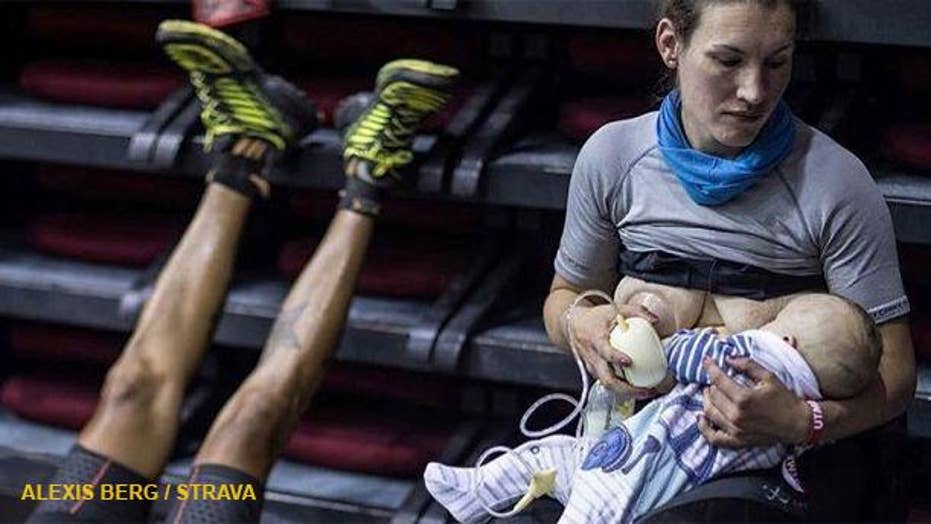 Sophie Power from London, stopped partway through a 43-hour mountain race to breastfeed her 3-month-old baby to draw attention to a policy that didn't allow pregnant women to defer participation.

A British ultra-marathoner is getting kudos from athletes and parents around the world after photos of her breastfeeding her 3-month-old while pumping during a rest stop 16 hours into the 107-mile race surfaced online. Sophie Power, who completed the Ultra-Trail du Mont-Blanc (UTMB) in 43 hours and 33 minutes, said she feeds baby Cormac every 3 hours at home.

“Oh my god I was in agony!” the 36-year-old mother of two told Runner’s World. “Cormac usually feeds every 3 hours and it took me 16 to get to Courmayeur where he could first meet me so I was hand expressing everywhere I could en route. I was so relieved he was hungry!”

She had her husband meet her at various aid stops along the course so that she could pump milk for him to bring back for Cormac.

Power said that the UTMB is an iconic, "bucket list" race for serious ultra-runners, and that it takes two years of accumulating enough points to even be considered for entry.

Power shared that she stopped running five months into her pregnancy, and tailored her workouts to remain in shape.

"There were so many things that had to come together for me to toe the line," Power said, via email. "I didn't start running until eight weeks after birth, but I was in the gym 10 days after on the stairmill. My husband and I made a decision that enough was in place that I could at least start and we would see how it went."

Power said she consulted with her doctor at a six-week post-partum check up and they worked on a race plan that would keep her safe.

"I made sure I was not doing any long-term damage, which was my priority, and in fact the focus on the race definitely helped me recover quicker," she said. "My pelvis is not completely back together so I had to take it gently on the downs, but I listened carefully to my body the whole way round."

On Sunday, Power shared a touching photo on Instagram of her holding her 3-month-old and the hand of her 3-year-old while crossing the finish line along with some details of her race.

“A week ago I was at the top of Flegere about to run down the mountain into Chamonix and finish UTMB. I’d about 20 minutes sleep over 2 nights – my body was tired and I was hallucinating,” she wrote. “What kept me going was how excited I knew  Donnacha was about running with me to the finish. He’d done his race earlier in the week and had waited so patiently to help me on mine. This captures the picture in my mind so beautifully I did have to tell him to slow down though!”

In a previous interview with The Evening Standard, Power had shared that she took up running in 2009, and had learned to fit her exercise regime around her life.

“I run to work after nursery drop off and do relay intervals in the park at weekends with my husband as Donnacha plays,” she had told the news outlet."