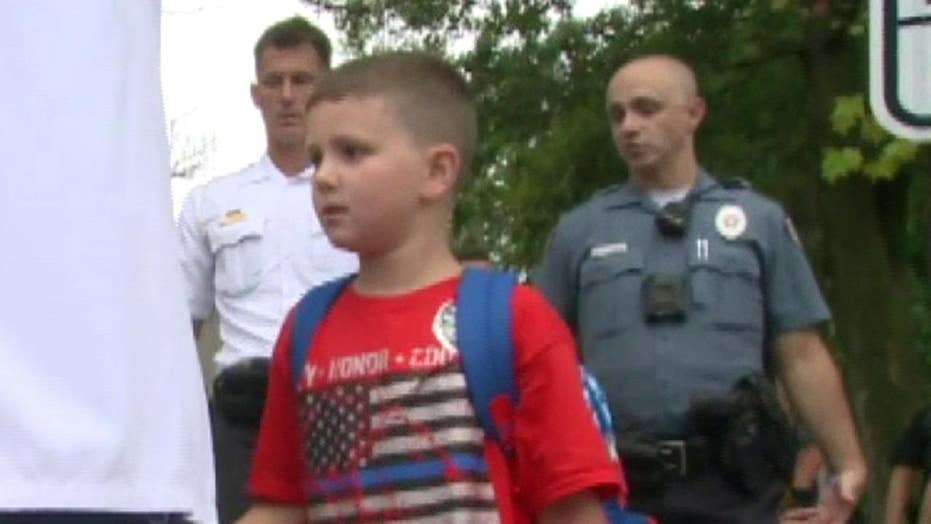 The five-year-old's father, police officer Andy Mattaline, was recently diagnosed with cancer and was still recovering from surgery when the time came for his son Carmine's first day of kindergarten. His fellow officers gladly stepped in.

A Missouri police officer fighting cancer had a special first-day-of-kindergarten surprise for his 5-year-old son who has autism.

Woodson Terrace Officer Andy Mattaline was overcome with emotion when doctors at Saint Louis University Hospital cleared him to leave in his wheelchair for a few hours to attend his son's first day of school in the Rockwood School District.

"This is one of my biggest days and I just didn't want to miss this," Mattaline, who has been hospitalized and recovering from surgery for esophageal and stomach cancer, told FOX 2 of St. Louis about his son, Carmine. "He means the world to me. We've been through a lot together."

The surprise got even bigger when Mattaline was joined by more than 20 police officers from at least 10 departments who promised to step in and walk his son to school in the event that the father of two was too sick to make it himself.

"I just love the support. ... I can't thank anybody enough," Mattaline said.

“We’re friends but we’re family also," Officer Chris Kaatman told FOX 2. "We want to do whatever we can to again make this day special for him and his family.”

It was an emotional moment for Andy's wife, Mary, and their 3-year-old daughter, Evelyn, who had been preparing Carmine to cope with his autism in time for the first day of school.

“It’s pretty amazing. It’s so touching to see everyone here and everyone that hears about Andy wants to be there for Carmine,” Mary Matteline said.

"I just can't wait to release him into the world," Andy Mattaline said. "To his first step to transition into becoming something we all want to see him flourish into."