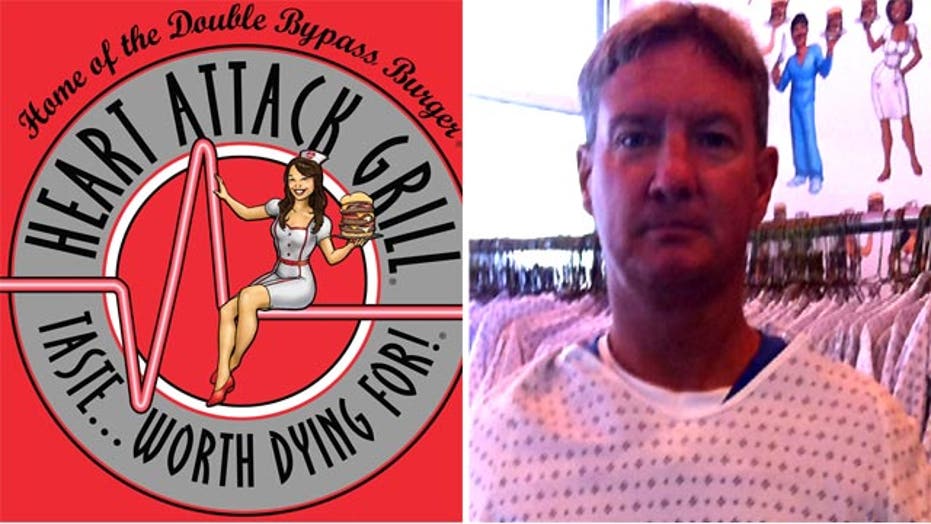 The unofficial spokesman for the infamous Las Vegas restaurant Heart Attack Grill has, you guessed it, died of a heart attack.

John Alleman, 52, was waiting for a bus in front of the restaurant last week when he suffered cardiac arrest and was removed from life support Monday afternoon, the restaurant's owner Jon Basso told the Las Vegas Sun.

The Heart Attack Grill's slogan is "Taste Worth Dying For" and it is known for its medical theme and high-caloric menu, which features items like the record-breaking 9,982-calorie, 3-pound Quadruple Bypass Burger.

Alleman was prescribed such foods so often that he was featured on official clothing from the Heart Attack Grill, where he was depicted as "Patient John" even though he was never on the restaurant's payroll.

Despite his unofficial status, Alleman would stand outside the restaurant hawking burgers when he wasn't working as a security guard at an abandoned high-rise construction site.

In 2011, a man had a heart attack in the restaurant prompting customers to laugh and take pictures of what they thought was a publicity stunt.

And then in April 2012, a woman in her 40s collapsed eating a double bypass burger, smoking cigarettes and having a margarita.

"(Alleman's death) isn't going to stop us from what we're doing. People have got to live their lives," Basso said.