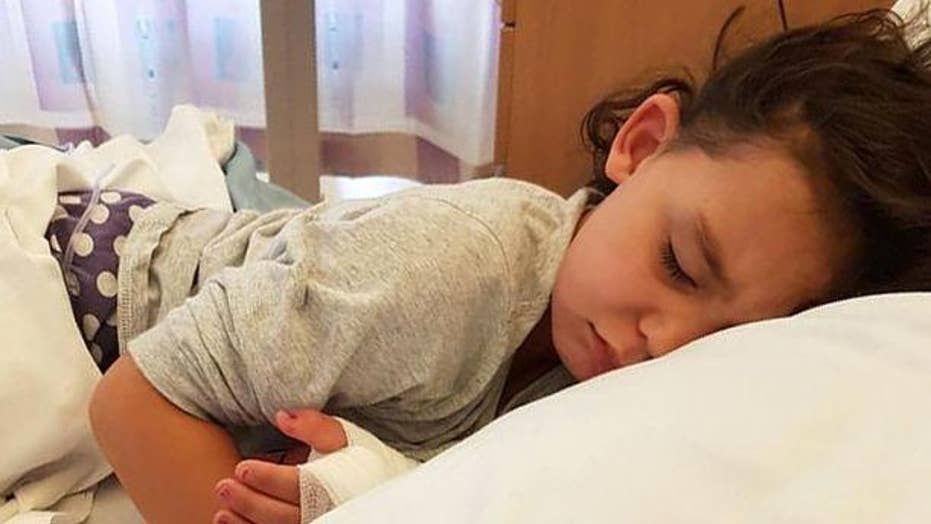 A 4-year-old little girl from the U.K. allegedly contracted a life-threatening infection on her foot after trying on shoes while barefoot.

A mother in the U.K. is warning others about the danger of trying on shoes without socks after her 4-year-old daughter allegedly contracted a life-threatening infection on her foot from doing so.

Jodie Thomas, of South Wales, said that her daughter Sienna typically wears socks, but because it was summer she had been wearing sandals.

“The shoes she liked had been tried on by other little girls and that’s how Sienna picked up the infection,” Thomas, 26, told The Sun.

The trouble started for Sienna the following day when she began complaining of pain in her foot. (Jodie Thomas)

She said her daughter was crying in agony the day after their shopping trip, and that the infection soon spread up her leg causing a high temperature.

“I drove her straight to the hospital, she was shaking and twitching – it was horrible to see my little girl like that,” Thomas told The Sun. “They said it was sepsis and thought they would have to operate.”

Doctors told Thomas it was sepsis, and feared that they would have to operate. (Jodie Thomas)

Sienna, who was treated at Prince Charles Hospital, spent the next five days having the infection drained out of her leg, and was able to avoid surgery. On Aug. 24, Thomas posted pictures of her daughter’s infected foot on Facebook.

“For all parents please put socks on you’re [SIC] children whole trying new shoes on,” she wrote, in part. “I’m guilty for not doing it for mine and myself, but this can be the outcome infection spreading throughout the body. You don’t know whos [SIC] feet has been in them beforehand!!”

Thomas told The Sun that she knew of things like athlete’s foot potentially being spread, but hadn’t heard about the risk of potential blood poisoning.

“This frightening case shows us that sepsis strikes indiscriminately and can affect anyone at any time,” Dr. Ron Daniels, chief executive of the U.K. Sepsis Trust, told The Sun. “Whenever there are signs of infection, it’s crucial that members of the public seek medical attention urgently and just ask: ‘Could it be sepsis?’”

Sienna is now home recovering after five days in the hospital. (Jodie Thomas)

Thomas said that Sienna has been home recovering from the incident, but is still being monitored for any potential complications.