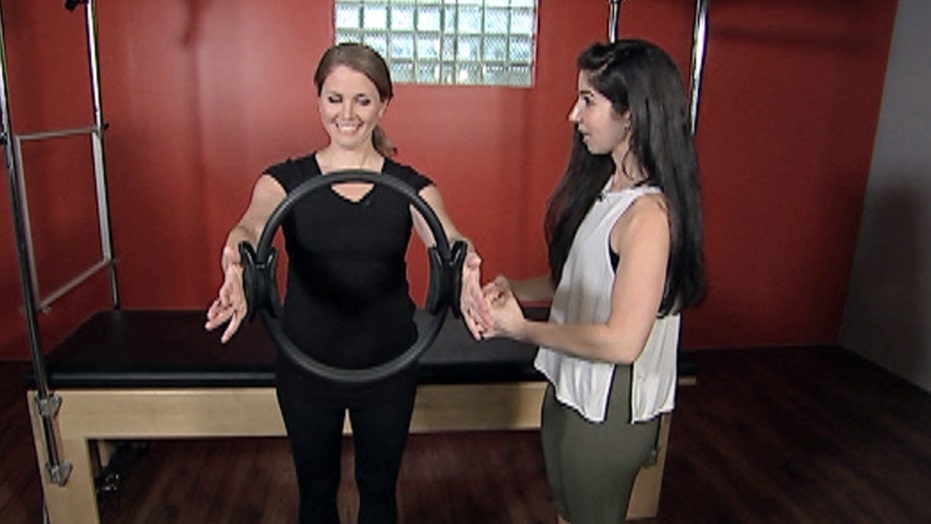 Jenna Lee, co-host of Fox News’ ‘Happening Now,’ has always been active. Now that she is anticipating her second child, she turned to Pilates to keep fit

Fox News’ Jenna Lee has always been an active person, having completed the Marine Corps Marathon, the New Jersey Red Bank Triathlon and a Tough Mudder. Though she’s currently expecting her second child, pregnancy has limited her mobility but hasn’t prevented her from staying healthy and in shape.

Lee teamed up with Andrea Van Zile for prenatal Pilates, which focuses on the core like regular Pilates. While some women tend to avoid core exercises during pregnancy for fear of harming the baby, Van Zile said it is all the more reason to focus on core more, especially because during pregnancy the rectus abdominals naturally separate.

“If you think about it, it’s like wearing a button up shirt,” Van Zile told FoxNews.com. “When you crunch forward, what happens to the seams? They separate.”

Van Zile recommended an exercise called “Hug the Baby,” which involes inhaling while pushing the stomach out and then exhaling while pulling the stomach in toward the spine. It allows women to narrow the waist and strengthen the spine, helping to prevent further separation of the rectus abdominals which can be difficult to recover.

Van Zile recommended a number of exercises for expectant moms that are both safe and help to promote a health lifestyle:

Women should be careful not to lock any of their joints while doing these exercises because they can cause hyperextension. Doing so could cause future injuries.

“We never want to lock out our joints, ever,” Van Zile said. “Especially during pregnancy, you have relaxin, that hormone running through your body that just makes you more hypermobile.”

Working out during pregnancy can also help improve the baby’s health. According to researchers at the University of Montreal in Canada, women that exercise during pregnancy may increase the development of their unborn baby’s brain. Scientists also believe that babies of active mothers have better cardiovascular systems from an early age.

Before starting any exercise regimen, women, especially those who are high risk, should consult with their doctor. Mothers should keep a dialogue going with their doctor throughout their pregnancy so their workout can be adjusted as the baby grows bigger.