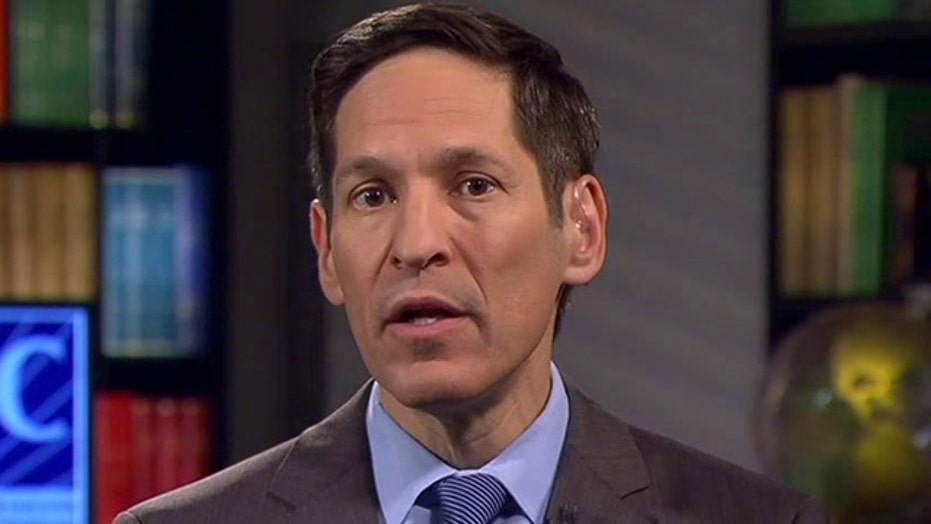 CDC Director: 'Our information is clear and correct'

Dr. Tom Frieden defends how the CDC is handling Ebola

When I recently called for the resignation of CDC director, Dr. Tom Frieden, some of you may have thought I went too far. And yet here we are, facing startling claims that the Dallas medical staff who responded to the first patient diagnosed with Ebola in the United States – including a nurse who is now hospitalized with the virus – had limited protocols in place.

America, if you weren’t worried by Frieden’s inadequacy before, you should be now.

The National Nurses United organization spoke out on behalf of nursing staff at Texas Health Presbyterian Dallas who said they were in the hospital when Liberian national Thomas Eric Duncan arrived exhibiting Ebola symptoms. The nurses administering the shocking claims about the government's failure to issue proper guidelines and training elected to remain anonymous due to concerns about losing their jobs.

Allow me first to start with what might be seen as a minor oversight under different circumstances, that unfortunately now has dire implications. The nurses claim they were not mandated to attend Ebola virus training seminars; rather the seminars were treated like any other. And due to CDC guidelines that “have been changed several times,” the nurses were allegedly told by hospital staff to choose which guidelines they wanted to follow.

All along, we have heard Frieden claim that any hospital in the U.S. is prepared to handle Ebola, and yet when Duncan returned to the hospital by ambulance after initially being sent home with an elevated temperature, the staff failed to isolate him until a nursing supervisor demanded he be isolated. According to the nurses’ claims, Duncan was kept for “several hours” where other patients were present.

How these shortcomings will eventually play out, we cannot know for sure. What we do know, is that Nina Pham, a 26-year-old nurse who treated Duncan up until his death is battling Ebola after contracting the virus. Frieden initially referred to her infection as the result of a “breach in protocol,” which according to the National Nurses Organization could have been a number of factors, starting with Freiden.

According to the nurses, isolation suits were not available when Duncan was admitted to the hospital. The nurses said they wore generic gowns, three pairs of gloves, surgical masks, and were given face shields, which supervisors said were optional. The nurses claim their necks were exposed and they were not provided with surgical booties.

Does that sound like proper protection or protocol for a virus that can be transmitted through blood and other bodily fluids? Even more shocking, the nurses claim that proper protection was not available until at least three days later, even after Frieden’s CDC officials visited the hospital.

I have been very vocal about my lack of confidence in Frieden’s ability to handle Ebola in the U.S. before, but it is important to recognize that I am not alone. A recent SERMO poll of my physician colleagues found more than half of them do not believe Frieden is capable of properly tracking Ebola contacts in the U.S. Further, the poll found 52 percent are either self-educating or speaking to their peers – not being instructed by the CDC – on how to prepare for a possible Ebola patient.

So while you may have doubted my initial calls for Frieden to resign, I’ll ask you in light of these new revelations to reconsider. Ebola is in the U.S., and Frieden is late to the game. Any breach of protocol in Ebola response should be seen as a failure to perform by Frieden’s CDC, and we should actively be searching for his replacement.