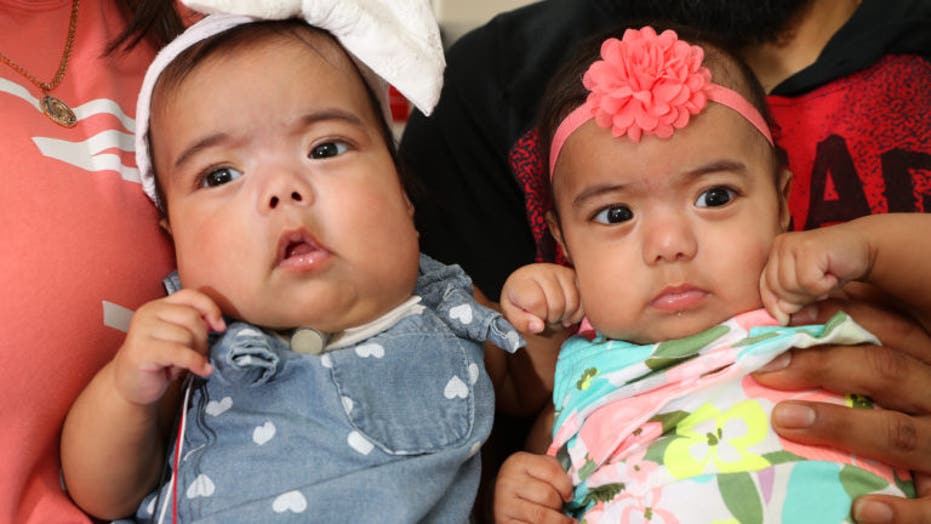 An expectant mother in Chicago said she would do whatever it took to bring her girls safely into the world after she learned that a mass was growing on one of her unborn babies' necks, putting both her and her twin sister’s health in potential jeopardy.

Although the mass was determined to be a teratoma tumor, which is not cancerous, it was restricting baby Jenessa’s airway and causing fluid buildup in the womb, while also putting potential stress on their shared placenta.

But doctors at The Chicago Institute for Fetal Health at Ann & Robert H. Lurie Children’s Hospital of Chicago miraculously were able to partially deliver Jenessa through an ex utero intrapartum treatment (EXIT) at 29 weeks gestation to place a breathing tube in her airway and IV in her hand, all while her twin sister, Genesis, remained unaffected in her mother’s womb, according to the hospital’s blog.

Baby Jenessa is pictured moments after her birth before surgeons successfully removed the mass that had been restricting her airway and jeopardizing both her and her sister's health. (Lurie Children's. )

“We brought the upper torso, the neck and the arms out to be able to get access to the airway, the windpipe, as well as to the hands, and to be able to put an IV in and to monitor the baby’s oxygenation and heart rate,” Dr. Aimen Shaaban, who led the 40-person team, told WGN9.

Throughout the procedure, Janessa’s umbilical cord remained attached, until the pre-surgical prep was complete and doctors delivered her completely.

The girls, pictured with their parents and Dr. Aimen Shaaban, were finally reunited Thursday for the first time since their December birth.  (Lurie Children's. )

She was then immediately whisked from the delivery room to the operating room where they removed the mass, which had grown to nearly the same size as her head. Genesis, who was being monitored carefully while surgeons worked on her sister, was born immediately after Jenessa’s birth. Both girls spent several months separated in the NICU, with Genesis first getting released in March, and mom Theodora Flores finally able to pack up Jenessa’s room this past Thursday.

“I’m so happy for her,” Shaaban, said, according to the hospital’s blog. “She told us the most important thing is that she takes home the babies that God gave her. And she has.”

Doctors believe that Jenessa will eventually grow strong enough to breathe and eat on her own.  (Lurie Children's )

While Jenessa headed home with a tracheostomy tube and gastronomy tube, her medical team believes she will one day be strong enough to get rid of both, according to the hospital’s blog.