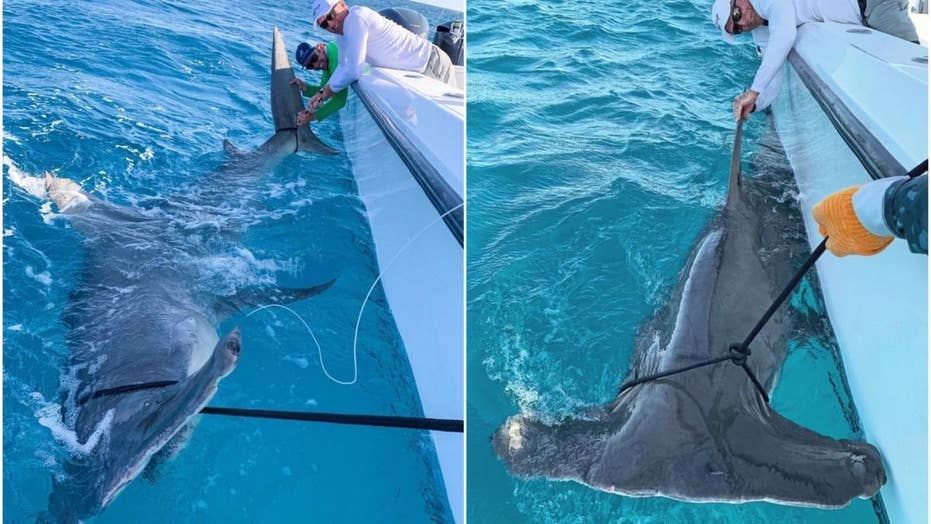 Australian golf legend Greg Norman lived up to his nickname, the "Great White Shark," during a recent fishing expedition.

The 64-year-old athlete, who has won more than 90 tournaments across the globe, reportedly used a fishing rod and reel to hook a catch of a lifetime: a "monster" hammerhead shark.

"One of the most incredible things about nature is to expect the unexpected," said Norman in the YouTube video, which has already garnered more than 1 million views.

The producer of the show, Joshua Jorgensen, used a drone to monitor the massive school of blacktip sharks circling their boat. While reviewing the drone footage, Norman and Jorgensen spotted a giant hammerhead stalking a blacktip shark.

"I've never seen that ... But to see a hammerhead chasing a blacktip was kind of unique," Norman added.

"It was the most incredible scene I’d ever witnessed."

Moments later, the pair realized they had hooked a blacktip — which apparently caught the eye of the hammerhead.

"All of a sudden this giant hammerhead came flying in on the blacktip. It was the most incredible scene I’d ever witnessed," Norman said.

Video footage shows the large hammerhead slowly swimming behind the 80-pound hooked blacktip shark. Eventually, it starts circling the fish and hovers over it before chomping down.

The hammerhead briefly releases the blacktip before swallowing it whole.

"He comes back around, picks it up again, all the sudden just swallows this 80-pound shark and took off," explained Jorgensen as he shows the "screaming" reel. "It's a monster!"

Norman then took control of the reel and started slowly working to bring the shark in. The captain of the 41-foot boat then explained the crew was getting "towed" by the hammerhead, which they estimated to be about 14 feet, 7 inches, tipping the scale at "well over" 1,200 pounds.

“When you start thinking about the poundage that this fish is pulling around — not just the boat but the people on the boat and the fuel on the boat — that is an impressive statement about the energy and the power of these magnificent animals,” Norman described.

After a nearly hour-long fight, Norman was able to pull the hammerhead to the side of the boat.

"The size of this shark was massive, larger than we imagined!" BlacktipH captioned, in part, the roughly 11-minute video of the adventure. "[It's literally] the largest hammerhead shark I've ever seen!"

When they finally grabbed a hold of the shark's fin, they took some measurements and posed for pictures before releasing it. At the end of their trip, the crew jumped into the water next to the hammerhead.

"Why? We wanted to feel connected to this fish," Norman said. "We wanted to make sure this fish felt like, 'Okay, these guys are really trying to revive and get me going.'"

Norman then confirmed the shark "lived," "ate" and then "she swam away."

In the video, Jorgensen claims the hammerhead is four inches longer than the current world record.